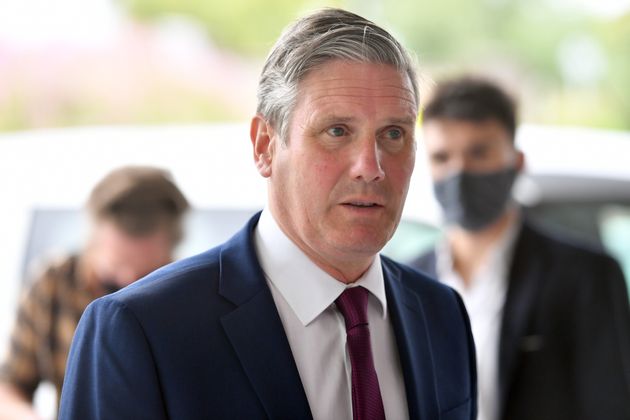 Brexit’s back and in some ways it feels like it never went away. Boris Johnson threatening to walk away, Brussels talking about peace in Northern Ireland, MEPs accusing London of behaving irresponsibly.

There’s more than a little Groundhog Day feel to it all. So much so that one Labour source told me: “I woke up sweating this morning with post-traumatic stress syndrome, just because I heard Katya Adler talking on the radio about Brexit negotiations. Here we go again…” Instead of hearing ‘I Got You Babe’ as the alarm clock hit 6am, what they got was ‘I Got EU, Babe’.

For those who don’t follow every twist and turn of life at Westminster, the sudden re-emergence of the B-word was sparked by two events: the PM putting out a statement that leaving the EU without a trade deal would be a “good outcome” for the UK; plus the FT leak that legislation this week will radically reverse key elements of the withdrawal agreement on Northern Ireland.

There are plenty inside and outside the Tory party who think this is all a bluff, yet more brinkmanship to create the impression that the UK is forcing a change in the pace of talks, when in fact it is preparing for both sides to make pragmatic concessions. The PM talks about 36 days left to sort it, but that’s in fact the EU’s own deadline, it appears.

The idea that this is all theatrics is backed up by some government sources who claim that Brexit negotiator Sir David Frost recently confided to colleagues: “We need to have a bust-up with the EU, then get a deal”. The fact that the FT’s story was not subject to any fire and brimstone from No.10 also fuelled suspicions that it was planted in some way or other.

On the other hand, there’s genuine anger within No.10 at Brussels’ refusal to engage in talks on state aid and other areas. Cabinet minister George Eustice captured that frustration when he said this morning “they are in denial about what it means to be an independent country”. Some close to the PM point out his Greenwich speech way back in February explicitly raised the prospect of the UK “prospering” with an “Australia” deal (ie no deal).

Genuine too is Dominic Cummings’ belief that UK freedom on state aid is needed for investment in hi-tech industries and artificial intelligence. Don’t forget that early on in his job, the PM’s chief of staff told bemused spads that the government could be remembered more for “radical science” than for Brexit itself. State aid allows him to align his twin interests.

One Brexiteer former cabinet minister told me recently: “Singapore-on-Thames was all [Phillip] Hammond. In reality, we may need more state aid, not less, in some areas.” If the UK got its way it could indeed look like Berlin-on-Thames, given that Germany spends much more of its GDP on state aid than even France (and certainly more than the UK has).

Then again, despite Cummings’ lofty ambitions for a new British Apple or Tesla, some in Whitehall believe the real agenda is about paving the way to prop up ailing firms in the Midlands and north. Which brings us to the raw politics and for some in government the extra byproduct of all this Brexit chat: forcing Keir Starmer’s Labour to break its Trappist silence on matters Europe.

With even new Lib Dem leader Ed Davey saying the idea of his party campaigning at the next election to take the UK back into the EU is “for the birds”, some senior Tories are determined to hammer Starmer on just what he would do if he was PM right now. In a nutshell, what’s his message to the ex-Labour voters who are now the mortar in the Blue Wall?

Conservatives thought it significant that the person who spoke for Labour overnight and through today was not Starmer, not Rachel Reeves (who shadows Michael Gove, himself the Brexit secretary in all but name), but shadow Northern Ireland secretary Louise Haigh.

None will say it publicly, but some Tories think that most Brexit voters simply don’t care much about the Irish question, or the peace process, and have no real clue about the “NI protocol”, just as long as the UK got the heck out of the EU.

Similarly on ‘no deal’, these Tories think Brexit voters see things very simply: if the EU won’t play ball, then sod ’em. Moreover, the two CCHQ attack lines against Starmer are that he’s both too “lawyerly” (code for lacks passion, is too finickity, is a London liberal) and an entrenched “Remainer” who had the gall to ask them to vote again. Even some on the Left of Labour have suggested Starmer formally “apologise” to Red Wall voters for backing a second referendum so enthusiastically.

Labour’s line overnight, that tearing up the Withdrawal Agreement would mean reneging on “the UK’s legal obligations” internationally, is seen by some Tories as further proof of the lawyerly approach. They think the politics on Brexit instead often comes down to not laws but gut dividing lines: ‘whose side are you on, ours or Brussels’?’

So, what will Starmer do? And is this the one ‘culture war’ issue on which he can be finally nailed by Johnson? Well, I’m told he intends to stick to what’s defined his leadership so far, combining strategic patience and a focus on the next election with a determination to fight battles on his own terms, not those laid as a trap for him.

Earlier this summer, Starmer repeatedly avoided answering whether he would back an extension to Brexit rather than ‘no deal’. His line was that the government has a majority of 80 and the country’s fate is in Johnson’s hands, not his. Expect more of that. Just as he hasn’t come up with an alternative roadmap on coronavirus, he won’t be coming up with his blueprint for UK-EU relations this far out from a general election.

But Starmer also knows that some Tory MPs in Red Wall areas fear that no-deal Brexit will hit their constituents hardest. Manufacturing, including carmaking, will be hit hard just when it’s on its back from Covid. Eustice was candid enough to admit today that no-deal would mean huge tariffs on our farming exports.

“He does things on his own terms, that’s his style of leadership, and it’ll be the same on this” one key ally says. During the Labour leadership, the trans issue was a case in point, when he had his own line that “trans rights are human rights” rather than endorse a list of others’ demands. A snap YouGov poll tonight suggested that among Tory voters and Leave voters overall, only 50% backed no deal.

Add in the inevitable Starmer charge that no-deal will expose Johnson’s untruths about an “oven ready deal” in the last election, and there’s a distinct sang froid among the Labour leader’s team. The focus is on the next election, and on making sure there’s no Groundhog Day of 2019.

“I will not back down”

Boris Johnson, on the prospect of ‘no-deal’ in EU trade talks, in an email to Tory party members

For the second day running, the UK saw nearly 3,000 recorded cases of Covid-19.

Richer young people are one of the biggest drivers of the recent spike in coronavirus, Matt Hancock said, as he urged people “don’t kill your gran”. But some experts believe stats for young people were massively underestimated earlier in the pandemic.

People arriving in England from seven Greek islands will have to quarantine for 14 days, transport secretary Grant Shapps announced. He also suggested he was looking at cutting the two-week quarantine period to around 8 days with new testing regimes.

No 10 confirmed the new UK Internal Market Bill will be published on Wednesday but denied it would tear up the Withdrawal Agreement and featured “minor clarifications in extremely specific areas”.

Foreign secretary Dominic Raab summoned the Russian ambassador to register the UK’s “deep concern” over “the poisoning of Alexey Navalny with a chemical nerve agent from the Novichok group”.

Can Europe Learn From Japan? – CapX

Over 65,000 meals were discounted in Rugby & Bulkington during August thanks to the Chancellor’s scheme