It’s a long story involving online college Jeopardy, the University of Colorado at Boulder and too much cheap vodka, but suffice it to say that late one night in the fall of 1999, when I was newly 18, I got the Republican elephant tattooed on my body.

For a while, I was quite pleased with that decision, willingly going to battle against my liberal friends and roommates, always leaning on my conservative values of fiscal responsibility, limited government, personal accountability and private sector efficiencies.

Fast forward 21 years to an all-time high deficit, beyond questionable extensions and abuses of federal power, astounding private sector corruption, and a president who insults everyone who calls him out on his lies as fake, weak, nasty dummies, and my previous Republican defences are out the window. That little red-and-blue pachyderm represents something different today than it did at the end of the Clinton years.

This isn’t the first time I’ve thought about removing my one and only tattoo. I sent emails inquiring about laser removal when Donald Trump won the GOP nomination in 2016, having been against his selfish slash-and-burn business practices for years and certainly opposed to his total lack of moral character. But I didn’t really think he’d get elected. My party, you see, likes morals and hard work and fairness. There’s no possible way, I thought, that my fellow Republicans could vote for this guy.

You know how this story ends, but yet, it’s not over. I was confused four years ago, and I’m even more confused now.

To me, Trump is about as un-Republican as someone can get. So why are we rallying around this guy? Here, a quick roundup of the proof that his values don’t align with those of traditional conservatives: He allowed unmarked federal agents to detain protesters in Portland, Oregon (someone should brief Trump on federalism). He convinced his fans that credible media outlets are the public’s greatest enemy, when our founding Republicans, or anyone with sense, will tell you that the media are the everyday citizen’s greatest weapon. He continued to allow already vulnerable children not just to be separated from their parents when they tried to immigrate to the US, but to be locked in cages. He suggested delaying the November election (totalitarian, anyone?). Then there’s the spending — my God, the spending ― and trying to limit states’ rights to regulate drugs (again, federalism). Not to mention engaging in childish tweet wars; presenting America as a selfish, dumb bully to the rest of the world; the nutso trade deals; and, oh yeah, the whole publicly-mocking-a-disabled-person thing. (Sadly, as an American, I’ve already been conditioned to expect my leaders to be sexual predators, so I won’t even go down that road.)

For the so-called Republicans who don’t think I’m really a Republican in spite of marking myself with our symbol, know this: I’m all about the tax cuts; I hated Barack Obama’s health insurance requirement and was thrilled it got (essentially) repealed; I’m pro the Second Amendment, capital punishment and capitalism; and I’m anti abortion, lofty minimum wages and bankrupting our country. I believe in individual freedoms, like praying in school or marrying anyone you want.

Increasingly, though, my little elephant represents overreaching government power, empty moral soapboxing, racism and a lack of regard for anyone who doesn’t fall in line with the powers that be. Some of this may have existed within the party long before Trump, but now it’s taken over. The racism, especially, I ignored for too long — resting on my laurels as a member of the party of Lincoln that ended slavery — but that small sector of our party has swelled and taken over, and I can no longer ignore it. 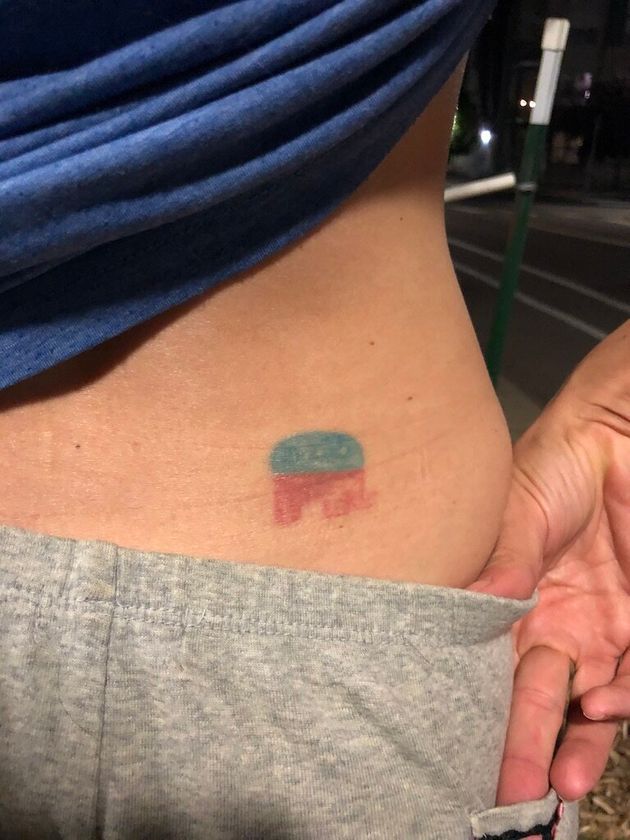 I know there are others out there like me. Republicans who gravitated to the party for those same conservative values that I used to wield like swords against my liberal friends: fiscal responsibility, limited government, personal accountability and private sector efficiencies. Trump and too many of the conservatives speaking for us over the past several years share none of these values.

My hope has been that the traditional Republicans would step up and take back control, talking common sense to a president who has none, denouncing the spending, the racism, the atrocities, the incendiary comments, the overreaching government power. But that hasn’t happened. The radicals speak like they’re the majority of the GOP, and I’m finally believing them.

Our party has been hijacked, and I think our best chance of getting it back is to not vote for Trump. We need to send the message that a candidate like this is unacceptable. If Trump-despising Republicans vote for him because we’re afraid of the alternative, our party will slip further and further away. If we want a chance at a decent candidate four years from now, we need to let this one go.

I’m not saying we should all vote for Joe Biden ― I don’t plan to ― but if we choose a third party that aligns more with our core values (like, say, the Libertarians), we can actually make a difference and steer our party back in the right direction.

For now, though, it’s time for my elephant tattoo to go. I’m no longer an 18-year-old kid drinking too much cheap vodka, and in fact, I’ve got kids of my own. Hopefully, by the time they’re 18, the GOP will be something worth inking again.

She Split Up With A Cop. Then He Had Her Arrested – 10 Times

How Dirty Is Cash Anyway?