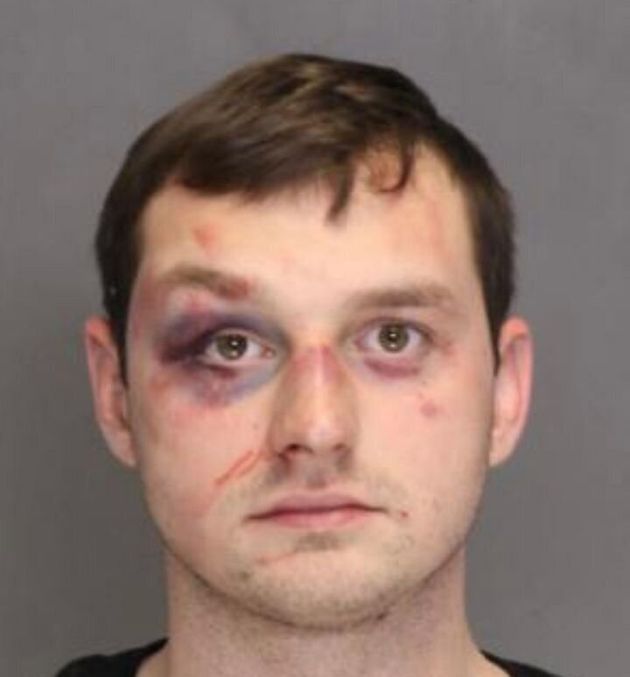 A Maryland judge on Wednesday sentenced white supremacist Brandon Higgs to four decades behind bars for charges related to the 2018 shooting and wounding of a Black man, with part of the sentence suspended.

John Magee, the prosecutor for the Baltimore County state’s attorney’s office, told HuffPost that the judge in the case suspended 15 years of the sentence during the ruling, meaning Higgs will likely serve 25 years behind bars, plus five years probation.

The 26-year-old former Navy cryptologist was found guilty in January of first-degree assault, attempted voluntary manslaughter, hate crimes and related firearms charges stemming from the 2018 shooting in Reisterstown, a suburb of Baltimore.

“He’s got a long time to think about the shit he did,” Elvis Smith, the man Higgs shot, told HuffPost after leaving the sentencing hearing Wednesday morning. “So I’m happy.”

The shooting received national attention because of the heinous nature of the crime, and because private online chat logs obtained by anti-fascists showed Higgs was active in organised white supremacist groups and had expressed a murderous hatred for Black people, particularly those in the Baltimore area.

On Dec. 20, 2018, 60-year-old Smith and 48-year-old Robert Peete were at work laying concrete on a driveway outside a house in Reisterstown. A dog belonging to Higgs, who lived nearby, got loose and ran through the wet concrete. The three men exchanged some angry words before Higgs returned home.

Higgs re-emerged outside minutes later carrying a loaded gun and made racist remarks to Smith and Peete. “This is my hood,” he said, using a racial slur. He added: “Black motherfuckers, go back to Africa!”

A shoving match broke out between Smith and Higgs, before Smith hit Higgs with a small rake used for smoothing concrete.

Higgs then drew his gun and a tussle over the weapon ensued. Peete told HuffPost he remembers Higgs pointing the gun directly in his face. Peete said he managed to get out of the way of the weapon.

At some point during the struggle, the gun went off, the bullet ripping through Smith’s leg and obliterating his tibia. (At Higgs’ trial later, it was never established whether he fired the gun or it went off accidentally.)

Smith and Peete then managed to disarm and restrain Higgs until police arrived.

As Higgs awaited trial, where he pleaded not guilty to a slew of charges, anti-fascists uncovered comments Higgs had made in private neo-Nazi chat groups, including a group for people planning to attend the deadly 2017 “Unite the Right” white supremacist rally in Charlottesville, Virginia. The comments, some of which are quoted below, included racial slurs.

“I decided I’m going to create my own group called Baltimore Animal Control and buy those dog patrol poles with the snare at the end and wrangle niggers with it,” Higgs wrote in one post.

“Also want to leave bear traps in Baltimore city with buckets of KFC chicken,” he wrote in another.

Higgs also referred to Dylann Roof, the white supremacist who in 2015 massacred Black worshippers at a church in Charleston, South Carolina, as “St. Roof” on the message boards.

At his trial earlier this year, Higgs appeared in court in a red prison jumpsuit, his tattoo of a yellow identitarian lambda ― a white nationalist symbol ― visible on his arm.

Court records show that since being found guilty in January, Higgs has also been charged with multiple misdemeanours he allegedly committed while incarcerated, including one charge of possession of narcotics with the intent to distribute.

Magee, the prosecutor in the hate crime case, said these drug-related charges are still pending and did not affect the sentencing on Wednesday.

Smith received a metal implant in his leg as a result of his injuries, the pain from which makes it hard to work as a concrete mason. He told HuffPost on Wednesday that he’s looking forward to taking a long vacation now that this case is behind him.