What The Primary School Day Could Look Like From September

What The Primary School Day Could Look Like From September

September is almost here and with it a new school year. But with Covid-19 still doing the rounds, what will a typical day look like for primary school kids?

The virus has given headteachers and school staff plenty to think about in terms of how they make the learning environment as safe as possible for pupils.

While going back to school isn’t risk-free, studies suggest the risk of children of this age becoming physically ill and spreading the virus around are low.

That said, teachers have had to take plenty of precautions to ensure schools are as safe as can be – and that means moving or removing some of the central building blocks of the school day.

The post-Covid school is one where in-person assemblies will become a thing of the past, sanitising stations are attached to every door frame, and lunch and break times are staggered, with classrooms becoming makeshift canteens to keep year groups separate.

Where once primary schools encouraged collaboration and companionship between year groups, Covid-19 leaves them with no choice but to segregate school years to keep children – and, by extension, their families – safe.

UK government guidance says there is not a ‘one-size-fits-all’ approach in terms of how schools reopen, but there are details emerging about how the school day will change for most.

HuffPost UK spoke to three headteachers about the changes on the horizon – and what parents and kids alike can expect.

Getting hundreds of pupils into one building at the same time seems like a social distancing nightmare, which is why some schools are planning on staggering start times. Where this is the case, parents will be notified by their school about the time they need to arrive with their child.

Some schools are choosing not to stagger the start time, however, so that parents aren’t put under pressure to shift their working day.

Rachel Tomlinson has been headteacher at Barrowford Primary School in Lancashire for 12 years. At her school, children from different years will be expected to enter and exit at specific entrances instead.

She tells HuffPost UK: “We’ve got enough doors and enough space for parents to socially distance while they’re dropping off and picking up.”

Sarah Shirras, headteacher at St William’s Primary School in Norwich – a post she’s been in for six years – has also chosen not to stagger start times as she says it would be more “complicated” for parents, who would likely end up gathering around the school gates.

To reduce the risk of contamination, it’s highly unlikely schools will allow parents in the actual school building come September. Instead, they will be asked to drop their children off in the playground or outside their classroom door.

The UK government advises schools to “minimise potential for contamination so far as is reasonably practicable” – and this is one way of doing so.

Tomlinson says this will be a “big difference” for the younger year groups at her school – pre-Covid, parents would have been allowed into the classroom to drop their child off and help them settle in. Instead, they will be asked to socially distance in the playground.

Some parents will have to wave goodbye at the school gates. Allana Gay, who is headteacher of Vita et Pax School in London, says drop-off and pick-up will happen from four different gates at her school – “siblings can enter together if very young but are limited to their own area after entry,” she says.

Parents have been very supportive in ensuring they distance well while waiting, she says, adding that they won’t be allowed onsite except in an emergency.

Large numbers of people gathering in the same room is a definite no-no in the Covid era, meaning assemblies are either being scrapped or reduced. “The biggest difference will be no assemblies, no big gatherings,” says Tomlinson.

Pre-Covid, Barrowford Primary School had two whole school assemblies per week – singing on a Tuesday (an activity which is now advised against in large groups) and a celebration assembly on a Friday, which parents could attend.

It will still be hosting the assemblies, but year groups will remain in their classrooms and the event will be streamed using Microsoft Teams.

Shirras, whose school used to have assembly every day, says St William’s Primary won’t be holding assemblies at all due to the risk. Instead, it will stream short films with a social or moral message for children in their classrooms.

Vita et Pax School will also be doing assembly via virtual connection to each classroom. “Teachers host their own live class assembly every Friday,” she says. “The class celebration news is shared via the weekly school newsletter.”

Given how hard it is to get young children to keep apart, classes will be grouped together in ‘bubbles’. In some cases, especially where numbers are low, two year groups may be put into one bubble so they can interact with each another.

Staff are still advised to keep 1m away from children and other staff, as per government advice. A study by Public Health England about schools reopening in June found staff members were more likely to be affected by the virus than students, though not more likely than the general population as a whole.

Hand washing as a priority

The government advises “robust hand and respiratory hygiene” in its back to school guidance – and schools have taken note.

Hand-cleaning will be strictly monitored throughout the school day with children asked to wash their hands on entering the school, after using the toilet, before and after lunch, after playtime, and at home time.

Shirras says there are sanitisers on every doorframe in her school and 16 new hand basins have also been installed, with paintings and collages surrounding them to help them feel part of the environment. The aim is to make frequent hand-washing a normal part of the school day. 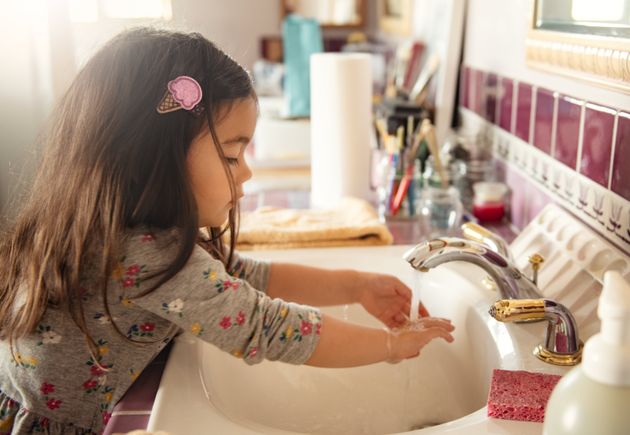 Lunch break with a difference

Lunch breaks might be staggered in some schools to enable students to get their lunch safely – and without mixing with other classes. Allana Gay says: “Playtimes and lunch are staggered with set 25 minutes eating time to allow cleaning to happen between sittings.”

Some schools are concerned about rushing kids to eat their lunch, so they will be encouraging children to have lunch in their classrooms. This is something Tomlinson’s school already did pre-Covid – and it worked well. The children go and collect their lunch from hatches, she says, and take it back to the classroom. Lunch is served to one class at a time.

Shirras says her pupils will also have to eat lunch in their classrooms going forward, despite the school having two dining halls. The halls would otherwise have to be cleaned between each year group’s sitting and this would take a lot of time. “Classrooms are the better option to start with,” she says.

Some classes – particularly early years groups – might move outdoors to minimise the risk of the virus spreading. Gay says her students will have “story time, numeracy and phonics happening in an outdoor classroom set-up.” Weather permitting, of course.

With contact sport (think football, netball, basketball) still not allowed in schools, this will inevitably mean PE lessons, sports days and after school clubs will be forced to change. It’s highly likely they’ll be held outside as much as possible too to keep germ transfer to a minimum.

The good news is that breakfast and after-school clubs should still continue – however it’s likely they’ll have to be held in year groups in order to keep kids within their bubbles. And they will obviously depend on teacher availability.

All schools have been urged to introduce “enhanced cleaning arrangements” by the government, which means surfaces and toilets cleaned regularly throughout the day – on top of any standard cleaning regime. Teachers will have their own disinfectant sprays to wipe down door handles, classroom items and other touch points.

“Hygiene is a priority,” says Gay. Pupils at her school will wash their hands on entry and also have their temperature taken, she says. “Every class has sanitiser, tissues and cleaning spray for their desks.”

Children will have their own equipment – such as pens and pencils in pencil cases, and their own books – so there’ll be no sharing of items to reduce the risk of passing the virus on.

It’s likely the first parents evening of the year will be held virtually to minimise the risk to teaching staff from meeting several sets of parents from different households. In fact, it’s likely most ommunication with parents will shift online.

For example, Tomlinson’s school is hosting an online Q&A with parents before they reopen so they can resolve any fears or worries. She plans to host an online parents evening in October.

Shirras says her school will primarily be contacting parents via email and phone – “it won’t feel the same,” she says. “For new families it will be quite a hard introduction to school.”

The biggest challenge, says Gay, is getting parents to feel confident in the measures taken in schools, as this confidence will determine attendance.

Her school reopened in July to allow children to catch up. “Having had the school back fully throughout July with no incident has bolstered confidence,” she says. “The biggest detractor is the public messaging which is confusing and panics parents around the wider Covid-19 picture.”

If your kid is sick, they must stay home

With Covid there is no room for error, which means if your child is sick with a persistent cough, fever or loss of taste/smell, they will have to stay home and self-isolate for a minimum of 10 days. If you’re unsure, it’s better to be safe than sorry and keep them off school to get tested.

Donald Trump Jr. Fears His Dad Is Going To Lose The Election: Report