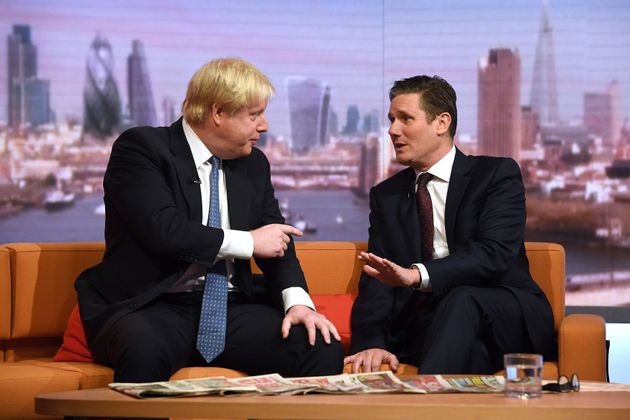 “This is a war against an invisible enemy, in which we are all on the same side”. In his first Covid update for MPs since the long summer break, Matt Hancock’s political gameplan was clear: seize the moral high ground and depict the hardest edged Labour attacks as mere carping during a national emergency.

But health shadow Jonathan Ashworth’s list of critical questions – on continued Test and Trace failings, on Tory MPs having more say over local lockdowns than public health chiefs – underlined that Labour is very much Boris Johnson’s all-too visible enemy in many senses, and certainly not on the same side of key dividing lines. While Starmer’s party is trying to be a ‘constructive’ Opposition, it never forgets it is the Opposition.

And although Hancock said “what people want to see is people working together, instead of divisive tactics”, and he largely had Tory backbench backing, there was an undercurrent of unease on his own side.

Bernard Jenkin asked whether “political appointee” Dido Harding would be replaced as the head of PHE’s replacement by “a properly appointed public appointments-approved person”. Ex-public health minister Steve Brine had “concerns” about PHE’s expertise on obesity and inequality being lost. Jeremy Hunt pressed on the bruise of a lack of routine testing of NHS, social care staff and teachers.

Hancock (who did suggest mass testing could be possible soon) faced more critical questions from his own side than Gavin Williamson did when he rose for his own statement minutes later. There was clearly a whips operation to circle the wagons round the education secretary, as evidenced by the regular heckling of his new opposite number Kate Green.

Williamson was more punchy than Hancock, yet palpably less sure-footed. He jibed at Green that it was the government itself which had invited Ofqual in July to look at delaying next year’s exams, even suggesting that the postponement was “our position”. That will come as a surprise to Tory MPs who saw a period of confusion this weekend when Labour led the airwaves with its call for a delay, met by government scepticism then reluctant acceptance that a delay should be “looked at”.

Williamson said Green showed “a refreshing change from her predecessor [Rebecca Long-Bailey]” in wanting children back in school, a line that must have pleased her boss Keir Starmer. Indeed Green often sounded more like Williamson’s senior as she admonished him for failing to provide her with sufficient advance notice of his statement.

Like Keir Starmer, Green prefers the quietly forensic approach and it worked. The education secretary simply had no answer to her killer question – could he tell the House when he first knew of the potential problems with the exams algorithm? Given that he was warned internally upto a fortnight before the A level results emerged, yet still went ahead, this is the issue that could still see him toppled. Never forget the sheer anger and panic among Tory MPs when it looked like bright poor students would be robbed of their life chances by a computer model.

But while we got an early assessment of Hancock and Williamson’s record on the first day of autumn term at SW1’s Hogwarts, it was the PM himself who displayed both his strongest and weakest subjects. His strong suit, still liked by many voters, is in putting a positive gloss on things. Recent U-turns were not reverses, he said, but more like a yacht “tacking” in response to a change in the wind while still not being blown off course overall.

As he tortured the ship of state analogy to death, the question is how many Tory MPs are left seasick by the chopping and changing. Making a virtue of occasional U-turns is smart politics (David Cameron was pretty adept at it), making a habit of them is something else entirely. Boris Johnson’s breezy optimism also seemed to transmogrify into actually making things up, as he told the Cabinet that “people are going back to the office in huge numbers across our country”. It all sounded like Trump (“it’s gonna be yuge!”), as even No.10 admitted there were, er, no statistics to back up that claim.

When Starmer addressed the PLP [Parliamentary Labour Party] on Tuesday night for its own first day of term event, there were jokes about who could correctly guess the total number of government U-turns in the pandemic. Starmer told the Zoom call that the shadow team had had a “really strong summer”. The contrast was a “professional, credible and responsible Opposition – in the national interest, versus an utterly incompetent government that’s holding Britain back”, he said.

Labour backbencher Tonia Antoniazzi told me the contrast with PLPs under Corbyn was tangible. “I used to avoid them [PLP meetings] like the plague,” she said but now the atmosphere was “buzzing”. Having taken the seat off the Tories in 2017 in a seat with a strong Brexit voting record, she said voters could live with her argument for a second referendum but “what they couldn’t live with was Jeremy”.

The main worry on the PLP call was the state of the party in Scotland ahead of next year’s Holyrood elections (or “the Hollywood elections” as Angela Rayner accidentally called them, winning what one veteran MP described to me as “the John Prescott deputy leader prize for malapropisms”).

As it happens, however, Rayner is growing into the invaluable Prescott role of firing up the party’s rank and file, its trade union allies (with a surge in members particularly among women in health and care sectors) and its traditional northern supporters.

“They used to say about Prescott, nobody understood what he said but everybody understood what he meant – which is much better than the other way around,” a PLP member told me. Today, it was Rayner who pounced on the PM’s ‘office workers’ claim, saying they “don’t seem to be backed up by any actual figures”.

The line at the PLP however that struck a chord with most Labour MPs came from Kevin Brennan (the party’s best PMQs heckler these days). “Congratulations to you Keir for getting us from the carousel at Katmandu airport to base camp at Everest, in good shape for the long climb ahead,” he said. The contrast with Corbyn was underscored but so too was the mountain that remained.

Labour has finally drawn level in the opinion polls this weekend. Yet perhaps what should worry Tory MPs most is that Starmer and his troops know how long and huge their task really is.

“We seem to have had a few heads roll who are civil servants and in charge in quangos but so far there has been no ministerial accountability.”

Boris Johnson claimed “huge numbers” of people had gone back to the office today. No.10 could not supply any evidence for the statement, and it emerged later that in greater London bus use rose by just 6% and Tube rose by 8% week-on-week.

Downing Street confirmed that Simon Case will take over as cabinet secretary and head of the civil service next week from Sir Mark Sedwill. The PM’s spokesman didn’t deny he had had to seek permission of Prince William (Case was his private secretary on secondment to No.10) to secure his services.

Former Australian prime minister Tony Abbott suggested some elderly covid patients should be made “as comfortable as possible while nature takes its course.” He hit out at coronavirus “hysteria” and suggested governments have “let fear of falling sick stop us from being fully alive”.

Commons Speaker Sir Lindsay Hoyle warned MPs not to “name” in the chamber a Conservative member accused of rape. An MP was arrested on 1 August on suspicion of four separate incidents, involving allegations of sexual offences and assault

Nicola Sturgeon has announced a draft bill will be drawn up setting out the timing, terms and question for a new Scottish independence referendum.

How Trump Has Rewritten The Rules Of Rhetoric – Phillip Collins, CapX

Pregnant Women With Covid-19 ‘Less Likely To Have Symptoms’