Several adverts for three weight loss injection companies have been banned by the Advertising Standards Authority (ASA), who called them “irresponsible” for promoting prescription-only obesity medication for commercial gains.

One of the companies, named SkinnyJab Ltd, came under fire for a post on Instagram by Gemma Collins, which the advertising regulator said was not easily identifiable as an advert.

In April 2020, Gemma shared a video on her Instagram story, where she showed SkinnyJab products and said: “Working on my summer body whilst in isolation …and this really helps me.” 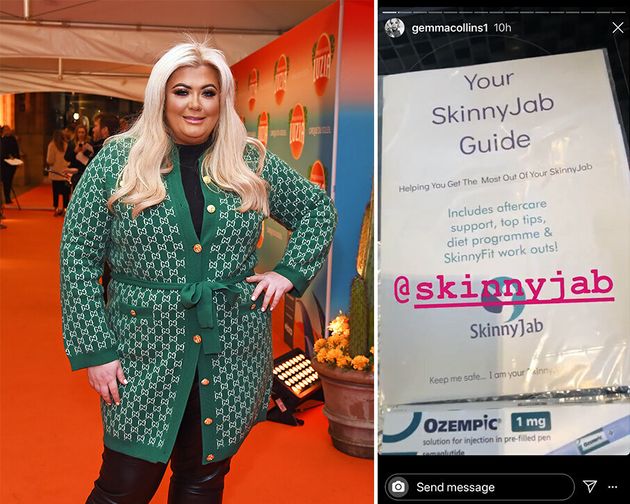 SkinnyJab Ltd and Gemma Collins both claimed their commercial contract had been suspended during lockdown and that no money was exchanged for the post. Gemma’s agent also insisted the video was posted in a “private capacity” and wasn’t an ad.

The ASA were unconvinced by this though, pointing out that Gemma still featured as a brand ambassador on SkinnyJab’s website during this period. ASA ruled that the ad breached advertising rules.

The regulator also investigated other SkinnyJab ads, plus banned ads for the companies Skinny Revolution Ltd and Skinny Clinic.

SkinnyJab, Skinny Revolution and Skinny Clinic were all told their ads must not appear again in their current form, as companies are banned from promoting prescription-only medicines. They each agreed to remove references to the drugs.

Weight loss injections work by using drugs such as liraglutide (sometimes known by the brand name Saxenda) or semaglutide (brand name Ozempic). These drugs work in a similar to the body’s own GLP-1 hormone.

“GLP-1 is produced when we eat and slows down stomach emptying which makes us feel full for longer. It helps control blood sugar levels in other ways too, by stimulating insulin release from the pancreas and reducing appetite,” Dr Sally Norton, an NHS consultant gastrointestinal surgeon and weight loss expert previously told HuffPost UK.

“Whilst GLP-1 lasts a couple of minutes or so in the blood stream, a few tweaks to the chemical make-up have led to the development of the drug, liraglutide, which lasts for around 13 hours, allowing it to be given in daily injections and still have a prolonged effect.”

Medications containing liraglutide or semaglutide are licensed to be prescribed to people with Type 2 diabetes or other obesity-related illnesses, but commercial weight loss companies have been accused of offering the ingredients to people outside of this remit. 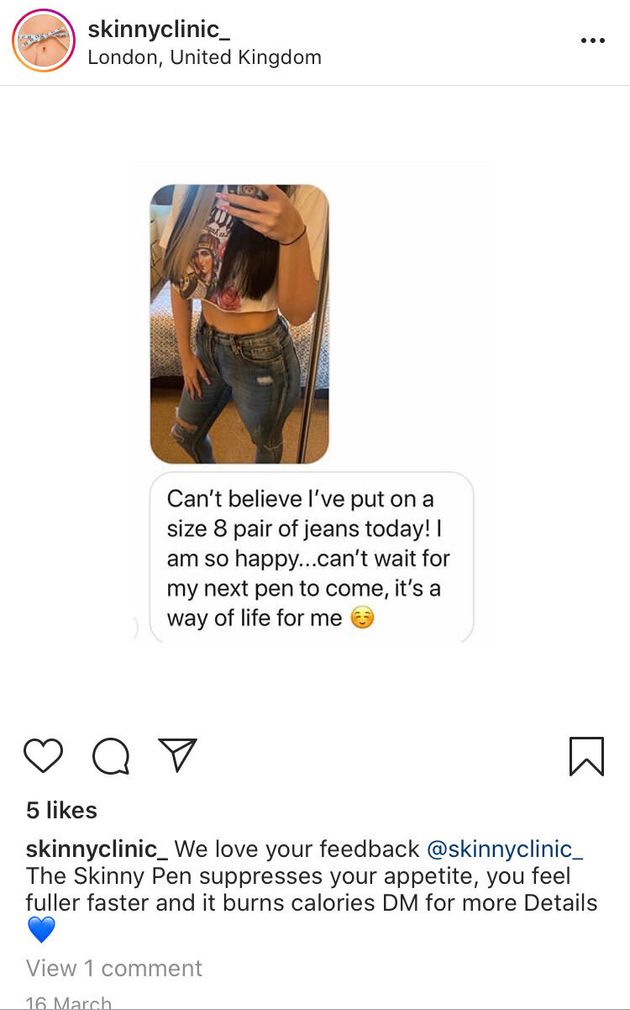 An ad by Skinny Revolution was banned for “exploiting people’s insecurities around body image during lockdown”. The ad featured a “before” image of a slim Barbie doll and an “after” image of an overweight Barbie doll, alongside the caption “Me in Quarantine”.

The caption stated, “Don’t let lockdown knock you back! Use this time to keep working toward your weight loss goal and come out the other side looking AMAZING!!! Skinny Revolution is here to help you. Enquire for more information.”

Another ad by the company stated: “Kerry Katona lost over 2 stone with Skinny Revolution in just 2 short months”. The ASA said that those rates of weight loss “were unlikely to be compatible with good medical and nutritional practice”.

Skinny Revolution Ltd said they had removed all social media posts that made reference to the prescription-only medication Saxenda, but did not provide a response to the other concerns raised by ASA.

A third company, Skinny Clinic, had three Instagram ads and a description on its website banned. One of the ads featured the text: “Can’t believe I’ve put on a size 8 pair of jeans today! I am so happy… can’t wait for my next pen to come, it’s a new way of life for me.”

It was banned alongside another ad featuring a glamour model Jema Gilsenan, because ASA said the posts “implied that the product could be used by people who were not overweight”.

Skinny Clinic said they had removed the ads and would ensure future posts complied with guidance. They also agreed to remove ads referring to Saxenda.

“It is not a sustainable way to improve your health and people should think twice before spending their hard-earned cash on it,” she said. She added that the injections “certainly shouldn’t be an option for those with eating disorders [or other] mental health issues”.