The UK is at a “tipping point” in the fight against coronavirus, a top scientist has warned, as millions in the north of England face a possible ban on mixing indoors and outdoors from Monday.

Prime minister Boris Johnson is set to outline a new three-tiered system of restrictions with measures expected to force pubs and restaurants shut across the north of the country.

Reports suggest under the top tier no household mixing will be allowed either, which could affect millions of people living in areas with high Covid-19 rates across England.

It comes as England’s deputy chief medical officer Professor Jonathan Van-Tam said the country is at a tipping point similar to the first wave of coronavirus, but can prevent history repeating itself, PA Media reports.

He said the best way to keep transmission low and stop the NHS being overwhelmed was for people to follow self-isolation guidance, wash their hands, wear face coverings and social distance.

He added: “Earlier in the year, we were fighting a semi-invisible disease, about which we had little knowledge, and it seeded in the community at great speed.

“Now we know where it is and how to tackle it – let’s grasp this opportunity and prevent history from repeating itself.” 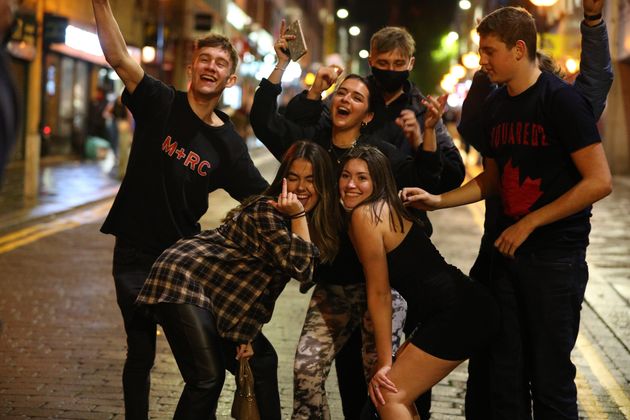 But leaders across Northern England have criticised the plans, accusing the government of treating the region as “second-class” and did not rule out possible legal action.

The Sunday Times reported ministers were drawing up proposals to give town halls more powers over the test and trace system to try to secure their support.

Meanwhile, people could be seen socialising in city centres across the UK – including Liverpool, Newcastle and London – on Saturday evening before pubs in their areas were potentially closed.

It comes as the number of people in hospital with coronavirus increased across every part of England on Saturday – rising to 1,167 in the north west from 725 previous week.

A further 15,166 lab-confirmed cases of coronavirus in the UK were reported on Saturday, and 81 more deaths were confirmed of people who died within 28 days of testing positive for Covid-19.

Separate figures published by the UK’s statistics agencies show there have now been 58,000 deaths registered in the UK where Covid-19 was mentioned on the death certificate.

Under the proposed three-tier system, different parts of the country would be placed in different categories, with areas in the highest level expected to face the toughest restrictions.

The Conservative Mayor of the Tees Valley Ben Houchen said the third tier restrictions are expected to run in four-week blocks, with pubs and bars being required to close and no household mixing will be allowed for socialising either indoors or outdoors.

Real estate adviser Altus Group has said there are 7,171 pubs in areas with restrictions across the north of England at risk of temporary closure.

Chancellor Rishi Sunak announced on Friday workers in businesses which are forced to close under the new restrictions will have two-thirds of their wages paid by the government.

But Greater Manchester Mayor Andy Burnham said that accepting Sunak’s financial package would be to “surrender” people to hardship in the run up to Christmas.

Speaking at a press conference with political leaders from Liverpool, Sheffield and Tyneside on Saturday, Burnham said the measures risked “severe redundancies” and business closures.

Burnham said the government was treating the North as second-class and did not rule out legal action.

He added: “It will level down the north of England and widen the north-south divide.”

The leaders of West Yorkshire councils also warned on Friday that “significantly” more financial support was needed to prevent an even deeper economic catastrophe.

Labour leader Sir Keir Starmer was also critical of the business aid package and said the government had “lost sight of the guiding principle” that restrictions are always accompanied by appropriate economic support.

But the Sunday Times reported plans are being drawn up to give local leaders powers to deploy an army of volunteer contact tracers as well as giving local authorities more control over mobile testing units and walk-in centres.

A government spokeswoman said all financial support will be kept under review, to support businesses and protect jobs over the coming weeks and months.

In North Wales, new coronavirus restrictions were introduced in Bangor at 6pm on Saturday, meaning people will not be allowed to enter or leave the area without a “reasonable excuse” and can only meet people they do not live with outdoors, it said.