Donald Trump has returned to the campaign trail for the first time since being diagnosed with Covid-19, bragging he is now “powerful”, “immune” and joking  he is healthy enough to give a “big fat kiss” to everyone in the audience.

Speaking at an outdoor rally in Sanford, Florida, the US president gave an emphatic defence of his handling of the pandemic that has killed 215,000 Americans, to a crowd observing no social-distancing and little mask-wearing.

“I went through it now. They say I’m immune. I feel so powerful,” Trump told the crowd during his hour-long remarks.

Though he was admitted to hospital battling the virus just days ago, Trump’s message on Covid-19 was unaltered since his diagnosis: a dubious assessment that the pandemic was almost a thing of the past.

Hundreds of people in the US continue to die from the virus every day.

His voice was perhaps a touch scratchy but otherwise, Trump appeared to be his usual self. 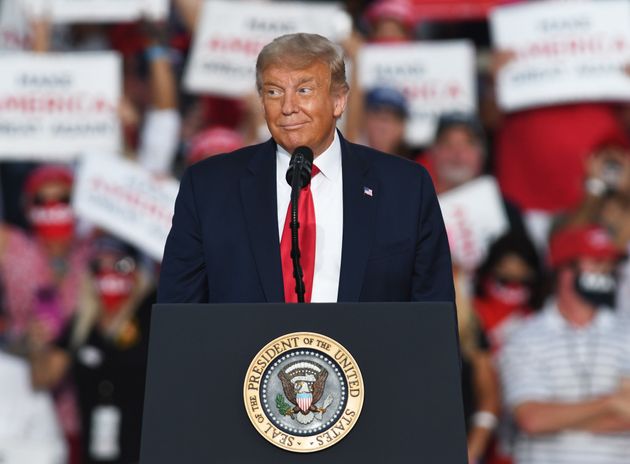 Trump’s return to his signature campaign rallies kicked off a three-week sprint to the November 3 election.

The Republican president, 74, is seeking to change the dynamics of a race that national opinion polls and some key state polls show he is losing to his Democratic rival Joe Biden, who is 77.

Dr Anthony Fauci, the nation’s top infectious-disease expert, told CNN on Monday people who recovered from Covid-19 were likely to be immune for a limited period of time, but there are cases emerging of people being re-infected weeks or months later.

Dr Fauci questioned the wisdom of holding such an event, noting test positivity rates were climbing in parts of the Sun Belt.

“We know that that is asking for trouble when you do that,” Dr Fauci said.

Trump’s rally came hours after the White House said he had tested negative for Covid-19 on consecutive days and was not infectious to others.

They were the president’s first negative Covid-19 tests announced by the White House since Trump said on October 2 that he contracted the virus.

In a memo, Dr Sean Conley did not say when the tests were conducted but that they and other clinical and laboratory data “indicate a lack of detectable viral replication.”