Trump Is Really Cross About A Trip To The Hairdresser. Here's Why - Rugby and Daventry Radio Station Midlands UK

A scandal involving long-time Trump rival Nancy Pelosi and a hair dresser’s escalated on Thursday as Donald Trump seized on her visit to score political points.

The squabble over the top Democrat’s hair appointment in San Francisco, where she lives when she’s not in Washington, began unfolding on Tuesday after Fox News published security camera footage showing her walking across the salon with her mask hanging around her neck.

The problem? San Francisco has not yet allowed salons to reopen indoors, and anyone entering any business in the city now is required to wear a mask to slow the spread of Covid-19.

Pelosi said on Wednesday that the footage doesn’t tell the whole story and implied she wasn’t aware of the city’s salon rules. “I take responsibility for trusting the word of the neighbourhood salon that I’ve been to over the years many times, and when they said, ‘We’re able to accommodate people, one person at a time,’ I trusted that,” she told reporters at an event in San Francisco.

As for wearing a mask, behaviour she strongly advocates and models in public, she said her mask was off in the footage only because she had just had her hair washed. “Do you wear a mask when you’re washing your hair?” Pelosi asked reporters when challenged on it. According to California’s salon rules, people must. Though it’s worth noting the US Centers for Disease Control and Prevention says masks are ineffective when they get wet. 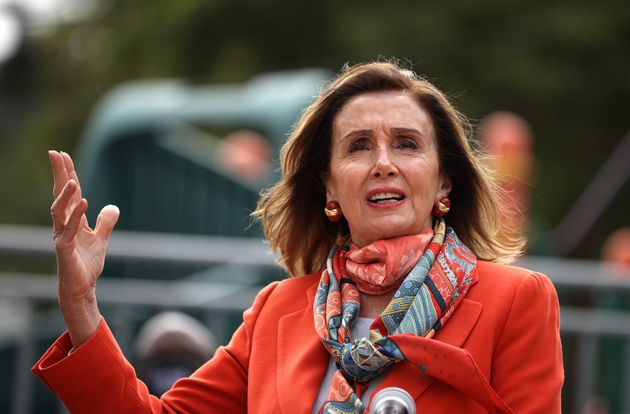 “I think that this salon owes me an apology for setting me up,” Pelosi said.

Jonathan DeNardo, the stylist who did Pelosi’s hair, says the salon owner gave him permission two days ahead of time for Pelosi to come in, but then the owner sent the footage to Fox News. A lawyer for DeNardo also says the owner “made several vitriolic and incendiary comments about Speaker Pelosi,” suggesting the disclosure of the video was politically motivated.

Trump cheered on the scandal, tweeting on Wednesday that Pelosi went to a salon “despite constantly lecturing everyone else.” He’s since tweeted three more times about it, asking Thursday is anyone wants “a Speaker of the House who can be so easily SET UP?”

White House press secretary Kayleigh McEnany opened her briefing on Thursday with a recap of the incident, flanked by two TVs playing the salon security footage on a loop.

“Apparently, the rules do not apply to Speaker Nancy Pelosi. She wants small businesses to stay shut down but only reopened for her convenience,” she said. “Do as I say, not as I do, says Nancy Pelosi.”

As opposed to Trump, Pelosi has advocated for a more gradual, science-based reopening schedule across the country, and though it’s hard to believe she wouldn’t know the rules in San Francisco, she had nothing to do with establishing them. Under Trump’s leadership, all Covid-19 guidance has been left up to states and local governments.

“We have our speaker working day and night against the challenges we have at the White House,” Breed said. “It’s unfortunate this conversation has blown up in the way it has and distracted us from the real issue.”

The salon owner, Erica Kious of eSalonSF, appeared on Fox News after the story first broke, telling host Tucker Carlson on Wednesday that she wasn’t trying to embarrass Pelosi.

“She had called the stylist … the appointment was already booked, so there’s no way I could have set that up,” she said, though she didn’t refute the stylist’s claim that she gave him permission to have Pelosi come in.

“It’s the fact that she actually came in and didn’t have a mask on, and I just thought, you know, my staff and people haven’t been able to work and make money and provide for their families, and if she’s in there comfortably without a mask and feeling safe, then why are we shut down? Why am I not able to have clients come in?”

Kious says she’s since been inundated with hateful text messages, bad Yelp reviews, death threats and threats to burn down her salon. She now doesn’t plan to reopen her business in San Francisco. A GoFundMe for her had raised more than £65,000 as of Thursday evening.

Rugby and Daventry Radio Station Midlands UK > News > National And International News > Huffpost > Trump Is Really Cross About A Trip To The Hairdresser. Here’s Why