“I looked, and I studied, and you are very eminently qualified for this job,” Trump told Barrett as he made the announcement. “You are going to be fantastic.”

Barrett, a 48-year-old judge on the 7th US Circuit Court of Appeals, follows an extreme brand of conservatism that makes her a particularly polarising choice.

Speaking from the White House Rose Garden, Trump praised Barrett’s credentials, which included a clerkship with the late Justice Antonin Scalia, and noted that her confirmation would make her the first mother of school-aged children ever to serve on the Supreme Court.

“This should be a straightforward and prompt confirmation. Good luck,” Trump said. “I’m sure it will be very quick.”

Barrett said she was ”truly humbled” by the nomination and pledged to ”be mindful of who came before me” if confirmed. Ginsburg, Barrett said, led a “great American life” in which she “won the admiration of women across the country and, indeed, all over the world.”

Ginsburg’s final request was that her seat is filled by the winner of the November 3 election ― a request Trump falsely portrayed as made up by Democrats.

Polling shows that a majority of Americans side with Ginsburg, believing that the vacancy should be filled after the election.

Barrett and her would-be predecessor share few similarities. Trump’s pick is widely viewed as a threat to abortion rights and the Affordable Care Act, based on past comments and details about her personal life.

In 2016, Barrett indicated during a talk at Jacksonville University that the Supreme Court could still make it easier for states to restrict access to abortion, particularly late-term procedures. In 2017, she argued in a law review article that the Affordable Care Act went against a textual interpretation of the Constitution.

Democratic presidential nominee Joe Biden decried Barrett’s nomination based largely on her opposition to the Affordable Care Act. He urged the Senate in a statement to wait until after the election to fill the Supreme Court vacancy.

Senate minority leader Chuck Schumer of New York said that Barrett could “turn back the clock” not only on health care but also on women’s, LGBTQ and immigrants’ rights. 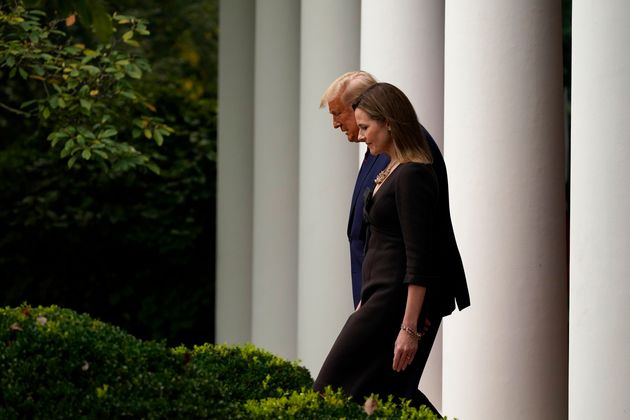 “President Trump and leader McConnell are doing what no Senate has done before: shamelessly rushing to fill Justice Ginsburg’s seat less than 40 days before a presidential election,” Schumer said.

She is also reported to be a member of a secretive Catholic group called People of Praise, whose members believe that, in marriage, husbands are decision-makers and should wield power over their wives. People of Praise also follows practices drawn from evangelical Christianity, such as faith healing.

The group is based in South Bend, Indiana, where Barrett lives with her husband and seven children. Critics worried that its ideology may influence Barrett’s decisions, a perspective conservatives regard as anti-Catholic bigotry.

Barrett gave a 2006 commencement speech at Notre Dame Law School in which she said that lawyers should view their work through the lens of religion. She expressed the hope that each graduate would “fulfill the promise of being a different kind of lawyer.”

“And that is this: that you will always keep in mind that your legal career is but a means to an end, and as Father Jenkins told you this morning, that end is building the kingdom of God,” she said. “You know the same law, are charged with maintaining the same ethical standards and will be entering the same kinds of legal jobs as your peers across the country. But if you can keep in mind that your fundamental purpose in life is not to be a lawyer, but to know, love, and serve God, you truly will be a different kind of lawyer.”

In her 2017 confirmation hearing for the circuit court, however, Barrett assured senators that she would be capable of separating her personal views from her work as a judge.

“If you’re asking whether I take my faith seriously and I’m a faithful Catholic, I am,” she said at the time. “Although I would stress that my personal church affiliation or my religious belief would not bear in the discharge of my duties as a judge.”

Trump’s decision to press forward with the confirmation process so close to the election has triggered nationwide alarm. The Supreme Court may wind up adjudicating cases related to the outcome of the election, as it did in 2000.

Democrats are particularly angry that Republicans are proceeding with Barrett’s nomination even though they refused to move ahead with President Barack Obama’s nomination of Merrick Garland to replace Justice Antonin Scalia in 2016. At that time, Republicans cited a supposed tradition against filling a Supreme Court seat during an election year. 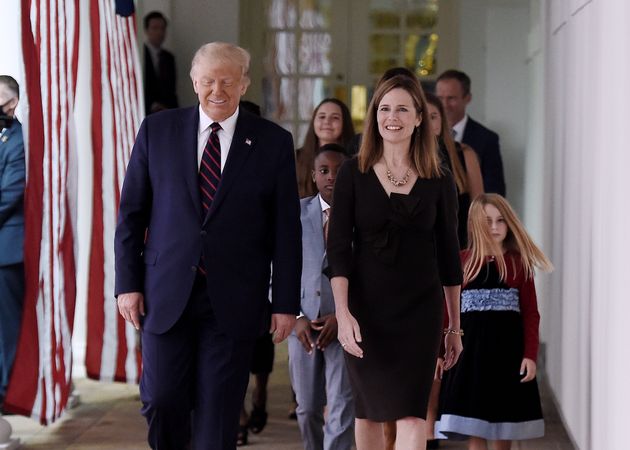 Senate majority leader Mitch McConnell also argued in 2016 that the results of the midterm elections, which favoured Republicans, proved that American voters were dissatisfied with incumbent leadership and should make “their voices heard” before a new judge was put on the bench.

In the last week, however, McConnell attempted to fend off accusations of hypocrisy by arguing that the situation now differs from 2016 because the White House and the Senate are now controlled by the same party. He has apparently remained silent on the results of the 2018 midterms, which favoured Democrats.

Few Senate Republicans have criticised Trump’s actions to fill Ginsburg’s seat on the Supreme Court. So far, only senators Lisa Murkowski of Alaska and Susan Collins of Maine have said the seat should be filled by the winner of the November 3 election.

Trump’s nomination now goes to the Senate, where it appears to have just enough votes to squeak by.

Confirmation hearings are slated to begin October 12, with just over three weeks for Barrett to be confirmed before Election Day.