Donald Trump claimed Monday that the coronavirus pandemic that has killed over 170,000 Americans is God’s way of testing him.

While boasting about the “economic miracle” he claims to have achieved before Covid-19 disrupted life across America, the president described having a conversation with God about his track record as president.

“We built the greatest economy in the history of the world, and now I have to do it again,” he said, repeating a debunkedclaim about his administration’s economic successes during a campaign stop in Mankato, Minnesota.

According to Trump, God wasn’t too pleased with his boast.

“[God] said, ‘That, you shouldn’t say. Now we’re going to have you do it again,’” he said as his audience broke into laughter. 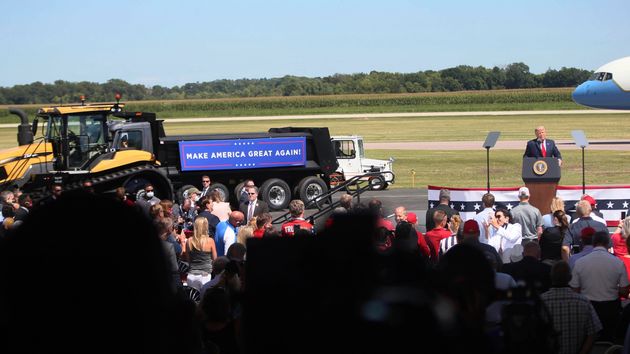 Many Christians in the US may be able to relate to the idea of such a conversation. About 90% of American Christians say that they talk to God and about 35% say that God talks back to them, according to the Pew Research Center. Among evangelicals, 45% say that their communication with God is a two-way street. It’s also not at all uncommon for religious people to believe that the suffering they are enduring is part of some kind of spiritual test.

But Trump’s assessment of the situation lacked spiritual maturity, according to Sister Simone Campbell, executive director of NETWORK Lobby for Catholic Social Justice.

Campbell pointed to the biblical story of Jesus praying before his crucifixion in the Garden of Gethsemane. Jesus prayed that God would take away the suffering he was about to endure but ultimately asked for God’s will to be done. A  mature reading of this story would involve understanding that suffering is often caused by human actions and that there’s a level of shared responsibility that comes into play, she said.

That’s the antithesis of what Trump is saying, Campbell said.

In addition, she said Trump doesn’t seem to understand that he’s had a role in causing the suffering that he’s talking about.

“It’s not like God is doing it to him, it’s the consequences of his choices,” she said. “He evidences no concern for the suffering of people. That makes it a very un-Christian statement, in my view.”

The US has the highest number of positive Covid-19 cases in the world by far, with over 5,430,000 people infected as of Monday, according to data from Johns Hopkins University.