The ads, which label Biden “Sleepy Joe,” show him gazing out against a dark background with his mouth slightly agape. The Trump campaign is also running near-identical Facebook ads featuring the same text along with the original, unedited photo of Biden, in which his skin looks much brighter and healthier.

It’s among the latest examples of Trump officials circulating imagery that has been deceptively altered or pulled out of context to attack Biden. 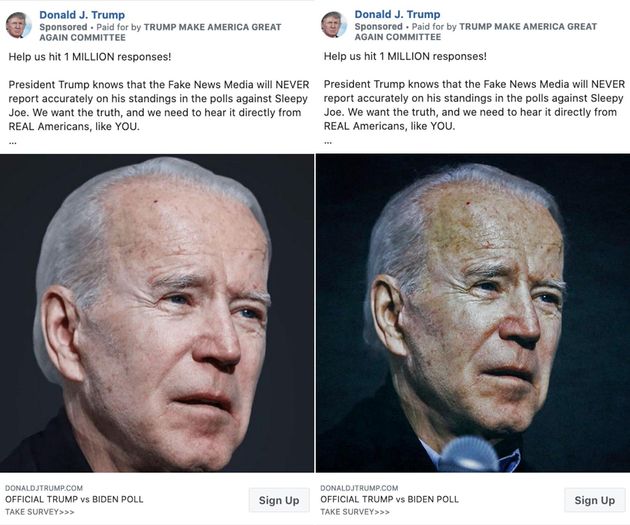 In the full quote, which the clip did not include, Biden said: “Trump and Pence are running on this, and I find it fascinating: Quote, ‘You won’t be safe in Joe Biden’s America.’ And what’s their proof? The violence we’re seeing in Donald Trump’s America.”

Trump, 74, who melted down on Twitter this week over rumours that he had suffered “a series of mini-strokes,” has spent months implying that Biden, 77, is senile and unfit to be president.

The Biden campaign didn’t immediately respond to a request for comment about the ads, which first appeared on Facebook in August. The Trump campaign told HuffPost that it applied a filter to the photo of Biden and declined to answer why.

As a policy, Facebook does not fact-check political ads, giving politicians a green light to spread false and misleading information to millions of people in the midst of an election cycle. Trump’s team has paid Facebook to run numerous ads containing claims that are demonstrably false, including that Biden wants to “defund” police forces.

Biden’s campaign, on the other hand, “has not taken similar advantage of Facebook’s leniency about political claims,” according to an analysis by The Washington Post.

Facebook announced Thursday that it would ban new political ads from running in the week before the November vote.

Why Chadwick Boseman Kept His Cancer Battle A Secret, According To His Agent