Stars including Olly Murs, Liam Payne and Rylan Clark-Neal have rushed to support Tom Parker, after he revealed he has been diagnosed with an inoperable brain tumour.

The former Wanted singer opened up about his diagnosis in an interview with his wife Kelsey in OK magazine on Monday.

Tom told of how he was diagnosed with stage four glioblastoma in August after being taken to hospital following a seizure during a family break.

After the 32 year old also posted about his condition on Instagram, he received a number of supportive messages from names across the entertainment industry.

Hey guys, you know that we’ve both been quiet on social media for a few weeks and it’s time to tell you why. There’s no easy way to say this but I’ve sadly been diagnosed with a Brain Tumour and I’m already undergoing treatment. We decided, after a lot of thought, that rather than hiding away and trying to keep it a secret, we would do one interview where we could lay out all the details and let everyone know the facts in our own way. We are all absolutely devastated but we are gonna fight this all the way. We don’t want your sadness, we just want love and positivity and together we will raise awareness of this terrible disease and look for all available treatment options. It’s gonna be a tough battle but with everyone’s love and support we are going to beat this. Tom and Kelsey xxx @ok_mag

TOWIE’s James ‘Arg Argent’ wrote: “We love you Tom! We got this brother, No doubt about it!”

His co-star Vas J Morgan sent a single heart emoji, while Charlie King added: “Sending every positive, strong , healing vibe possible !! You can and will beat this.”

On Twitter, Olly Murs tweeted Tom’s OK magazine interview, adding: “Really hard to read this, stay strong Tom. Sending my love to you and your family.”

Really hard to read this, stay strong Tom. Sending my love to you and your family 😪❤️ https://t.co/DHw1ifHlUI

In his own Instagram post, Tom explained he and Kelsey had decided to speak about his diagnosis to “lay out all the details and let everyone know the facts in our own way”.

“We are all absolutely devastated but we are gonna fight this all the way,” he said. “We don’t want your sadness, we just want love and positivity and together we will raise awareness of this terrible disease and look for all available treatment options.

“It’s gonna be a tough battle but with everyone’s love and support we are going to beat this.” 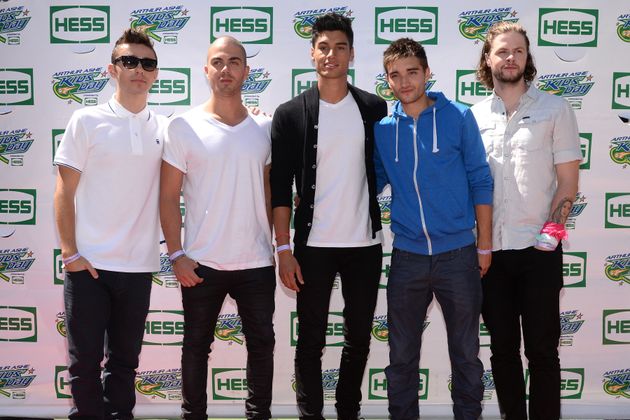 Tom’s wife Kelsey is currently 36 weeks pregnant with their second child and was unable to be with him in hospital when he received his diagnosis in August.

She told OK magazine: “It was horrendous. They rang me and told me over the phone. They said, ‘It’s a tumour and it’s worst-case scenario’.

“They also told us it was inoperable and what the treatment would be. I was in a complete state.

“It was like everything stopped. Obviously being told you have any tumour is bad, but to be told you have the worst one is a lot to take in. All I could think was, ‘What’s going to happen and what is our life now?’”

Tom has declined to know his prognosis, and is currently undergoing back-to-back chemotherapy and radiotherapy treatment for six weeks, with the weekends off.

In the interview, the couple, who are also parents to 15-month-old daughter Aurelia, also told of the support Tom’s former The Wanted bandmates have offered.

He said: “Obviously all the boys were as shocked as we were. They are gutted by the news, but they’ve been incredibly supportive.

“Jay [McGuiness] has been round to see us a few times since we got the news and is reading up on everything he can and Max [George] was here last week.

“Siva [Kaneswaran] and Nathan [Sykes] obviously live a lot further away, but all four of the boys have been texting regularly and sending through different articles and possible treatments and therapies that they’re all reading about.”

The full interview with Tom and Kelsey appears in this week’s OK magazine. 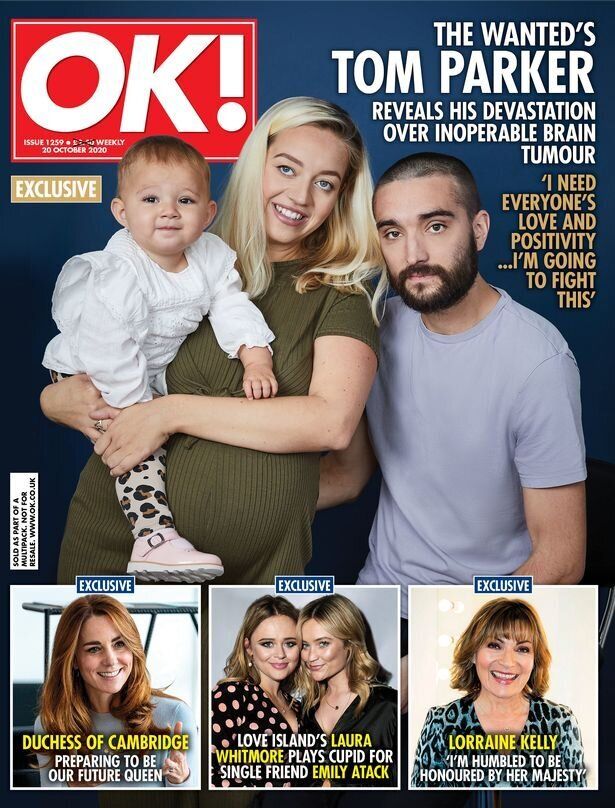