Boris Johnson on Tuesday apologised and said he “misspoke” after struggling to explain his own new Covid-19 restrictions imposed on the north-east of England.

But it’s not the first time the PM and his ministerial colleagues have given mixed and even contradictory messages on how to deal with coronavirus.

The PM was forced to apologise as the government’s handling of local lockdown measures in north-east England descended into farce.

The prime minister stumbled over his explanation of the ban on households mixing, which is due to come into legal effect on Wednesday – just hours after another member of his government was unable to say whether the prohibition extended to pub beer gardens.

Johnson said he “misspoke” but the confusion comes as the government is under pressure from Tory rebels to give MPs a greater role in scrutinising and voting on new measures before they are implemented.

The new regulations in Northumberland, Newcastle, Gateshead, North and South Tyneside, Sunderland and County Durham will see fines imposed if people mix with others from outside their household or bubble in indoor settings, including pubs and restaurants.

But with the rules yet to be published in full, ministers faced questions about whether they would apply in settings such as beer gardens.

Johnson said in response to questions: “In the North East and other areas where extra-tight measures have been brought in, you should follow the guidance of local authorities but it is six in a home, six in hospitality but, as I understand it, not six outside.”

But he later tweeted: “Apologies, I misspoke today. In the North East, new rules mean you cannot meet people from different households in social settings indoors, including in pubs, restaurants and your home. You should also avoid socialising with other households outside.”

Earlier in the day, a government minister was unable to clarify whether new restrictions banning households in swathes of the north-east of England from meeting indoors applied to pub and restaurant gardens.

Gillian Keegan said she did not fully understand the new rules, some 15 hours before they were to be imposed on Wednesday.

Pressed on how people are meant to keep up to date with the latest restrictions when ministers cannot, she said: “I’m sorry I can’t answer that question. I’m sure there are many people who could. I don’t represent the north east.” 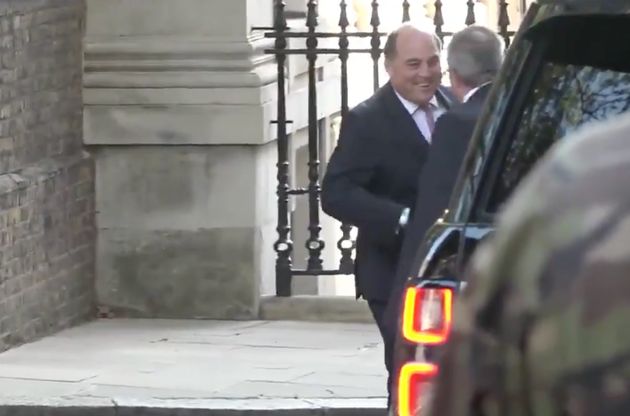 Defence secretary Ben Wallace was forced to apologise for breaking social distancing rules, after he was filmed shaking hands with someone earlier this month.

Footage of the handshake on Tuesday morning was captured by Sky News as MPs returned to Westminster for the new term of parliament.

Johnson’s spokesperson said: “The defence secretary recognises the mistake and apologises for slipping up.

“He knows the importance of social distancing and will be extra careful in future.”

In April Wallace revealed he had spent time self-isolating after developing coronavirus symptoms.

In June, health secretary Matt Hancock was filmed slapping a colleague on the back in the Commons chamber.

Hancock, who suffered from coronavirus symptoms in March, later said he was “so sorry for a human mistake on my part”.

“Like all of us, I instinctively wanted to reach out to a friend I’d just seen – in this case, for the first time in many weeks. I realised my mistake and corrected myself,” the health secretary said.

He said it shows how hard social distancing can be, but added it is “so important that we all keep trying to do our bit”.

In a clip which quickly garnered thousands of views after it was posted on Twitter, the health secretary can be seen putting his arm across a colleague’s shoulder as he enters the Commons.

A third MP then comes and stands beside both of them, before the man in the middle steps back.

Hancock then steps across to fill the gap to speak to the third MP, before moving back again. 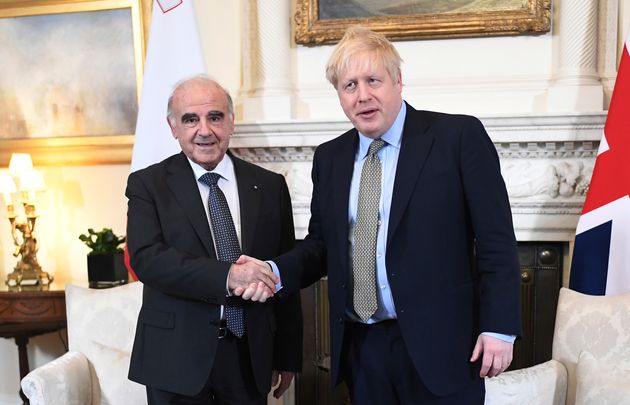 The prime minister infamously boasted on March 3 of having shaken hands “with everybody” he met in a hospital which had a confirmed coronavirus case.

On the same day the government’s Scientific Advisory Group for Emergencies (Sage) body had told ministers they should “advise against greetings such as shaking hands” in an effort to curb the spread of the illness.

Johnson later developed coronavirus symptoms and was taken to intensive care in a London hospital.

The prime minister made a point of shaking hands with Phillip Schofield, even though the presenter kept his hands to his sides when he interviewed him on ITV’s This Morning.

He was then photographed on March 9 shaking hands with the boxer Anthony Joshua at the Commonwealth Day service at Westminster Abbey.

The prime minister’s official spokesman said that Johnson would not have been aware at the time of the SPI-B paper, which did not at that point represent the considered view of Sage.

Johnson told reporters at a press conference in Downing Street: “I am shaking hands. I was at a hospital the other night where I think there were coronavirus patients and I was shaking hands with everybody, you will be pleased to know, and I continue to shake hands.

“People must make up their own minds but I think the scientific evidence is … our judgment is that washing your hands is the crucial thing.”

In July, Downing Street contradicted Hancock on whether face coverings will be compulsory in sandwich shops after he defended Cabinet colleague Michael Gove’s maskless purchase in Pret A Manger.

The health secretary said coverings would need to be worn in shops when the law is enforced to tackle the coronavirus spread in England from July 24.

But No 10 later said there would be an exemption for takeaway purchases.

The contradiction came after senior Cabinet Office minister Gove, who had earlier sparked confusion by suggesting face coverings would not be compulsory, was photographed uncovered in Pret A Manger despite insisting it was “basic good manners” to wear a mask.

It was in stark contrast to International Development Secretary Liz Truss, who minutes earlier had left the same shop in Westminster wearing a blue covering.

Questioned over who was correct, Hancock told Sky News: “You do need to wear a face mask in Pret because Pret is a shop.

“If there’s table service, it is not necessary to have a mask. But in any shop, you do need a mask. So, if you’re going up to the counter in Pret to buy takeaway that is a shop … but if you go to your local pub you can’t go to the bar.”

Not sure why people are confused

“We will be publishing the full guidance shortly but my understanding is that it wouldn’t be mandatory if you went in, for example, to a sandwich shop in order to get a takeaway to wear a face covering,” he said.

“It is mandatory … we are talking about supermarkets and other shops rather than food shops.”

Hancock had defended Gove by saying that the photographs were taken “before I announced the change in policy to the House of Commons” on Tuesday afternoon.

However, the pictures were taken on Tuesday morning, after the policy was announced in a press release to journalists.

Chancellor Rishi Sunak, who was previously criticised for not wearing a face covering during a visit to Wagamama, later came down on the side of wearing masks in Pret when he posted an image of himself during a well-covered visit to the sandwich chain.

Dominic Cummings broke the coronavirus lockdown rules when he visited Barnard Castle with his wife and son to test his “eyesight”.

Boris Johnson’s top adviser was under intense pressure from Tory MPs to quit after it was revealed he travelled to Durham from London in March.

During his time in the north of England Cummings also drove to the town of Barnard Castle.

He claimed he took the trip to see if he was fit enough to drive before returning to London for work.

During an extraordinary briefing in Downing Street, he said he “acted reasonably” by driving to Durham during lockdown, and had no regrets.

A string of Tory MPs called on the PM to sack his adviser, after they were inundated with complaints from the public who have been obeying the ‘stay at home’ regulations stringently.

But Cummings attempted to bat down criticism of his actions on Monday, telling reporters “I have not offered to resign,” adding: “I have not considered it.”

He denied breaking the rules or the spirit of the rules.