We’re in the middle of surge in Covid-19 cases

You have probably already heard that we are in the middle of a surge in Covid-19 cases.

After a huge upturn in coronavirus cases that peaked across April and the start of May – with 6,201 new cases reported on May 1 alone – the UK saw a dramatic decline in infections over the summer.

Throughout June and July cases dropped, with just 352 cases reported on July 6 – the lowest recorded since lockdown began on March 23.

But since the start of August, cases have been on the rise.

On August 9, more than 1,000 new coronavirus infections were reported by the government for the first time since June 26. Daily cases breached the 1,000 mark 18 more times during the month. 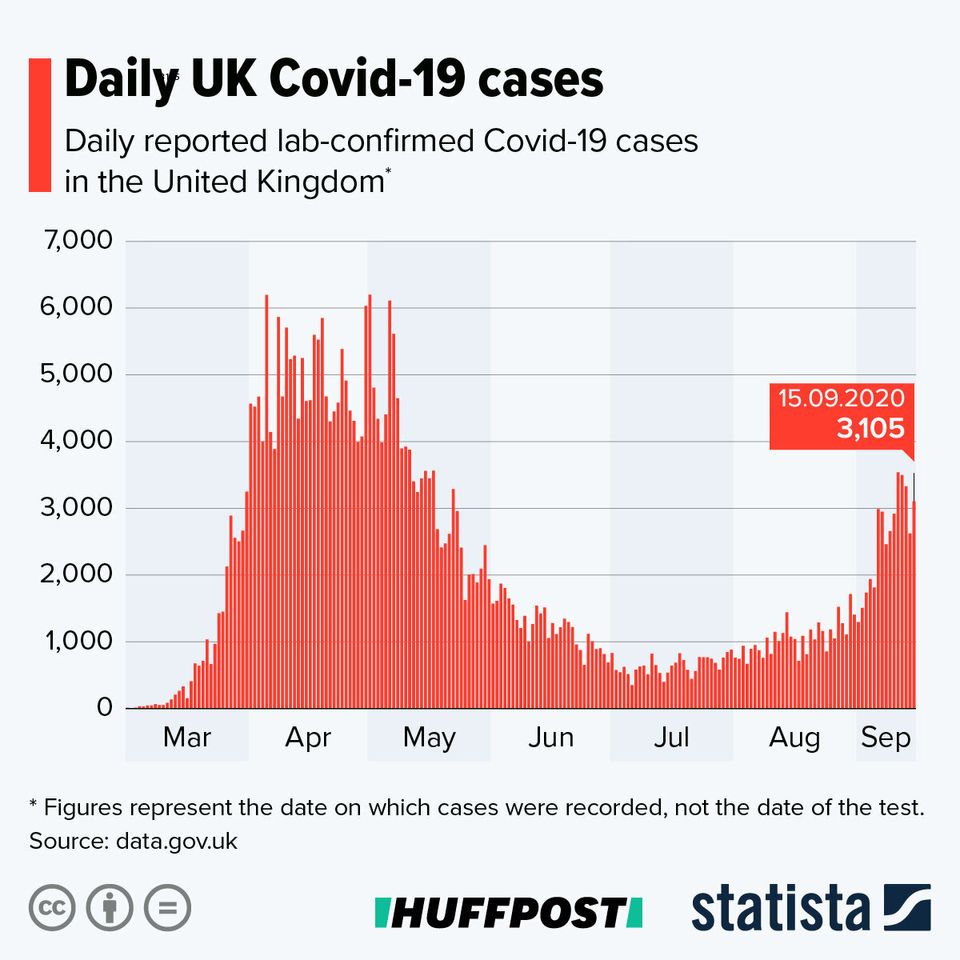 But it was on September 6 that the UK received a sharp reminder that the pandemic had not gone away over summer, with 2,988 new Covid-19 cases reported.

It was the highest figure recorded in more than three months – and was followed by similar numbers in the following days.

As a result of these rising figure, the government has implemented strict new rules on meeting with people outside of your own household or bubble.

On Monday, it became illegal in England to meet with more than five other people outside of your household. 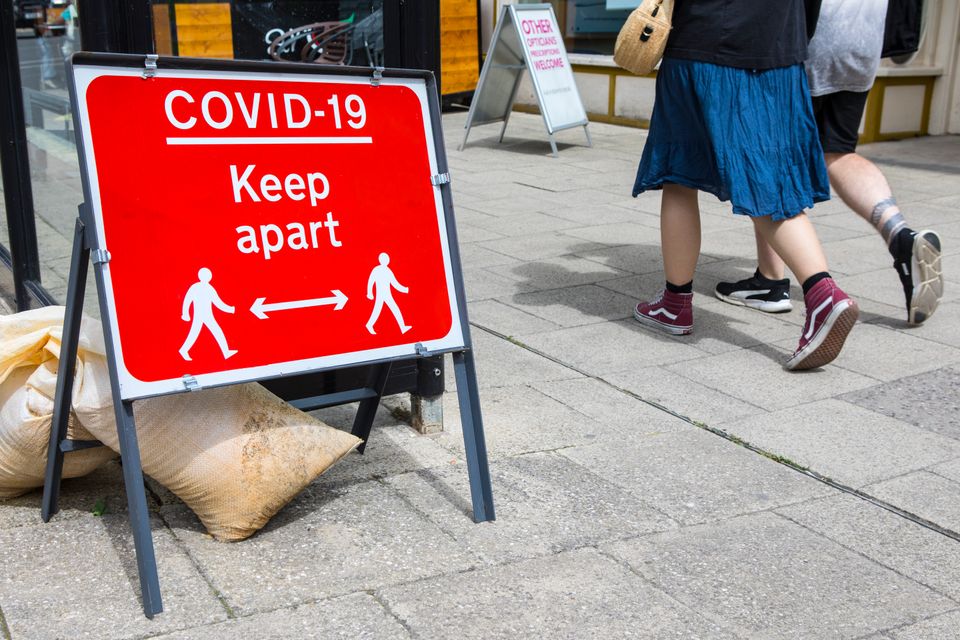 However, it’s not just the rise in the number of people testing positive for Covid-19 each day that suggests the spread of coronavirus infections is getting worse.

On Friday, a study by Imperial College London warned that the R rate – the reproduction rate of the virus – could be as high as 1.7 in the UK.

That would mean that every 10 people with Covid-19 would be infecting 17 people – something scientists have branded “concerning”.

The government’s own calculations, however, suggest the R rate is between 1.0 and 1.2, up from between 0.7 and 1.0 when ministers first published the figures in May.

Meanwhile, the latest data also suggests the growth rate of the virus is between -1% and +3%, meaning the number of new infections each day is somewhere between shrinking by 1% and growing by 3%.

These are the coronavirus hotspots in England right now 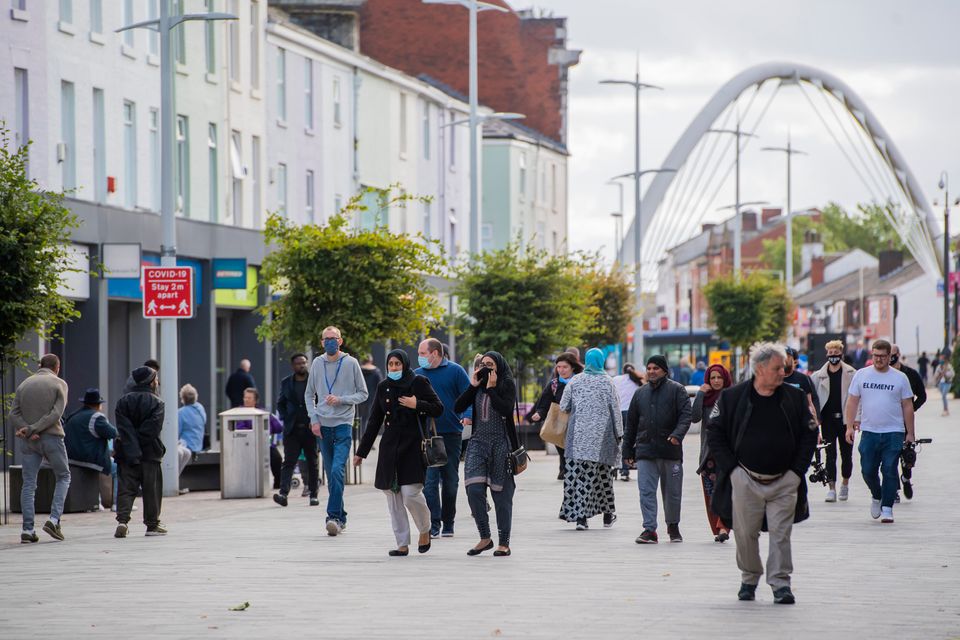 On Sunday, new analysis of government figures revealed that Bolton – which is already under strict lockdown measures – had the highest rate of coronavirus in England.

Public Health England figures show the town recorded 552 new Covid-19 cases in the seven days to September 10 – the equivalent of 192 cases per 100,000 people.

For context, the government usually adds foreign countries to its quarantine list when the rate reaches 20 per 100,000.

But Bolton is not alone – four other areas in England also had rates above 100 cases per 100,000 people.

Blackburn with Darwen, Hydburn, Oadby and Wigston and Preston all made the list.

Areas of England with the highest rates of Covid-19

In total, 210 of the 315 local authority areas in England recorded an increase in the weekly rate of new Covid-19 cases in the seven days to September 10.

The rate fell in 91 areas and was unchanged in 14 areas.

New cases were recorded in all 315 local authority areas.

Despite a spike in cases, coronavirus deaths remain low 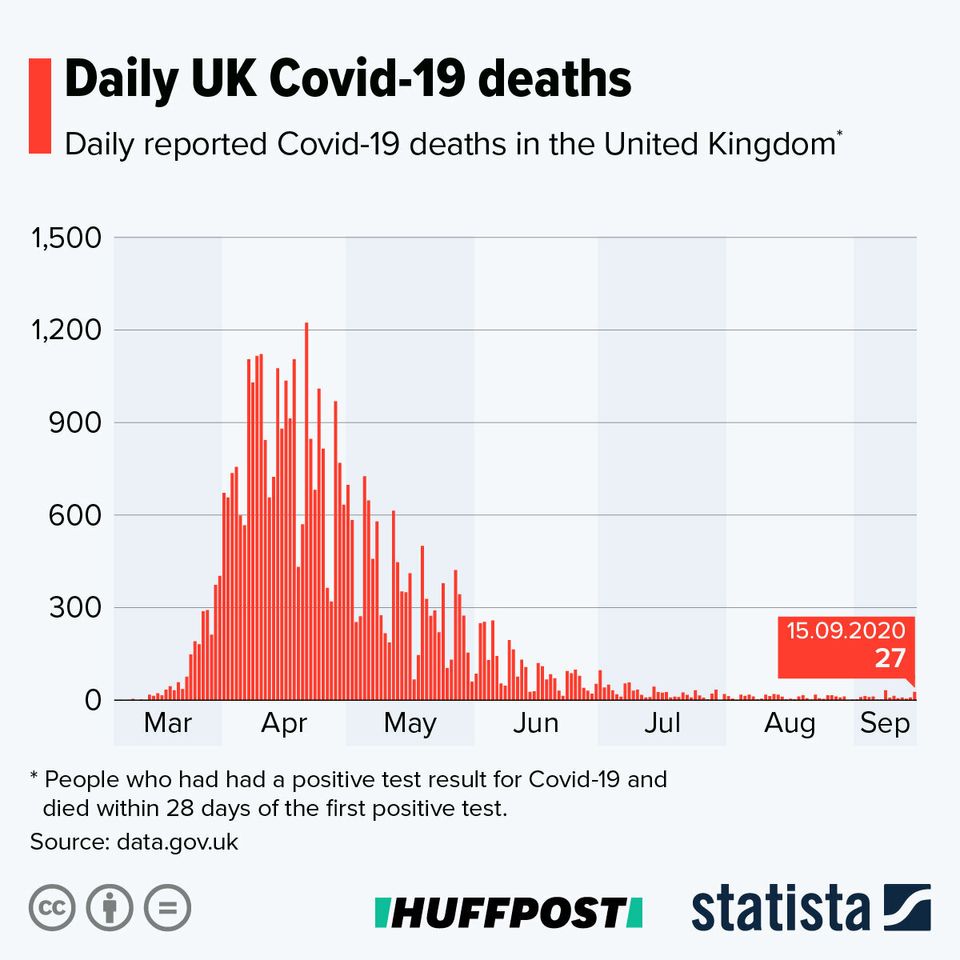 On March 6, the UK’s first coronavirus death was confirmed by the government.

Since then, another 41,663 people have died, leaving the UK with fifth highest Covid-19 death toll in the world.

Like cases, deaths from the virus peaked in April and May, with more than 1,000 deaths reported on some days.

But it was on April 21 that the coronavirus pandemic truly spiked, with the deaths of 1,224 people reported in a single day – the highest figure at any time throughout the crisis.

Between the end of April and the start of July, deaths from Covid-19 dropped dramatically.

On July 30, for the first time since March 11, the UK did not report a single death from the virus.

Since then, deaths have remained low – despite the recent spike in cases. However, scientists have warned that this could change.

Jasmina Panovska-Griffiths, a senior mathematical modeller from the UCL Institute of Epidemiology and Health Care, told HuffPost UK: “There is a danger that the number of hospitalisations and deaths may be lagging behind [the recent spike in cases] and we just don’t know at the moment.

“This is the concerning factor – how is this going to develop over the next couple of days, weeks and months?” 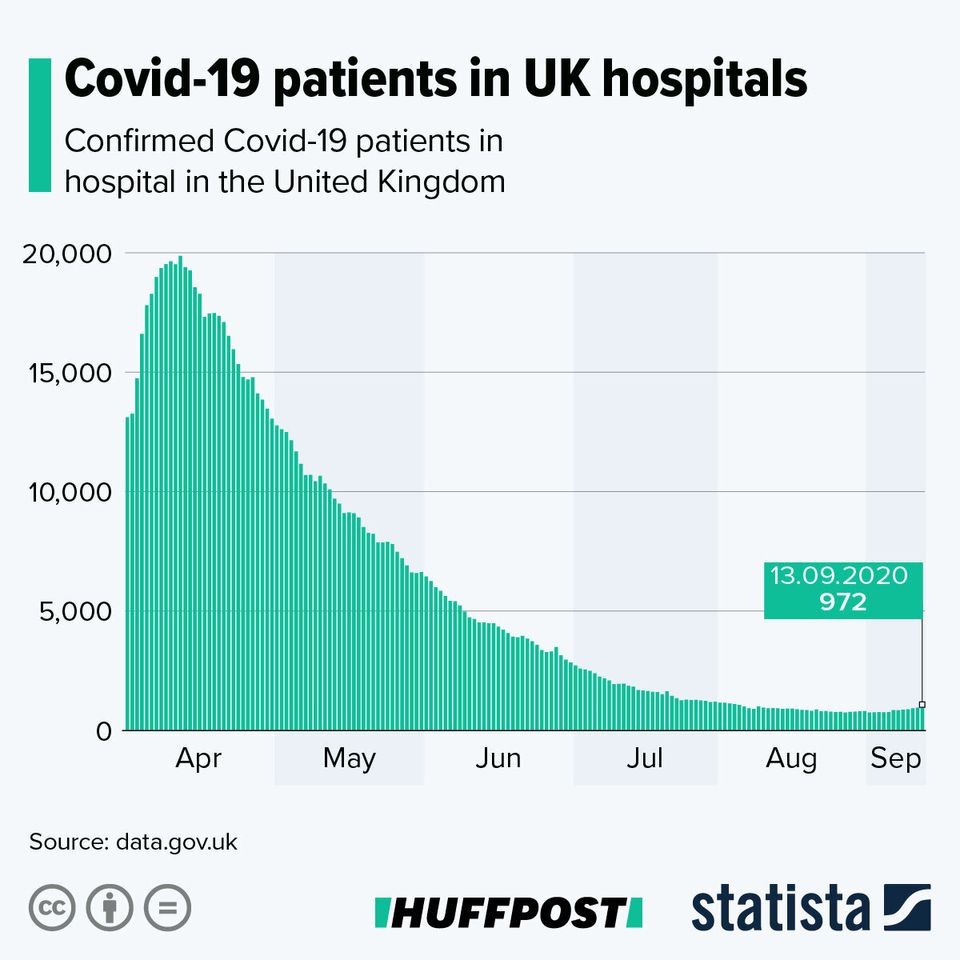 The picture in the UK’s hospitals now is drastically different to how it was at the peak of the coronavirus crisis.

However, while there has undoubtedly been a massive drop in the number of Covid-19 patients in hospital since the height of the pandemic, government data suggests the number of people hospitalised with the virus is on the rise once again.

Since August 11, there have been fewer than 1,000 coronavirus patients in hospitals across the UK, reaching a pandemic-low of 756 on August 28.

But the start of September brought a creeping rise in hospitalisations.

There have been more than 800 people in hospital with Covid-19 since September 7, rising to 972 on September 13 – the highest number seen since mid-August.

The number of people on ventilators remains low 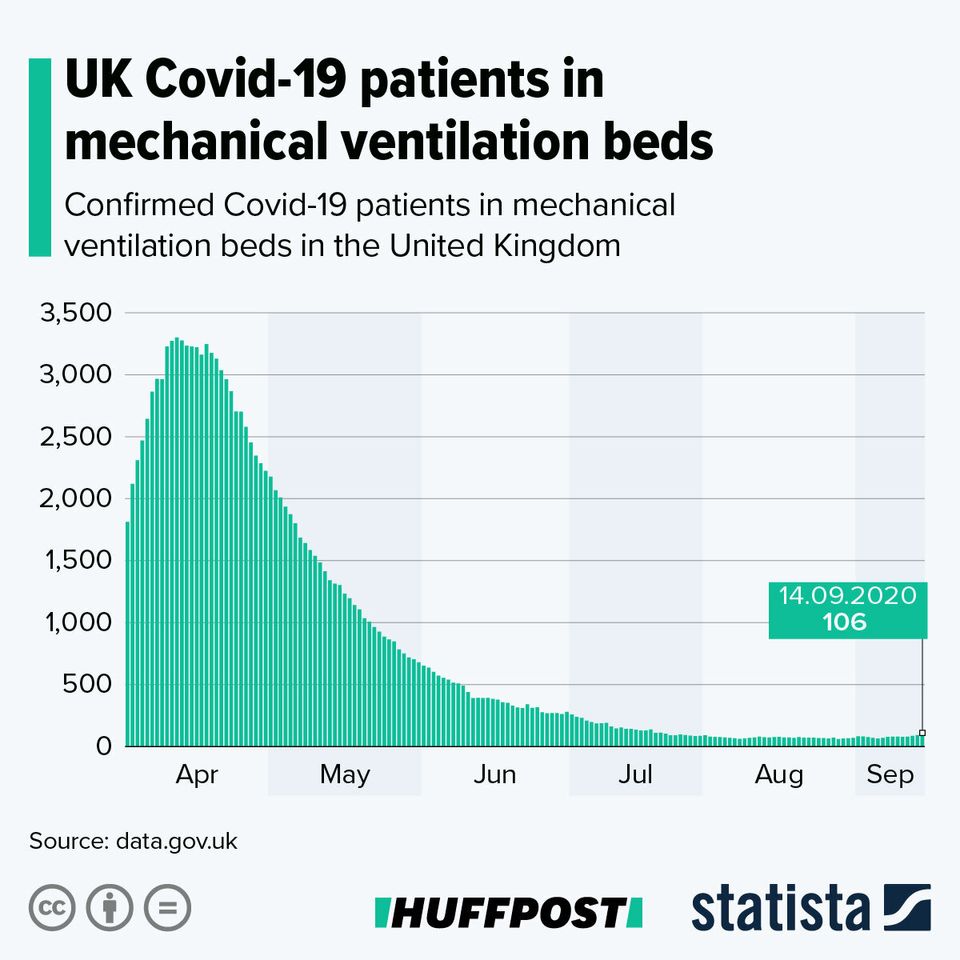 Like the total number of coronavirus patients in hospital, the number of people with the virus needing mechanical ventilation has also fallen drastically.

On April 12, there were 3,301 people with Covid-19 on ventilators in hospitals in the UK – the highest at any point during the pandemic so far.

Since then, there has been a huge drop in the number of people needing this kind of support breathing, with the figure dropping down into the double digits by the end of July.

However, there are some indications that could be very slowly changing direction.

On September 14, there were 106 people in mechanical ventilation beds in the UK – the first time the number had risen above 100 since July 24.

What is going on with testing? 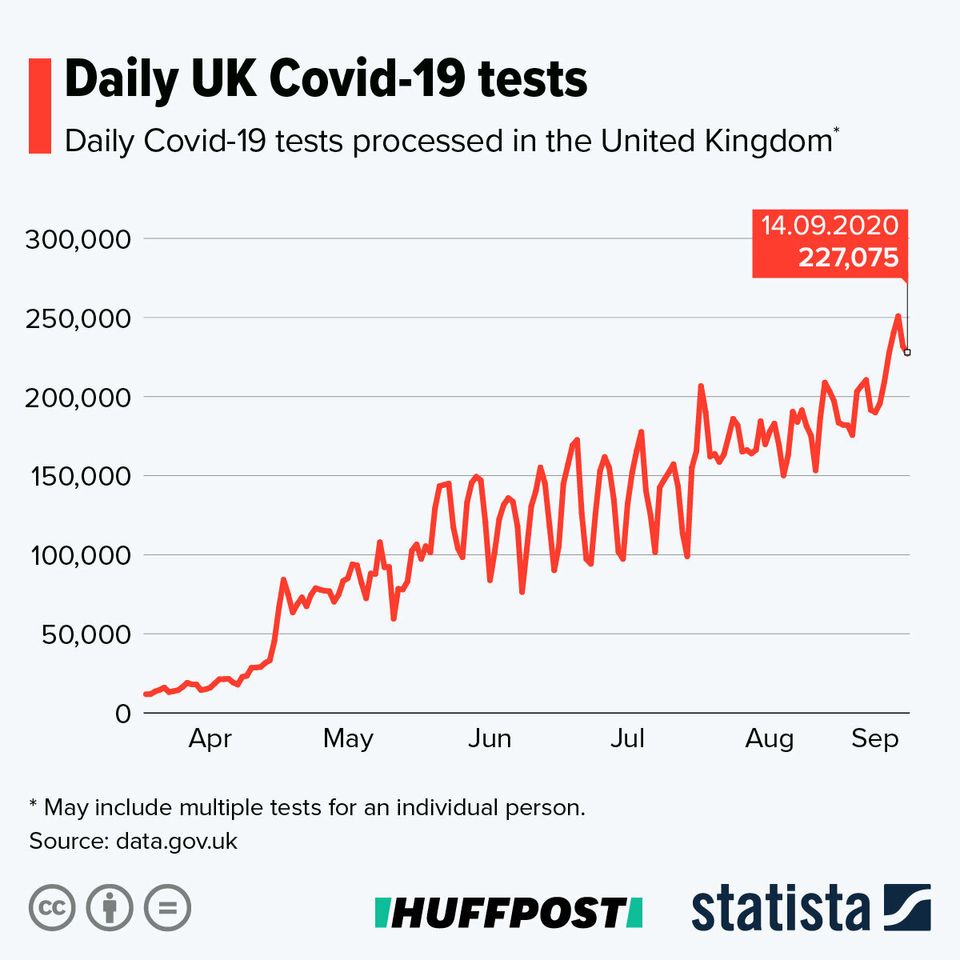 It’s important to remember as the pandemic has gone on, the UK’s coronavirus testing capacity has increased.

With Covid-19 tests reserved for key workers at the start of the crisis, its likely that there were many more people with coronavirus in March, April and May than official figures would suggest.

According to government data, on September 10 the UK had the capacity to carry out almost 375,000 coronavirus tests – the highest ever.

Despite this, the testing system has been shrouded in chaos in recent weeks, with people – including sick children – told to travel hundreds of miles for a Covid-19 test.

HuffPost UK reported last week how testing centres have been turning away thousands of people, including key workers.

On Tuesday, health secretary Matt Hancock revealed that – while the government attempts to fix problems in the system – tests for coronavirus will be rationed.

Patients with acute medical needs and people in care homes will be at the front of the queue for Covid-19 checks under a new system, he explained.

How To (Try To) Get A Coronavirus Test Amid Shortages