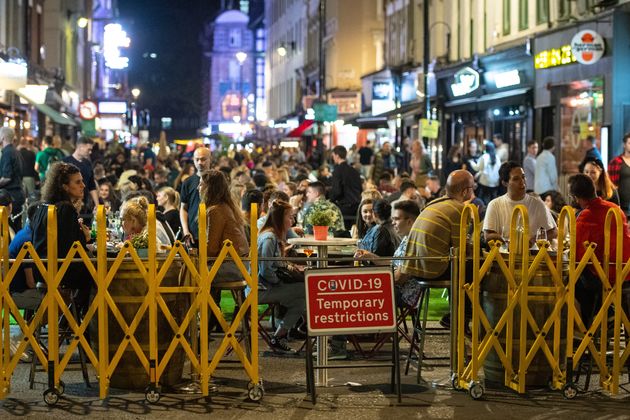 The detailed fine print of the government’s new coronavirus legislation was published just 30 minutes before it came into force on Monday.

Such was the rush, that one human rights barrister suggested in a tweet that they were “so embarrassed” that the time of publication was omitted entirely from the final document.

So, what do they say? Yes, I am here at 23:48 on a Sunday night doing this. Thanks @pritipatel, who for some reason has replaced Matt Hancock as the minister responsible for these new regs.

Usually the time they are made is there too but clearly they are so embarrassed… /2 pic.twitter.com/Uv8aSMdA0U

Despite being announced and broadly outlined last Wednesday, the so-called “rule of six” guidance does contain new details of what the public needs to do in order to ensure they are not acting illegally – including, an apparent ban on… mingling.

JUDGE: Does the Defendant have any previous convictions?

COUNSEL: Just the one, Your Honour. He was convicted in 2020 of *SQUINTS AT LAPTOP* mingling. https://t.co/O146HNyOih

One new phrase is “linked households”, which describes how two households can hang out without being raided by police.

(2) There is no limit on the number of adults or children which may be in the second household.

(3) The first and second households are “linked households” in relation to each other.

(4) The first and second households cease to be linked households if neither household satisfies the condition in the opening words of paragraph (1).

In short this means that an adult living on their own or with no other adults but any number of children under 18, can hang out with any other household regardless of how many people live there.

Which would appear to go against the spirit of the “rule of six” but oh well.

People face fines of up to £3,200 if they do not abide by the new measure, which applies to both indoor and outdoor settings and follows a rapid increase in the number of daily positive cases.

The new law comes amid concerns about an increase in cases in care homes and growing criticism of the NHS Test and Trace system.

Aside from limited exemptions including work and education, police will be able to disperse gatherings of more than six people and issue fines ranging from £100 to £3,200.

Deputy assistant commissioner Matt Twist, who leads the Metropolitan Police’s response to coronavirus, said officers will be deployed in every borough to patrol public spaces and respond swiftly to incidents where groups gather in large numbers.

“Where people just won’t listen, and are putting everyone at risk, we absolutely will take enforcement action,” he said.

Home Secretary Priti Patel said the recent rise in cases “makes it clear that more needs to be done to stop the spread of this disease”.

Piers Morgan To Those Who Complained About Diversity On BGT: ‘You’re The Problem’