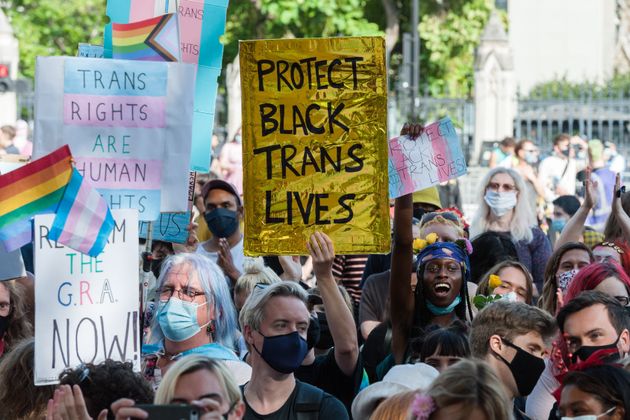 First things first, it should go without saying that the Gender Recognition Act is a mess.

The entire process is a cruel shambles, and no one should have to pour their heart out to a panel of strangers to be accepted legally as the gender they are.

It’s genuinely audacious that this happens, and yet, it will continue to happen following Tuesday’s semi-announcement.

At a time when non-binary and genderqueer identities are more visible and accepted in other auspices than ever in the UK, it’s a bit of an unfunny joke that the government didn’t take advantage of this key opportunity to ensure legal gender recognition for all of our siblings.

None of this is to say that any of the lacklustre, surface-levels proposed changes to the GRA go far enough.

But it would be a lie to say the glib complacency from government is in any way a surprise to those of us who’ve been campaigning on this for years.

What is a surprise is that we miraculously ended up in a position a thousand times better than what we were expecting from the government just a few months ago.

Against all odds, and an endless slew of denigration, we emerged a united front, refusing to allow our existing protections to be touched.

Mooted plans were about tightening the screw of exclusion of trans people from public life altogether, and of making things exponentially more difficult for trans young people to access healthcare.

But we came together, we fought this, and they listened, albeit partly. With the full weight of an institutionally transphobic British press against us and an uncaring government minded to swat away the justified concerns of trans people, we fought the law and… well, no one really won.

But all things considered, knowing what we do about the incredibly vocal anti-trans lobby and their ability to invade all discussion about trans lives, we came out not just to fight another day, but having stood with pride and in unison, we ever so slightly advanced something.

That is the monumental win I’m talking about – against all odds, and an endless slew of denigration, we emerged a united front, refusing to allow our existing protections to be touched.

Widespread social and legal progress are a bit “chicken and the egg”. Do stronger legal protections and basic recognition come first, or do we need a stronger framework of knowledge around gender diversity first?

People overwhelmingly want to make things less difficult for our communities, and are prepared to throw the weight of their institutions behind us when we need them to.

If the rigmarole that was the consultation and the cruelly protracted period while we waited for a response taught us anything, it’s that there are 20 people on trans people’s side for every one person insinuating we have big Stranger Danger energy when we try to exist in the public realm. Allow me this moment to force a silver lining out of every cloud, OK?

When the government runs a torturous consultation and the overwhelming majority of respondents are in favour of wide and positive change, you may expect to see that reflected in proposals.

In more normal times, that might be the case. But this is a government and press which appears to actively want to ride roughshod over trans people’s rights and interests in favour of propagating some imagined culture war we’re neither interested in nor prepared to fight.

We can’t afford to waste more time when the ground has completely shifted beneath our feet. We have bigger fish to fry and other things to campaign on for the genuine betterment of all trans people.

Despite years of very real torment and anguish foisted upon our communities, that we managed to eke out (minor) concessions and continue to plough ahead is testament to our strength and resilience.

As one of the few trans-led organisations working within the UK, we operate under a double-edged sword. We witness first-hand all the indignity transphobes and an uncaring government have to offer us, while taking flak from our trans comrades for not openly sharing their righteous fury.

Trust us when I say, we do share it, but we also know all too well the costs of giving out only crushing wave after wave of negativity and hopelessness.

I also believe we have to move on from the conversations around GRA: they open the door to too much toxic, one-sided debate, with too few asks that will result in meaningful improvements to trans people’s material conditions.

Frankly, no one could have anticipated the changes to the political structure of England and Wales since the consultation was originally launched: we can’t afford to waste more time when the ground has completely shifted beneath our feet. We have bigger fish to fry and other things to campaign on for the genuine betterment of all trans people.

We’re all tired. But we know what we have to fight for and where we have to shift our collective energies: informed consent in healthcare, and a continued, wider unpacking of the systems which force discrimination, hate, and misinformation against our trans communities.

Together, we plough on. Solidarity.