Can someone please show Batman how to see his Twitter mentions?

Although the first footage from director Matt Reeves’ The Batman premiered just days ago at DC FanDome, Twitter users have already cracked one of the teaser’s mysteries: the Riddler’s cryptic message to the caped crusader (played by an oh-so-emo-looking Robert Pattinson).

In the trailer, Riddler (Paul Dano) leaves a note addressed to Batman at a murder scene.

The message apparently asks, “What does a liar do when he’s dead?” and includes some puzzling symbols to decode like a game on the back of your cereal box. 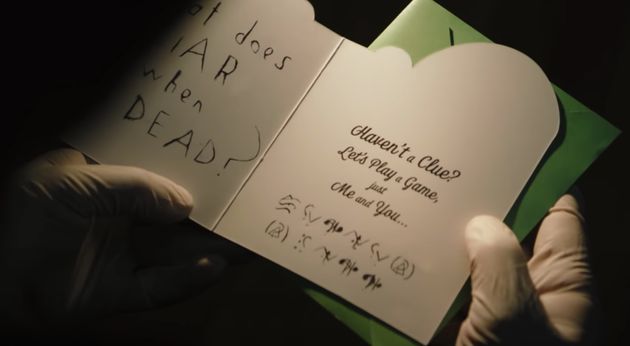 And it did not take long at all for two Twitter users, Andrew Lane and game designer Mike Selinker, to seemingly crack the code arriving at the same answer.

So, what does a liar do when he’s dead? “He lies still”, apparently.

So hyped for Matt Reeve’s Batman Movie, I decided to solve The Riddler’s code. #TheBatmanpic.twitter.com/vsxVxucedv

Lane first wrongly supposed that the word Batman would appear in the message before focusing on replacing repeating symbols with commonly used letters.

Selinker, on the other hand, first assigned numerical values to the symbols and then methodically went through the possibilities.

Check out the Twitter thread for future puzzle-solving tips:

In the new #TheBatmanTrailer, the Riddler leaves a card with the question “What does a liar do when he’s dead?” I could just solve it like a riddle (and did), but it’s a good opportunity to show how to solve a puzzle by brute force, so you’re sure of the answer. Here goes. (1/12) pic.twitter.com/sHveBmU2Pt

As Polygon points out, Reddit users were also quick to solve the puzzle, so as long as Batman has solid internet access, crime doesn’t stand a chance.

Fans were also given a first look at a completely unrecognisable Colin Farrell in character as The Penguin in the teaser, which also included a very surprising cameo from a certain former UK soap star.

The Batman is currently slated for cinema release in October 2021.