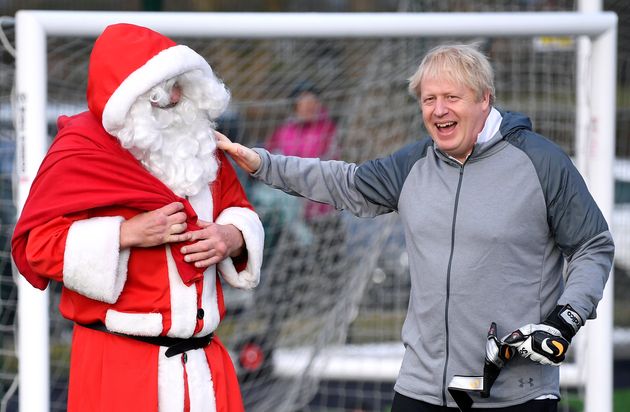 Will coronavirus be the Grinch that stole Christmas? It’s one of the many questions on everyone’s lips, following the new Covid-19 restrictions.

On Tuesday, the government confirmed that gatherings of more than six people will be illegal across England from Monday September 14 – with a few exemptions, such as events for work or education, some sporting events, and guest-limited weddings and funerals.

In Wednesday’s Downing Street briefing, Boris Johnson was asked directly if these restrictions mean Christmas has been cancelled. “I’m still hopeful, as I’ve said before, that in many ways we could be able to get some aspects of our lives back to normal by Christmas,” he said.

Yet chief medical officer Professor Chris Whitty said the latest restrictions will be here for a while. “In terms of the existing restrictions, people should see this as the next block of time,” he said. “That may not last many months, but it is very unlikely to  be over  in just two or three weeks.” Government insiders have also told HuffPost UK restrictions could be in place until spring 2021.

The comments follow Matt Hancock’s interview on BBC Radio 1′s Newsbeat programme. When asked how long the new law would be in place, Hancock said “for the foreseeable future”, adding this could mean beyond Christmas.

“I’d like to be able to relax them before Christmas, obviously,” said Hancock, but when pushed to clarify if families will be able to celebrate together by then, he acknowledged: “Not necessarily.”

In July, Muslim families across the north-west of England were forced to change or cancel long-awaited Eid celebrations with just hours’ notice when new lockdown rules were imposed.

Looking ahead to Christmas 2020, HuffPost UK asked three experts for their predictions, and although each said it’s too early to say for certain, it doesn’t look good.

“Christmas will not be the same – of that I am absolutely sure,” says Sally Bloomfield, honorary professor at the London School of Hygiene and Tropical Medicine. “To what extent Christmas may be cancelled depends on us right now.”

Given the current increase in UK Covid-19 cases, all three experts believe the six-person rule will be in place for some time, with the possibility of restrictions being extended further.

“The re-opening of schools and the shedding and seeding of the virus more widely in the population leading up to Christmas will make ongoing, leap-frogging, Covid-19 outbreaks more likely,” says Dr Julian Tang, consultant virologist and honorary associate professor, at the University of Leicester.

Christmas day (and the lazy period afterwards) doesn’t pose a big problem in itself, he adds. It’s the run-up that’s the issue.

“In the UK – unlike in Asia where everything is open and people go out a lot – Christmas is mostly a home and family affair – almost like a voluntary, self-imposed lockdown for a few days,” he says. “However, the main risk is likely the pre-Christmas shopping days and the festive spirit that this creates.”

“Shopping online for Christmas is safer but much less atmospheric and festive, so may not be so popular,” he says.

Although some universities are conducting lectures online until 2021, Prof. Bloomfield is concerned about the impact of many students returning home from campus.

“They’ll have Christmas parties and then they’ll come home and spread out across the country and spread the virus elsewhere,” she says. “It just doesn’t really bear thinking about.”

Paul Hunter, a professor of medicine and expert in infectious diseases at the University of East Anglia, is a little more optimistic.

Christmas is a religious festival and will never be formally “cancelled”, points out Prof. Hunter, but we may need to celebrate it in more intimate ways this year. Judging by the current trajectory, the next peak infection rate could be December to January, he adds.

“The big office work parties and things like that almost certainly won’t be happening in my view, which some people might breath a sigh of relief at,” he says.

In Wednesday’s Downing Street briefing, Boris Johnson confirmed that “Covid-secure venues,” such as places of worship, would be exempt from the six-person rule.

Even if church ceremonies do go ahead as usual at Christmas, “the big issue about churches is the age distribution,” says Prof. Hunter.

“Most people who attend tend to be quite old, on average. It’s quite plausible that the government may recommend shielding again at some point, probably sooner rather than later, I would guess,” he adds. “Even if church services can go ahead, it may be the case that three quarters of the congregation can’t turn up because they’re supposed to be shielding.”

“Schools won’t be getting loads of parents into a hall to watch their children pretend to be shepherds,” he says.

Of course, if the six-person rule is still in place, multi-household meals won’t be happening. Even if restrictions ease, granny might need to stay home.

“Covid-19 can be more severe in older populations,” says Dr Tang. “So, sadly, multi-generational family gatherings may be potentially less safe and may need to be avoided.”

A vaccine may be available by Christmas, says Prof. Bloomfield, adding a glimmer of hope. But the chances of it being rolled out nationally by December are slim.

“It will take many, many months to produce enough vaccine to produce what we call ‘heard immunity’,”  she says. “There might be enough for those at highest risks –  healthcare workers and people in extremely vulnerable groups – but to produce population herd immunity by Christmas, from what I’ve heard, is not a possibility.”