So, Did We Actually Get Better At Cooking During Lockdown? - Rugby and Daventry Radio Station Midlands UK

First came the frenzy of sourdough bros, then we went bananas for banana bread. Back in April, at the height of lockdown, more than a fifth of us were cooking every meal from scratch according to a research conducted by Tesco, and 35% of us were getting better at using leftovers to avoid food waste.

Cookery classes boomed on Zoom, grocery box deliveries became standard fare – and the only way we could share a meal was calling each other on FaceTime. This was a world before Eat Out To Help Out and we embraced it.

But since that collective forced hibernation, have we actually kept up our new habits or let them slide? Are we better cooks than we were six months ago?

Personally, I had an initial burst of enthusiasm and creativity thanks to simply having more free time on my hands. I played around in the kitchen recreating fast food items like chicken nuggets, McDonald’s vegetarian McMuffin, and taste-tested IKEA meatballs for work.

I also became obsessed with making Cantonese dishes like doufuhua (tofu pudding), turnip cake, and claypot rice in a bid to learn more about my heritage and to connect with my parents, who were stuck on the other side of the world – yeah, thanks coronavirus. I cooked and they guided (read, slated) me every step of the way on video call.

However, as the months went on and the lockdown rules relaxed I slowly drifted back into the same comfortable cooking routine, falling back on the quick and trusty stir-fry recipes I’ve always had on heavy rotation. Am I the only one?

I asked other people whether their culinary journeys during lockdown changed their eating habits for the better or worse longterm. Here’s what they told me.

‘I wanted to learn how to make Korean food’ 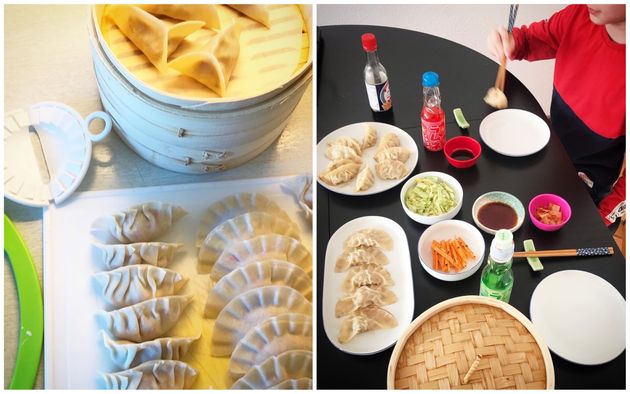 Stine Kyung Pitney, 46, from Copenhagen, went all in during lockdown, learning how to cook Korean food and a handful of other Asian dishes for herself and her two sons.

“The first thing I made was gyoza. I just had a craving for them, and since all the restaurants were shut, I thought I’d try and make my own,” she tells HuffPost UK. “It went really well, so I have done that a few times with my youngest. I found out that I can get into my zen zone by just chopping a lot of vegetables. I love planning a meal, and will do so several days, even weeks, in advance.”

Pitney has always had a keen interest in food and cooking, but only recently did she become interested in her own Korean heritage, her upbringing, and being adopted, which she feels can be connected to food.

“I think the way we eat says so much about us. Food is for feeding, but it’s also history, culture, class, heritage,” she explains. “Using a steamer was new to me and learning how to cook with oils that aren’t olive oil (which for some reason is the only oil we cook with in Europe) was something I had to get used to. When I cooked Kongbul (soybean sprout bulgogi), one of my foodie friends remarked that it’s done completely opposite to everything she has learned.”

‘I genuinely make the best cheese toasties in the world now, no exaggeration’ 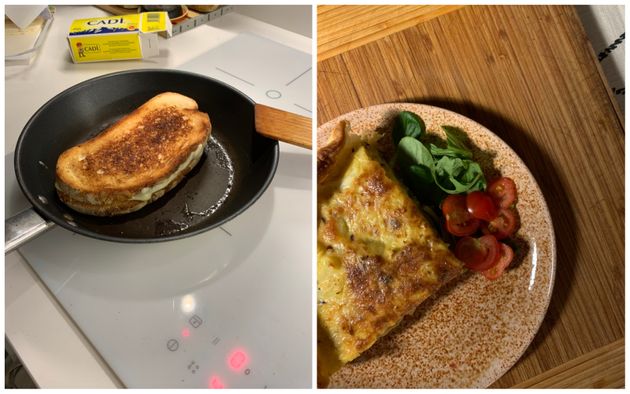 Paul Gibbins, 31, a Newcastle-native writer based in Barcelona, went for classic comfort dishes such as quiches and cheese toasties, rather than anything ambitious and crazy. The Spanish lockdown was very strict, more so than the UK, which meant Gibbins had to cook at home for weeks, until restaurants felt confident enough to do takeaways and deliveries again.

“During lockdown, we realised how much of our favourite comfort foods and the way we eat them is based on having no time or energy left to cook,” he says of him and his partner.

“We started to get more creative with the basics, experimenting with ingredients or buying better quality ingredients and cooking them in a less rushed way. Life in general slowed right down, and cooking as a shared activity became something enjoyable and intimate, rather than one of us sorting dinner while the other was busy or out. I genuinely believe that I make the best cheese toasties in the world now, no exaggeration.”

Besides mastering the perfect cheese toastie, Gibbins became obsessed with his blender, leaning how sauces complement dishes and which flavours work together.

“Whether it’s just a simple garlic yoghurt sauce as a dip, or more complex curries and salsas,” he says. “Even learning how to make Nandos sauce is just something we’ve done for a laugh with our friends, I don’t even like Nandos that much, but it’s a shared cultural reference that we can’t access here.”

‘All the joy of taking time to cook disappeared’

Not everyone was living the foodie dream during lockdown. Henry Rowling, 43, who runs charity consultancy, Flying Cars, used to love trying new recipes out, but his priorities changed and cooking became more of a chore, he says.

“It was hard to get supplies into the house – all delivery slots were gone and so I found myself queuing up in Tesco car park at 5:45am to get into the shop. With that backdrop it became buy whatever you can get your hands on,” Rowling explains.

“We ate a lot of rice, dhal and stir fries. Simple food that was quick to cook, but all the joy of taking time to cook and enjoy it disappeared. My wife and I were physically exhausted every day. We have both worked non-stop for the last six months and worked harder than ever before – with full-time childcare on top of that and finding time to exercise to deal with the stress of everything going on.”

‘You can’t smoke a shoulder of pork from the office!’ 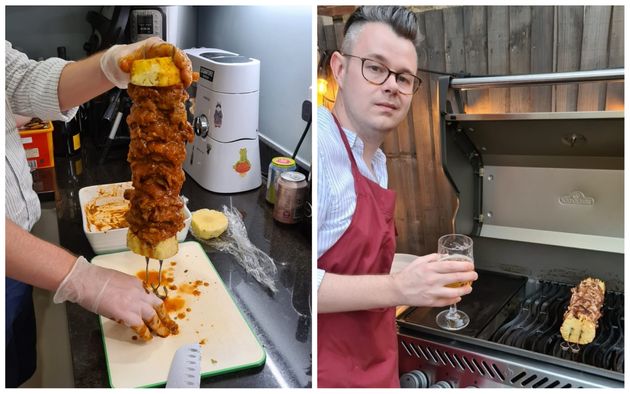 William Knox-Walker, 34, from east London, who works in IT, made full use of lockdown, cooking everything from bagels to pizzas and tacos al pastor from scratch –– even investing in a barbecue and a wood-chip smoker to spend more time in the garden.

“I’m still working remotely and try and cook as much as possible. I’ve been suffering from fatigue due to long-term complications with Covid recovery from the beginning of March,” he says. “Cooking is one of those tasks which brings me a lot of joy even as I end up tired and having issues with smell and taste.”

For Knox-Walker, the weekdays are reserved for a fairly light set of meals, and approaching the weekend he turns it up a notch and tried his hand at something fancier.

“My work is still nine to five. But when I can be in my kitchen and working on something by six, rather than on a train or working out, then it suddenly becomes a lot easier to spend the extra time on cooking,” he explains.

“A shoulder of pork can take over 10 hours to smoke, which I wouldn’t be able to do if I was in the office!”

Rugby and Daventry Radio Station Midlands UK > News > National And International News > Huffpost > So, Did We Actually Get Better At Cooking During Lockdown?

Disabled People Are Anxious About Returning To Work. Do Not Forget Us