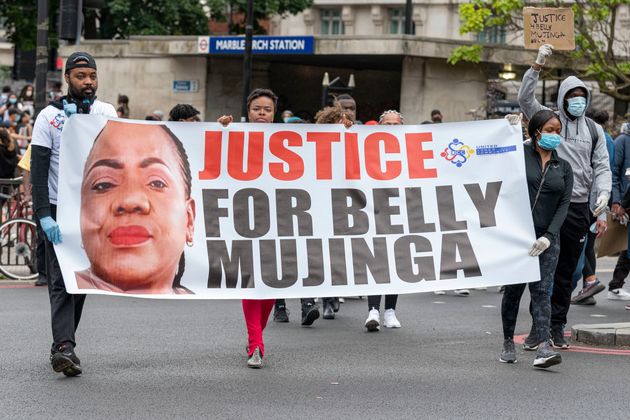 The family of railway worker Belly Mujinga are calling for an inquest into her death, which came after she was allegedly spat at by a man who claimed to have Covid-19.

The 47-year-old, who suffered from a condition known as scarcoidosis, which is linked to breathing difficulties, died in April less than two weeks after the alleged incident at London’s Victoria rail station, leaving behind her husband and an 11-year-old daughter.

British Transport Police (BTP) interviewed a 57-year-old man over the incident but said there was not enough evidence a crime had taken place.

Detectives found there was insufficient evidence of spitting or another action that could lead to infection and concluded Belly’s death did not occur because of that incident. At the time of her death, Belly was employed by Govia Thameslink Railway (GTR) as a frontline worker.

In a letter to Boris Johnson, Lawrence Davies, of Equal Justice Solicitors wrote: “A public inquiry would be the best vehicle for determining what happened, why it happened, who is to blame for that, and what can be done to prevent such tragedies befalling Black and/or frontline staff in the future.”

Davies sets out 22 points of concern about the conduct of GTR in relation to the alleged incident, including why Belly had been working outside without any PPE in light of her medical condition, why she had been sent back outside even after reporting the assault to management, and why it failed to report it to the police  – it was later reported by Belly’s union, the TSSA.

Davies lists the points in relation to the granting of an emergency contract to GTR in September to continue to run the Thameslink railway until 2021/22, “conditional upon GTR performing their service to the public safely and efficiently.”

He said: “We need to know if GTR are properly protecting the health and safety of their staff and the public and in particular that of their BAME staff, who are more vulnerable [to] racial assault/harassment at work and Covid-19 fatality.”

This week, a BBC Panorama investigation featured the story of Belly, with barrister Christopher Williams telling the programme: “If the family… want to pursue an inquest, then that is a way of getting justice.

“It may be that the outcome of the inquest won’t give them the result that they seek, but the important thing is that they have the opportunity to go through the process.”

The TSSA has also written to the prime minister calling for an inquest.

It highlighted a number of questions from the BBC programme which require answers and which, aired in public at an inquest, would cast light on the matter:

1. Belly’s family claim she told them she had been spat at, and a police officer is quoted in the film saying “we are in no doubt something has happened there”. Has the spitting allegation been properly and fully examined?

2. Why was Belly allowed to work on the station concourse given she had an underlying serious medical condition (sarcoidosis) which affected her breathing? She was only eventually authorised to shield after her doctor telephoned her employers after the incident.

3. Why did GTR produce two different versions of its internal investigation findings – with only one showing that Belly’s condition had led to throat surgery and required regular medical check-ups?

4. When GTR began their own investigation why did the company not call in the police? It was seven weeks after the incident before BTP were alerted, and only after our union issued a press release about Belly’s death.

5. How can the police be sure the man interviewed about the incident did not have, or had not had, the virus given that the negative antibody test he’d had at that time may have been unreliable? This point is highlighted in the programme by both a Professor of microbiology and a Professor of clinical immunology. Indeed, Jon Deeks, Professor of biostatistics at the University of Birmingham, told the BBC: “The police have made a mistake here with the interpretation of that evidence.”

6. Panorama also highlighted conflicting reports about whether the man told Belly and her colleague that he “had the virus”. As Martin Forde QC told the programme: “I feel there are sufficient doubts and conflicts around the facts of this case to justify an investigation.”

Thousands of activists, including members of Belly’s family, have marched in her name, calling for “Justice for Belly Mujinga”. More than two million people have signed a petition calling for the same.

GTR has published the results of its own internal investigation into Belly’s death online. In it, it states that “neither Belly nor either of her colleagues present made any complaint of spitting.”

It adds: “Whilst managers at the station were aware of some health conditions that meant Belly had regular medical check-ups and some restrictions on her operational duty, they did not know the exact nature and details of these conditions. These conditions did not restrict her ability to work on the concourse.”

It states that Belly answered a staff questionnaire asking her to identify any health conditions by recording only “blood pressure” on the form and not disclosing anything else. It accepts the company’s occupational team had more detailed information on her condition but that Belly had asked for this to remain confidential.

It adds: “On March 25, Belly reported that her GP advised her to shield with respect to coronavirus. Given this information, on the same day GTR’s occupational health team recommended that Belly should self-isolate for 12 weeks. Belly then self-isolated from March 26.”

This timeline puts Belly as going into self-isolation five days after the alleged incident.

GTR’s Angie Doll told HuffPost UK: “Belly Mujinga was a much-loved and very popular member of our team at Victoria and we, like so many others, remain heart-broken by her loss.

“We completed and published our investigation report in August and as people know now, the police and the CPS did conclude that there was no spitting incident.

“Our thoughts, as ever, remain with Belly’s family and most of all her husband and her daughter. We continue to support them in any way we can.”