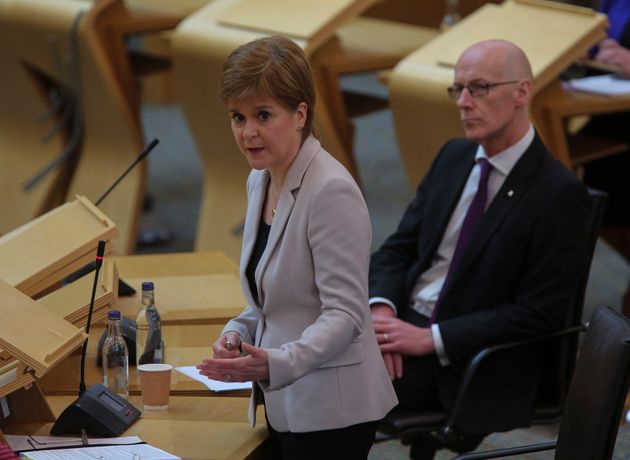 All school leavers’ grades that were lowered by “biased” computer algorithms in Scotland last week will be withdrawn and replaced by teacher assessments, the SNP-led government has confirmed.

The major U-turn by Scottish education secretary John Swinney comes amid mounting criticism that poorer students were hit hardest by modelling that gave them unfairly harsh results during the pandemic.

The results for Scotland’s Higher awards were last week branded a “disaster” after the Scottish Qualifications Authority (SQA) downgraded 124,000 results.

Teachers, parents and pupils hit out at the SQA after the results downgraded teachers’ recommended awards for pupils from the poorest 20% of areas by more than 15 points, while recommendations for the best-off pupils were downgraded by just under 10 points.

Swinney, who may still face a vote of no confidence in Holyrood over the issue, has now said all grades moderated down will be withdrawn and new certificates sent out.

Meanwhile, no results that were moderated up will be cut back.

The news will pile pressure on Gavin Williamson, England’s education secretary, to avoid a similar catastrophe south of the border when A-level results are published this week, amid concern the same modelling could be used.

Speaking in the Scottish Parliament, Swinney said he had “listened carefully to young people” and had moved to “fix” the problem quickly.

He said: “Using powers available to me in the Education (Scotland) Act 1996, I am today directing the SQA to re-issue those awards based solely on teacher or lecturer judgement.

“Schools will be able to confirm the estimates they provided for pupils to those that are returning to school this week and next.

“The SQA will issue fresh certificates to affected candidates as soon as possible and, importantly, will inform Ucas and other admission bodies of the new grades as soon as practical in the coming days to allow for applications to college and university to be progressed.”

He added that the government accepts that “concern [over inflation of marks] is outweighed by concern that young people from working class backgrounds may lose faith in the education system and conclude that the system is against them”.

First minister Nicola Sturgeon on Monday apologised to thousands of pupils whose results were downgraded by the moderation process and pledged they would not face an arduous appeals process.