Rough sleepers could face a greater risk of violence and the “impossible decision” of catching coronavirus or freezing out on the streets if the government does not provide emergency accommodation in the winter months, a homelessness charity has warned.

The number of people sleeping rough is expected to rise dramatically in the coming months, owing to a combination of factors caused or exacerbated by the coronavirus pandemic.

In March, communities secretary Robert Jenrick announced £3.2 million in emergency funding to help rough sleepers to self-isolate, in a bid to prevent the spread of Covid-19 amongst homeless communities. In a matter of days, the government’s ‘Everyone In’ scheme enabled local authorities to place 90% of rough sleepers in emergency accommodation such as hotels and empty apartment blocks.

Although it was hailed as a success, the scheme was just temporary. And despite the government’s efforts, rough sleeping in London between April and June this year still increased by 33% compared to the same period last year, while the number of new rough sleepers rose by 77%.

If the government does not provide emergency accommodation where people can self-isolate, the consequences of a second coronavirus wave could be deadly for the homeless population, says Matt Downie, director of policy at the homelessness charity Crisis.

He described the ‘Everyone In’ scheme as a “unique event in the living memory of anyone who has worked in homelessness”. “It was amazing at the time but what we’ve subsequently learned is there hasn’t been a systematic next step,” he told HuffPost UK. “We’re now at the point where rough sleeping is back.”

People are being murdered, people’s tents are being burnt down, people very commonly report having been urinated on in their sleep.

Fears of a “tsunami” of homelessness across the country over the winter months have been compounded by the end of the eviction ban on Sep 20 and mass job cuts expected in the aftermath of the end of the furlough scheme at the end of October.

Networks that people often rely on, such as spare bedrooms and sofas of friends or family, have also been closed off because of lockdown measures and social distancing restrictions.

In communal dorm-style night shelters – which have almost all been shut since the start of the pandemic – it is almost impossible to ensure a Covid-safe environment. Even with infection control measures, these places could easily become centres of virus outbreaks.

Rough sleepers could also be more exposed to “unbelievably horrific” violence on the street as a result of the pandemic, Downie added.

“People who are sleeping rough often talk about there being safety in crowds and in numbers, that the risk of abuse and attacks is best mitigated if you can be around where the general public is, so there are people walking past or places where there are CCTV cameras.

“When the full lockdown happened, the people who were still out on the street did report their environment being a lot more of a scary place to be. There was no one around in the city centre, no police or shopkeepers or the general public.” 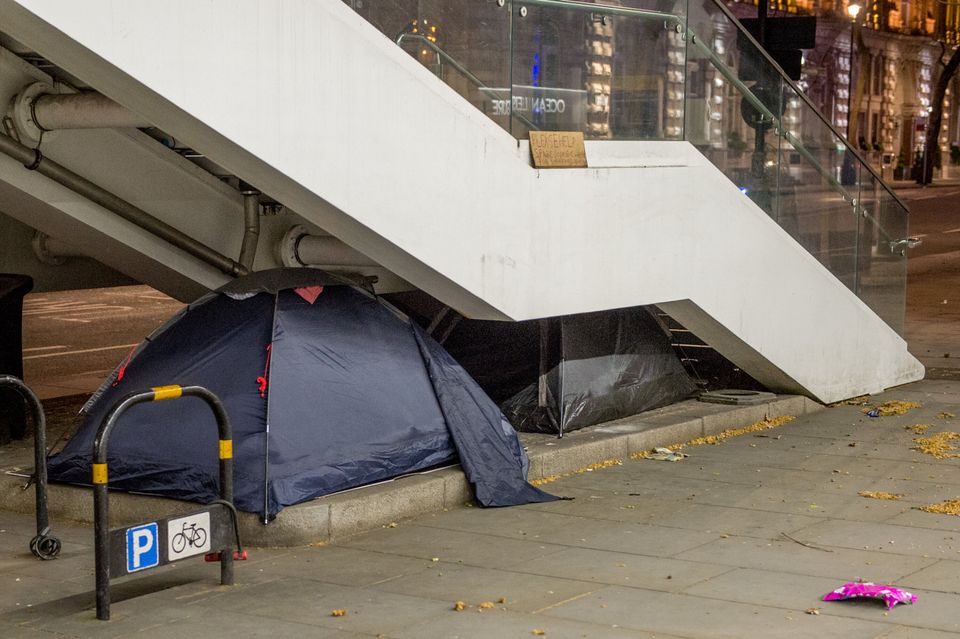 A report by Crisis has found that rough sleepers are almost 17 times more likely to have been victims of violence. Almost eight out of 10 had suffered some sort of violence, abuse or anti-social behaviour in the past year – often at the hands of a member of the public.

“It’s a disturbing element of how homelessness is treated in this country because you see enormous generosity from the general public, but from a particular minority of people really quite unbelievably horrific attacks happen on a regular basis,” says Downie.

“People are being murdered, people’s tents are being burnt down, people very commonly report having been urinated on in their sleep.”

And while ‘Everyone In’ did successfully house 15,000 people into emergency accommodation at the start of the pandemic, the scheme ultimately gave the false image that homelessness was an easily solvable issue, according to Jon Glackin, a co-founder of the grassroots group Streets Kitchen.

“It’s bad messaging,” he tells HuffPost UK. “People have the impression that all homeless people can get a place in a hotel, it’s insane.”

The charity has called on the government to provide a clear legal requirement and funding for local councils to get people into self-contained accommodation.

“We’re facing an impossible situation where either thousands of people are going to be freezing on the streets, or they face the risk of catching coronavirus in night shelters. That’s a false choice because we’ve seen through the ‘Everyone In’ initiative that you can provide safe, self-contained accommodation for people.”

“We’re desperately pushing the government to act in the way that it did back in March.”

Some campaigners have suggested using empty commercial buildings and office blocks in town and city centres as makeshift shelters this winter.

A recent study by the University College London found the ‘Everyone In’ scheme prevented as many as 266 deaths and saved tens of thousands of some of the most vulnerable people from catching coronavirus.

He said: “We urgently need alternative emergency single-room accommodation so that communal night-shelters are not forced to reopen.”

Minister for Rough Sleeping and Housing, Kelly Tolhurst, said: “We took decisive action at the height of the pandemic to protect hundreds of lives by bringing nearly 15,000 of the most vulnerable into safe accommodation.

“We are giving over half a billion pounds to tackle homelessness this year to provide longer-term accommodation – including 3,300 homes this year alone – and tailored support so as few people as possible return to life on the streets.

“We are working with councils, charities and other partners to protect vulnerable rough sleepers this winter and also as part of our commitment to end rough sleeping for good.”