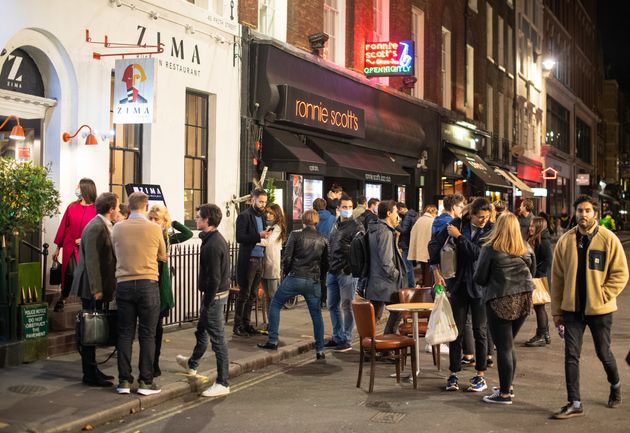 The government’s new 10pm curfew is causing chaos on the ground, with some people simply drinking faster before being ejected onto the streets en masse, it has been claimed.

One pub manager told HuffPost UK his business had just enjoyed its busiest weekend since lockdown lifted, suggesting the curfew is doing little to stop the spread of Covid.

But another warned of a dip in customer confidence, fuelled by chaotic scenes on the street at kick-out time, that appeared to be putting some drinkers off and could leave less fortunate businesses unable to survive at all.

It is seen as an attempt to “scapegoat” the hospitality industry for ministers’ failings on coronavirus.

Kate Nicholls, CEO of the UK Hospitality trade body, said the government should have staggered dispersal times and warned that the hard curfew was creating bottlenecks that were nothing to do with alcohol.

Day three of a 10pm curfew: people in Liverpool have gone to the off license to pick up more drinks and continue to party in the street. pic.twitter.com/GOMhNp5rDl

(10pm curfew just meant everyone rolling out onto the streets and onto the tubes at the same time and it was the busiest I’ve seen central London in months) pic.twitter.com/7oWKH5APNG

All the 10pm curfew done was create a new rush hour. This UK is finished 😭😭😭 pic.twitter.com/bOiqA2scEd

She said: “It’s not all down to alcohol – it’s a funnelling of people in a very small period of time. If you were leaving a coffee shop you’d have challenges in social distancing if you all had to be out by 10pm.

“Even at a small level, there are challenges to managing that process. If you have 30 to 40 people having to leave a pub or a restaurant and all get into their cars, there’s still a crush in the car park and you’re struggling to social distance.”

Christian Campbell, manager at the Cock Tavern in Hackney, said customers were “definitely drinking more” since the curfew was introduced on Thursday. “The cheeky ‘quick half’ punter has gone,” he told HuffPost UK. “The groups camping on a table and buying loads of rounds are here.”

Nicholls, meanwhile, points out that the government itself asked the hospitality industry to include staggered dispersal times in its risk assessments ahead of the Covid-secure protocols for reopening on July 4.

She said: “That is just normal good practice. Every police, licensing inspector and local authority inspectorate is able to manage that process of a closing time and a 20-minute period of grace. It’s not ‘drinking up time’ – it’s a period of grace to get people out safely.”

When the Licensing Act came fully into force at midnight in 2005, it spelled an end to 11pm last orders and helped regulate the dispersal of customers.

Nicholls said: “That’s what we’ve spent the last 15 years working on, since the legislation was changed. Prior to 2005, we did have a fixed closing time, all premises closed at the same time and there were problems with dispersal and that’s why staggered opening and closing hours were introduced in 2005.

“The curfews are not changing people’s behaviour on the streets and public transport after they leave the safe, well-regulated environment of a hospitality venue.”

However, as Nicholls points out, those scenes were not evident in Cardiff this weekend, where in contrast to the rules in England pub-goers are being given an extra 20 minutes to finish their drinks after last orders.

“We did not see those scenes in Cardiff – so I think this is not a hospitality industry issue so much as a broader, public space, public realm issue that needs to be considered now.

“Clearly if the government was hoping that by introducing a curfew they would send a message to consumers and the general public about their own behaviour, that message doesn’t appear to have got through.”

Tim Foster, co-founder of Yummy Pubs, says the government was strongly warned against having a curfew by industry members.

Managing after hours dispersal is something Foster has worked on diligently for some time. Before he took over a site in Mile End, 35 members of the public had been represented at a licensing hearing demanding its licence be revoked. In the five years since Yummy Pubs took it over, the site has employed tactics including early closure of the garden and only dispersing customers in groups of five or six at a time, and was recently able to extend its hours – without a single resident in opposition.

As he told HuffPost UK: “We do this proactively.”

While Foster believes staggered curfews are “absolutely” a solution in the current circumstances, he went as far as to say: “I genuinely don’t believe a curfew is required at all. It hasn’t been required since we began trading again after lockdown but the problem is this government has lost the ability to communicate with this generation and it is trying to focus everyone’s attention on blaming hospitality.

“It’s ludicrous that they’re telling everyone to shut at 10 o’clock and throwing everybody out onto the streets.

“I’m having to send people home with puddings in cardboard boxes because they’re not allowed to enjoy the rest of their evening in a leisurely manner.”

Foster believes the curfew – and the resultant situation which is seeing thousands of people in the streets after closing time – is causing his customers to doubt whether he can provide safe environments for them.

He said: “We’ve definitely seen a downturn in consumer confidence. We saw a lot of cancellations over the weekend, which have been driven by fear. It has put questions in their minds as to whether we are a safe place now.”

Foster also fears the government may try to use the coverage of the chaos on the streets after curfew as an excuse to impose a second lockdown.

He said: “We gave them the warning when they suggested this was what they would do. They didn’t listen to any of our representatives. We tried to work together – I potentially won’t survive a second lockdown.

“It feels like they are trying to scapegoat the industry and using the pictures to say: ‘We’re going to have to lock you down, then,’ when actually they have created this.”

Greater Manchester mayor Andy Burnham has called for an urgent review of the 10pm curfew, warning it may be doing “more harm than good”.

Burnham said the early closing time was leading to a rush to off-licences and creating an incentive for people to gather in each others’ homes.

“I received reports that the supermarkets were absolutely packed out to the rafters with people gathering,” he told BBC Radio 4’s Today programme.

“I think there needs to be an urgent review of the emerging evidence from police forces across the country.

“That is the opposite of what our local restrictions here are trying to do. I don’t think this has been fully thought through.”