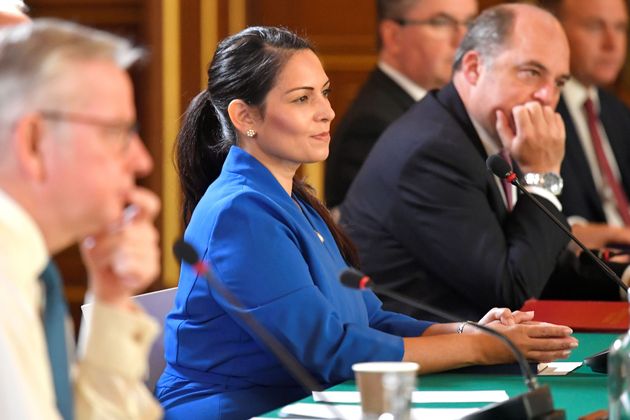 Home secretary Priti Patel has been accused of using “divisive and deceptive” language after complaining “activist lawyers” were frustrating the removal of migrants.

Patel on Thursday posted on Twitter that the government had removed people who had arrived in the UK in small boats and had no “legal right” to be in the country.

But she said that efforts to remove more migrants were being “frustrated by activist lawyers”.

“They had previously claimed asylum elsewhere and had no legal right to be in the UK.

“Removals continue to be frustrated by activist lawyers, but I will not let up until this route is unviable.”

Today we removed people who came here via small boat.

They had previously claimed asylum elsewhere and had no legal right to be in the UK.

Removals continue to be frustrated by activist lawyers, but I will not let up until this route is unviable https://t.co/oc1sOTTOae

Her comments come a week after the Home Office was forced to abandon using a video which accused “activist lawyers” representing migrants of trying to disrupt the asylum system after a barrage of complaints.

Amanda Pinto QC, chair of the Bar Council, said that lawyers should not be political targets for simply doing their jobs.

She added: “Irresponsible, misleading communications from the government, around the job that lawyers do in the public interest, are extremely damaging to our society.

“Legal professionals who apply the law and follow Parliament’s express intention, are not ‘activists’.

“They are enabling people to exercise their statutory rights and defend themselves against those in power. Without those lawyers, our system would crumble.

“The justice system provides a vital check and balance and should not be attacked for the sake of political point-scoring by the Government.

“We strongly condemn the use of divisive and deceptive language that undermines the rule of law and those working to uphold it.”

The Home Office published a video on Wednesday August 26 showing a moving graphic of planes leaving the UK with the caption: “We are working to remove migrants with no right to remain in the UK.

“But currently return regulations are rigid and open to abuse…

Jonathan Portes, a professor of economics at King’s College London, said he complained to Rycroft about the video, and in a post on Twitter, on Thursday August 27, quoted his response as: “I agree the phrase you quote should not have been used on an official government channel.

“I have made clear to the team this post should not be used again from Home Office accounts or anywhere else by civil servants.”

The Home Office press office confirmed the response was accurate and that it would no longer be using the video or the phrases included in the footage.

A record 416 migrants arrived in the UK on small boats on Wednesday, the most ever on a single day.

The figure was revised up from 409 by the Home Office on Thursday morning.

The total number of migrants who have crossed the sea to Britain in 2020 is now more than 5,600.