The ITV presenter revealed that there had been dramatic scenes during a commercial break on Wednesday when the rodent was spotted scuttling across the studio.

And he couldn’t resist a dig at BBC Breakfast host Dan, naming the mouse after him, before beginning to impersonate him.

😂Dramatic breaking news from the GMB studio – we have a mouse 🐭

“Dramatic breaking news,” Piers quipped. “There’s mouse on the studio floor. There have been shrieks and wails. There’s been a lot of drama here in the commercial break.

“It’s under one of the cameras. We just don’t know which one.”

After capturing it on camera, Piers said “Shall we call it Dan Walker?” before beginning to impersonate Dan. 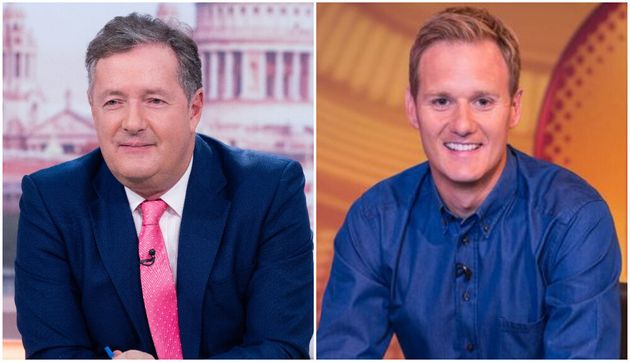 Weather presenter Laura Tobin also captured video footage of the rodent disappearing through the wall, saying it was on its way to This Morning’s studio next door.

🐭 The tiny @GMB mouse is now off to @thismorning 👋 pic.twitter.com/5JGWKqEVSY

The two presenters have had a long-standing – but mostly amicable – feud in the media for the last few years, which has mostly revolved around the ratings of GMB and BBC Breakfast.

However, things kicked up a notch back in May, when Dan appeared to take a shot at Piers’ approach to interviewing government ministers about the coronavirus crisis, writing: “It is possible to challenge politicians & and ask difficult questions without shouting, interrupting [and] telling everyone you’re brilliant at holding them to account.”

Elton John Hits Back At Rod Stewart As Feud Deepens: ‘He’s Got A F***ing Cheek’