This Morning viewers got a lot more than they bargained for when they tuned into the first show of the week, when a nudist revealed a little more than was probably intended.

During Monday’s live broadcast, roving reporter Josie Gibson paid a visit to a naturist site, interviewing various guests in a feature that was, obviously, absolutely jam-packed with innuendo.

Later in the show, Josie even got in on the fun, presenting a competition segment while seemingly in the buff herself.

Unfortunately, while various items were used to protect the modesty of those around her, one chap standing behind a car door wasn’t quite positioned correctly meaning he ended up flashing his penis to the entire nation.

And as you can see, Phillip Schofield and Holly Willoughby’s faces as the scene unfolded pretty much said it all.

“That was close,” Schofe joked back in the studio, adding: “We were right on the ragged edge there.” 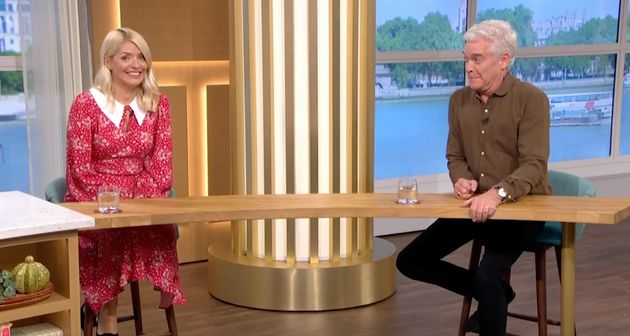 Omg just looking at @Schofe & @hollywills faces on @thismorning with the nudist man behind the car door showing a bit more than he should.. 😂🙈

Not a great cameraman on This Morning during the nudist segment pic.twitter.com/q7u3cfey3K

Oh my god, the accidental willy flashes on @thismorning have had me howling 🤣🤣#thismorning#allout#nudist

OMG did anyone watch @Josiestweet reporting live from a nudist colony on @thismorning 😂😂😂 One of the blokes stood behind a car they were advertising literally had his knackers completely out accidentally😂😂😂 @hollywills & @Schofe were hanging off their chairs. Go watch it😂

In recent times, Josie’s often-chaotic segments on This Morning have provided plenty of entertainment for us.

This included the former Big Brother contestant riding an epic rollercoaster live on air, and more recently, when she tried out zip-lining, with suitably ridiculous results.

Josie will soon be teaming up with fellow This Morning favourite Alison Hammond for a new recurring travel feature, which will see them touring the UK to find the best spots for a staycation.

This Morning airs every weekday from 10am on ITV