Frontline social care workers should be paid at least £10 an hour or there will be staff shortages after Brexit in the middle of the coronavirus pandemic, government advisers have warned.

The end of free movement of EU workers into the UK poses “stark” risks of increased pressure on social care unless ministers urgently boost funding and wages to attract British workers to fill shortages, the Migration Advisory Committee (MAC) said.

MAC chair Professor Brian Bell said the government should be looking to boost wages to at least £10 an hour to attract domestic workers to fill care staff shortages.

But health secretary Matt Hancock warned earlier this month that Covid-19 had delayed the government’s efforts to deliver a new long-term funding settlement for social care – which had been a Tory manifesto pledge.

The government has faced criticism for failing to do enough to prevent tens of thousands of deaths in care homes during the pandemic.

On Tuesday, the committee added senior care workers and nursing assistants to the “shortage occupation” list, which will mean they find it easier to enter the UK once the Brexit transition and free movement end on December 31.

But frontline care workers are not eligible for the list because they are not classed by the government as “skilled” workers, meaning they will find it very difficult to enter the UK from 2021 under home secretary Priti Patel’s points-based immigration.

MAC said it had argued “for years” that social care funding needs to be boosted so higher wages can be paid to make frontline roles more attractive to British workers, instead of the sector “relying on migrant workers to fill the gaps”.

Its report on shortage occupations said: “The risks of this funding increase not happening in a timely manner are stark.

“If that does not occur, or occurs with substantial delay, we would expect the end of freedom of movement to increase the pressure on the social care sector, something that would be particularly difficult to understand at a time when so many care occupations are central to the Covid-19 pandemic frontline response.”

Bell made the comparison between an entry-level wage for working on the shop floor at Aldi being £9.40 an hour and carers earning £8.72 an hour for “extraordinarily stressful and hard work”.

But his personal view is that they should be paid “significantly higher than £10 an hour”, he said.

How to fund the rise, he said, is a matter for government, which has received reports for “many years now” suggesting different methods. There needs to be progress and decisions made, he added. 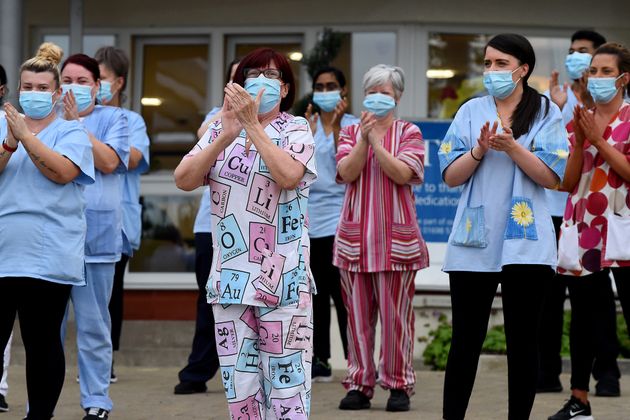 MAC has found “clear evidence” of staff and skills shortages which could be filled by overseas workers in a number of skilled roles.

This means that after Brexit they will effectively be able to come to the UK if they have a job offer and speak English, under the points-based immigration system.

MAC also found that some industries felt it was difficult to find relevant skills among British workers to fill job vacancies.

Industries responding to the advisers’ call for evidence suggested this was down to the skills taught in schools, the urbanisation of the UK, and the general “work readiness” and “work ethic” of British workers.

“In some areas with particularly high employment, employers said that many of those people who did not already have a job did not want one, and only applied for positions to appear as though they were looking for work,” the report said.

There is a particular lack of skills in agriculture, fishing, food processing, textiles, European languages, “mental arithmetic skills” and “the ability to undertake arduous physical work”.

Foreign workers were said to be more willing than Britons to relocate for work, particularly to rural areas, undertake hard and physical work, work in unattractive conditions, or take up work that is insecure, seasonal or temporary in nature.

The MAC also recommended additions to separate shortage occupation lists for all of the devolved nations.

This includes fishmongers, bakers and horticultural workers for Northern Ireland, childminders and nursery nurses for Scotland and health professionals for Wales.

Bell said: “The number of migrants coming to work in the UK has already decreased and we are likely to see an increase in unemployment over the next year as the economic impact of the pandemic continues, so this has been a very challenging time to look at the shortage occupation lists.

“It has made us more willing to recommend some roles for inclusion simply because it is the sensible thing to do, but we have been clear that migration is not always the solution.”

Boris Johnson’s official spokesperson said: “Firstly, we thank everyone who has worked and continues to work on the coronavirus response. We are helping the care sector in a number of ways, including £1.5bn more funding for adults’ and children’s social care in 2021, and the national recruitment scheme.

“We have set out that we want the employers to focus on investing in the domestic workforce.

“We will be looking at the recommendations closely and responding in due course, but it is worth noting that the Migration Advisory Committee itself is clear that immigration isn’t the solution to addressing staff levels in the social care sector.

“The government is committed to delivering a fairer points-based immigration system based on the skills that people have rather than where they come from.”