One Year Ago, I Survived The Halle Synagogue Terror Attack. Here's Why I’m Worried About the Left - Rugby and Daventry Radio Station Midlands UK

One Year Ago, I Survived The Halle Synagogue Terror Attack. Here’s Why I’m Worried About the Left

One Year Ago, I Survived The Halle Synagogue Terror Attack. Here’s Why I’m Worried About the Left 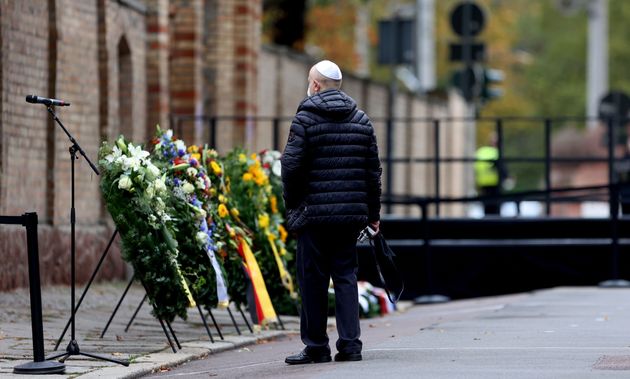 Last year, I travelled with a group of other young Jews to the city of Halle, Germany, to observe Yom Kippur with the local community.

A few hours into the service, a neo-Nazi terrorist armed with guns and explosives tried to slaughter us. All of us inside the synagogue survived, largely through sheer luck, but tragically the killer succeeded in murdering two innocent people nearby.

And yet, it’s the left that worries me, and more specifically a set of pernicious tendencies that have crept into our discourse in the past few years. I say this despite (or rather because of) the fact that I am decidedly left-wing myself.

Under our very noses, the mainstream left has drifted away from universalist compassion towards a cruel tribalism that we have long associated primarily with the right.

This should terrify all of us, and for several reasons.

The first and perhaps most obvious cause for alarm is that we are betraying our principles. This is inherently dangerous.

Although the left does not pose the kind of imminent violent threat that the far-right does, we are nevertheless moving towards an extremism of thought that historically has often ended in bloodshed.

And finally, with fascism on the rise across the globe, a strong and effective left-wing is our only hope of avoiding catastrophe, and at the moment, we are tragically far from meeting the challenge.

If you have read this far and are already forming defensive judgements, I implore you to keep an open mind and read on. Below I will very briefly note some of the most alarming behaviours I see on the left:

Condemning the smallest infraction with the same intensity as the most grievous violation. Being insensitive and ignorant in matters of race, gender, and sexuality is undesirable, but is categorically different from hate. When theft receives the same capital punishment as murder, we remove the disincentive for a thief to become a murderer.

Ignoring intention. As a Jew, I have experienced innumerable hurtful interactions that we often call “microaggressions”. Except that “aggression” implies intention, and often the malicious intention simply wasn’t there. If someone is being careless about where they walk and as a result they step on my toes, it is fair to be angry at the pain that their carelessness caused me. But to accuse them of deliberate aggression is unfair and will only make them defensive – and rightly so.

Equating victimhood with righteousness. If we want to redefine racism as necessarily including a power differential, fair enough. But in practice what this often means, is that unacceptable behaviour on the part of an oppressed minority goes uncriticised. As much as I was appalled at the offensive remark that a Jewish acquaintance once made about non-Jews, I was even more horrified that a mutual friend defended them, saying: “It’s okay because she has suffered a lot of oppression.” Beyond the obvious double standard here, I also find this incredibly patronising, as if our suffering leaves us unable to tell right from wrong.

Evaluating others based on their identity rather than on the merits of their ideas. How many of us progressives in the last presidential election supported Hillary Clinton over Bernie Sanders, the latter of whom much better represented our progressive values, simply because we didn’t want “another old white guy”? Tragically, head to head polls showed that Bernie would have had much better odds to beat Trump.

An indifference to the suffering of people who are designated as privileged. #JewishPrivilege was a despicable social media campaign carried out by white supremacists that ignores the oppressions of Jews. But the fundamental logic they used, that any group with perceived privilege deserves contempt, is all too familiar on the left today. If we see compassion and kindness as conditional on oppressed status, then we have already lost the battle of ideas.

Not distinguishing between understanding and endorsing. The causes of right-wing extremism are complex and variable, but not necessarily beyond comprehension. Often beneath the hatred lies a legitimate grievance that has gone unaddressed and so is left ripe for exploitation by a cynical demagogue. Not only is it possible for us to understand a hateful person’s point of view without agreeing with it, it is absolutely necessary if we want to have any chance of making change.

Categorising others as either with us or against us. This one is particularly personal to me as I recently had a falling out with a friend who determined that because I don’t share their specific approach to social justice, I must be neo-liberal despite my insistence that I am vehemently opposed to neo-liberalism. This friend is not lacking in intelligence, education, or good judgement, but rather, like many of us on the left, has been seduced by a highly reductive world view that demands moral purity.

Across the globe, the looming spectre of fascism has come roaring back, and I know first-hand the fatal consequences of such an ideology. But what should truly alarm us all is the left’s failure to effectively push back against this rising tide, and its counterproductive methods to do so.

The author, who has asked to remain anonymous, is a Jewish American filmmaker with an academic background in history and politics. Formerly based in London, they have lived in Berlin since 2019.

Rugby and Daventry Radio Station Midlands UK > News > National And International News > Huffpost > One Year Ago, I Survived The Halle Synagogue Terror Attack. Here’s Why I’m Worried About the Left