An advert for a car leasing company has been banned by the UK’s advertising watchdog for being socially irresponsible and “likely to cause serious offence” on the grounds of race.

The advert, which appears in the form of a Facebook post, was shared by car leasing company LingsCars.com on June 16. It features the phrase: “Black cars matter. I asked Holly for a headline for this A4… and she said: ‘Once you go black, you never go back!’”

Below the text is an image of a raised fist with a wristband displaying the Audi logo alongside an image of a black Audi car. Text states: “Audi A4 black power edition” and “Manual gearbox (big gearknob)”.

Three people complained about the post, saying the claims ‘black cars matter’ and use of the phrase ‘Once you go black, you never go back’ alongside the image of the raised fist were insensitive and offensive. They challenged whether the advert was likely to cause serious offence and was socially irresponsible.

The Advertising Standards Authority (ASA) has since ruled that the advert should be removed and not appear in its current form again. However it is yet to be taken down. 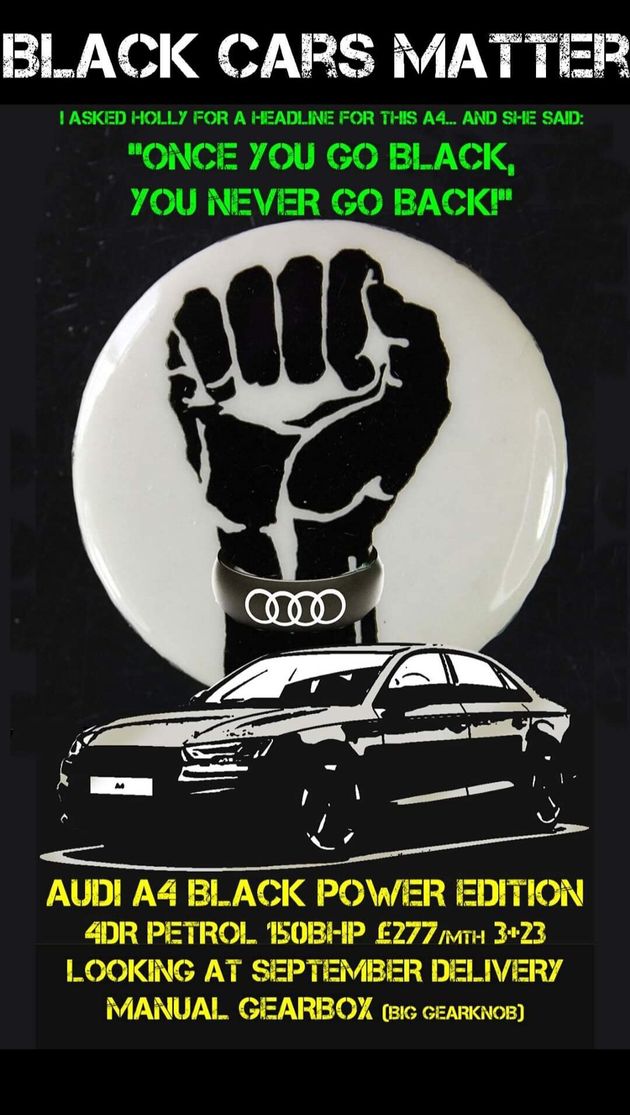 When asked to provide a response to the complaints, LingsCars.com – founded by Ling Valentine – stood by its advert, saying ‘black cars matter’ was inoffensive.

It said the phrase was a pun on the launch of the new car, the Audi “Black Edition”, and that “Once you go black, you never go back” was a well-known phrase that would not be offensive to Black people.

The company, based in Newcastle Upon Tyne, said the image of the raised fist was the symbol of the ‘Black Power’ movement and argued it was a positive symbol and was not seen as offensive in other contexts, such as the recent Grand Prix where Lewis Hamilton raised his fist.

The ASA noted how the ad appeared shortly after the Black Lives Matter protests and during a public debate about racism in the UK. “We considered that people would understand the headline ‘black cars matter’, the image of the raised fist and the name ‘Audi A4 Black Power Edition’ to be references to the Black Lives Matter and Black Power movements,” ASA said in a statement.

“By using that slogan and iconography simply to draw attention to an ad for a car had the effect of trivialising the serious issues raised by those movements.”

ASA added that the claim, “Once you go black, you never go back!” in addition to the reference to a “big gearknob” was likely to be seen as objectifying and fetishising black men.

“Because those claims, particularly in the context of an ad for an unrelated product alongside references to recent protests opposing racism against Black people, were likely to cause serious offence on the grounds of race, we considered the ad was socially irresponsible,” it said.

Lingscars.com Ltd has been told to remove the ad and it must not appear again in its current form.

Ling Valentine, who runs LingsCars.com, has made headlines previously for the design of her website – as the Independent wrote in 2016: “Its aesthetic can best be described as late-’90s GeoCities page, designed by a disgraced clown after ingesting a pillowcase full of LSD” – as well as a publicity stunt which saw her buy a nuclear rocket truck with her company’s name on the side, which she parked along the motorway.

In a Q&A published on the ‘about me’ section of the company’s website, Valentine writes: “Racism never bothers me, and it’s very rare, or maybe I never notice it. I really can’t understand people that are so politically correct that they think you don’t have a racial identity.”

A post shared on the LingsCars Facebook page after the Advertising Standards Authority (ASA) banned the advert, reads: “I can only respond by suggesting the ASA should have the ‘big gearknob’ shoved right up their arse.”

Here’s What You Need To Know About ‘Silent’ Covid