No, 90% Of Coronavirus Tests Are Not 'False Positives' And This Is Why - Rugby and Daventry Radio Station Midlands UK 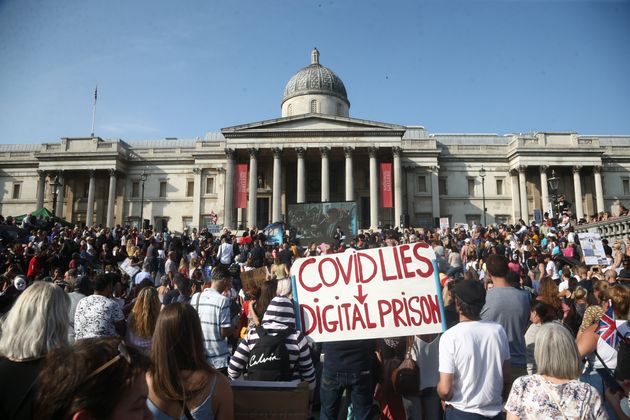 What at first seems like an incredibly alarming statistic has been circulating on social media, promoted by a small and vocal group of journalists – at least 91% of coronavirus tests in the UK are “false positives”.

If true, the implications would be staggering – the actual scale of the pandemic in the UK is less than a tenth of what we thought and the government has just announced further lockdown restrictions based on faulty data.

This claim has been seized upon by, among others, radio show host Julia Hartley-Brewer…

THIS IS VERY IMPORTANT: Matt Hancock told me on @talkRADIO that the False Positive Rate of Covid tests in the community is “under 1%”. Sounds good, doesn’t it? WRONG!
An FPR of 0.8% when the virus prevalence is so low means that at least 91% of “Covid cases” are FALSE POSITIVES. https://t.co/f2Z85Lj4cj

Journalist Toby Young, who in an article said health secretary Matt Hancock was “keeping this knowledge from the public for nefarious reasons”…

If Whitty and Vallance had taken questions, I hope someone would have asked them what the projected number of cases would be on 13th Oct if you discount the 91% of “cases” that are false positives. I make it 4,410. pic.twitter.com/qyyAFXCj4P

And even a Tory MP…

The government advisers today need to tell us how they are going to stop false test results distorting the figures. How are they going to calculate an accurate R Number? Data needs improving to improve decisions.

But there’s one problem – it’s simply not true.

So where did it come from?

Back in July, professor Carl Heneghan, director for the centre of evidence-based medicine at Oxford University and outspoken critic of the current UK response to the pandemic, wrote a piece titled: “How many Covid diagnoses are false positives?”

This article explains, in a nutshell, how tests cannot be 100% accurate and therefore there is a certain margin of error in the results.

Heneghan is particularly interested in “false positives” – those people who test positive for Covid-19 but actually aren’t infected. Health secretary Matt Hancock has said the false positive rate (FPR) for coronavirus tests is “less than 1%”.

But Heneghan has argued that due to a bit of a fluke involving some slightly complicated statistics, this FPR in the UK could be as high as 50%.

This theme was then taken up by Dr Michael Yeadon, who in a blog post argued the FPR was actually “around 90%”.

It was this blog and the claim therein that was picked up by Hartley-Brewer and Co.

Yes, but only in a statistical sense. Applied to the real-world, the conclusions don’t stand up and are wildly misleading.

Well, forgive us but to explain that we need to outline some of those slightly complicated statistics we mentioned earlier.

There are two key terms you need to be familiar with – “test sensitivity” and “test specificity”.

Test specificity is the proportion of people without coronavirus who have a negative test and is a measure of how good it is at avoiding false positives.

The test specificity for coronavirus tests is extremely high and we can work it out from the FPR rate.

We don’t know the actual FPR as we simply don’t have all the data required to work it out just yet. But the “under 1%” from Hancock is the figure used by those mentioned above to reach their conclusions and accuse the government of misinterpreting the figures.

So if the FPR rate is “under 1%” then the test specificity must be at least 99%.

(This actually means cases are being underreported but that’s not the main concern of this article so we’ll leave it at that.)

The prevalence simply refers to how widespread the infection is in the general population.

The latest estimate from the Office for National Statistics suggests even though it is rising, only 0.11% of the population are currently infected with coronavirus based on positive test results.

(There is of course the issue of false negatives here but a high number of these would mean the pandemic is even larger than feared but as this isn’t what people are claiming, we’re going to ignore this as well).

Every journalist and MP should be asking the PM & Health Secretary: why are we using a Covid-19 test that has 90% false positives?
Read this by ⁦@MichaelYeadon3⁩:
Lies, Damned Lies and Health Statistics – the Deadly Danger of False Positives. https://t.co/ibNK0Yt7G5

How does it skew the data?

At this point we hand over to Sam Watson, senior lecturer at Birmingham University, who told HuffPost UK: “Imagine 1,000 people turn up to the testing centre, and only one person has Covid. That one person has a positive test.

“Of the remaining 999 people, if the FPR is 1%, then you’ll get another nine positive tests from these 999

The lovely people at The BMJ created this interactive chart where you can see how this works – it only uses a sample size of 100 but if you set the test sensitivity to 80, round up the prevalence rate (pre-test probability) to 1 and the test specificity down to 99, you’ll see for every one true positive you get one false positive.

This gives the 50% FPR figure that Heneghan cites and if we could set the prevalence to 0.11%, we would get the 90% figure cited by Yeadon.

Both Yeadon and Heneghan, and in turn Hartley-Brewer, Toby Young and John Redwood, make one huge assumption – that the prevalence of coronavirus in the population tested is 0.11% like the ONS has said.

But this is not representative of the population that is actually being tested and whose results make up the material presented by the government and scientists of evidence of a second wave.

The ONS figure is based on a weekly survey of households representative of the UK as a whole, while the evidence of a second wave is based on tests on people who have sought one out.

Watson HuffPost UK: “If you took the UK population as a whole and randomly picked one person out of it, the probability of them having Covid is actually very low at it has a reasonably low prevalence.

“But if you turn up to a testing centre you’re already thinking: ‘I might have Covid’ and if you turn up with a cough and a fever then it’s probably quite a high probability that you have Covid.”

Let’s return to our interactive chart –  like before, set the test sensitivity to 80 and the specificity to 99, but this time play around with the pre-test probability.

As you can see, tiny changes have a massive effect.

Even if – as Hancock has said – a lot of people are getting tests without symptoms, if just one in five of those being tested are likely to have coronavirus because they have symptoms, the number of true positives dwarfs the false positives 16 to 1.

If just half of them have symptoms, in a sample of 100 people the number of false positives is so small it doesn’t even show up.

But this is all irrelevant anyway.

Because we know rising positive cases aren’t due to false positives for a couple of other reasons.

Positive test rates are going up as a percentage of total tests – this is not disputed. 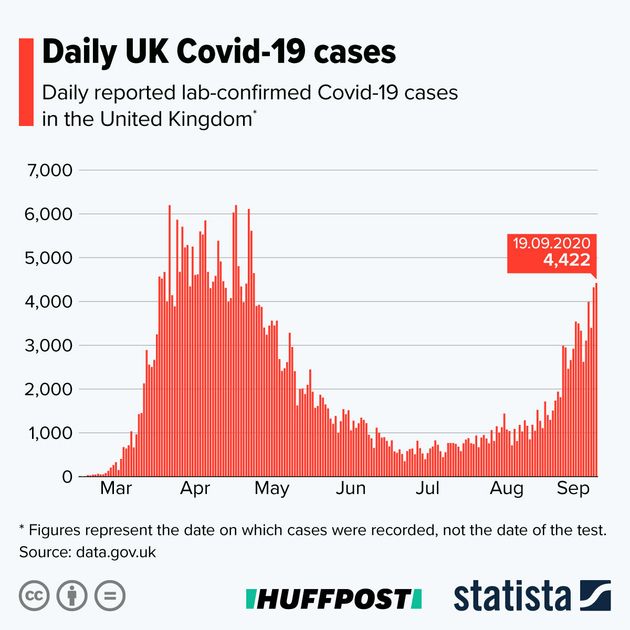 But this can’t be because of an increase in false positives as the rate of false positives remains constant unless the actual method of testing changes, which it hasn’t.

Additionally, if false positives were causing the spike in numbers, it would be uniform across the UK and it isn’t. 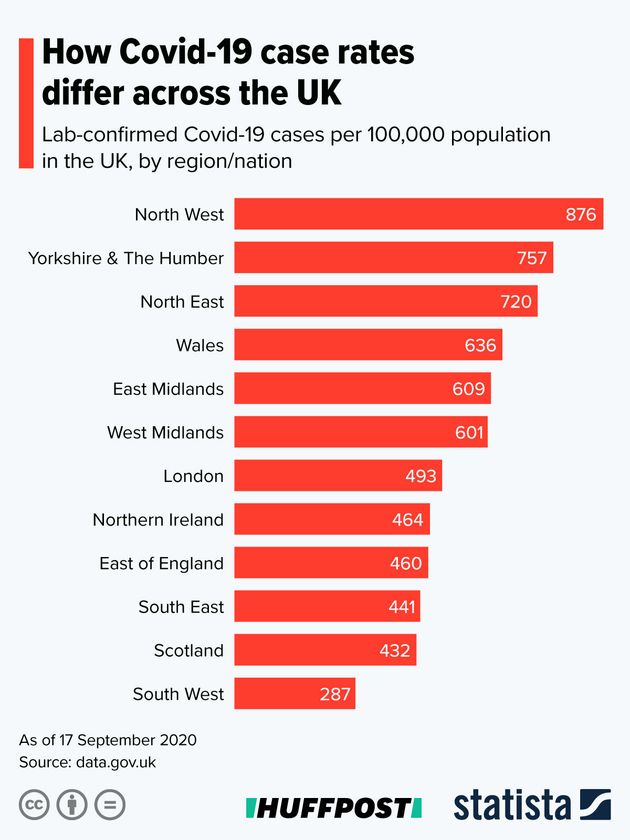 Hospital admissions due to coronavirus are at their highest levels since June. You do not go to hospital with a severe case of the false positives.

Why is this important?

We’ll hand over to Dr Dominic Pimenta for this one, who told HuffPost UK: “What’s really dangerous here is eroding the trust in the test and trace system, based on supposition, and this is then amplified to negatively effect public behaviour at at time when that is crucially needed to control cases and prevent more deaths and worse restrictions.”

And finally – the big question

Finally, there’s the elephant in the room – why exactly would the government actually want a second lockdown that would likely finish off the UK economy and negatively impact millions of people even if they don’t have Covid?

Even Hartley-Brewer is stumped…

Ok, so many of us accept that the data being used to convince us to go back into some kind of lockdown is dodgy as hell… But WHY, when the data doesn’t predict a deadly second wave, would the Government want to pretend that it does? This is the bit I can’t work out. 1/

Rugby and Daventry Radio Station Midlands UK > News > National And International News > Huffpost > No, 90% Of Coronavirus Tests Are Not ‘False Positives’ And This Is Why