From ‘Nigel Farage to be stripped of his EU Pension’ to ‘Nigel Farage must be involved in the Brexit negotiations’, the lead Brexiteer has been the subject of a petition or two in his time.

But a new petition focuses on permanently associating Farage’s name with one of the most unpopular unintended consequences of the UK’s departure from the EU.

Hundreds of people have already signed a petition, set up yesterday, to name a post-Brexit lorry park in Ashford, Kent – soon set to hold up to 1,700 vehicles in a bid to avoid huge queues on the M20 – after Farage himself.

By early Friday morning, the petition had reached more than 2,000 signatures.

Addressed to Kent County Council, the petition states: “It is fitting that every lorry driver, every commuter and every local resident has a chance to link this fine example of civil engineering to its true hero.”

It continues: “It maybe that Mr Farage will be unable or unwilling to attend the unveiling of this great honour that we do him but that shouldn’t get in the way of seeing his name and huge gurn plastered all over the boundary fence.”

May it be forever known as the #FarageGaragepic.twitter.com/IaKPMga7Lz

Potential chaos on the M20 through Kent due to customs delays at the Channel crossing has been a key point of contention throughout the Brexit process, with preparations becoming increasingly urgent as the UK gears up to leave EU regulations behind on January 4.

The government’s Operation Yellowhammer documents, which assess the potential implications of a no-deal Brexit and were made public in 2019, state that in a worst-case scenario it could take lorries up to two-and-a-half days before being able to cross into France. 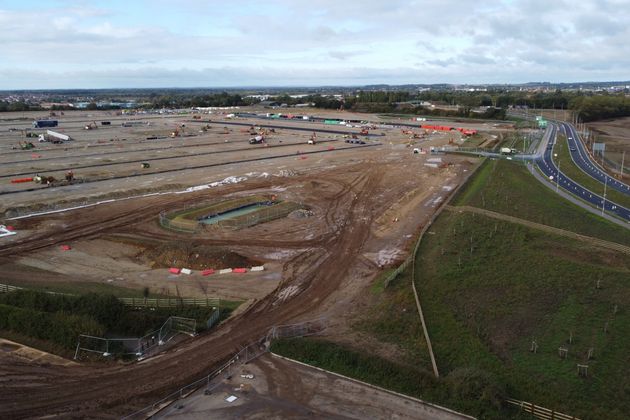 It emerged on Thursday that portable toilets could be installed alongside roads in Kent in case lorry drivers get stuck in congestion – a week after the Government confirmed that lorry drivers using the Channel crossings will need an access permit to enter the county following the end of the transition period.

The huge site in Ashford has also become the topic of renewed anger after a public consultation was released on the plans, four months after work began.

In September two coronavirus testing centres in Ebbsfleet and Portsmouth were “shut down overnight” to make way for lorry parks – prompting accusations from regional leaders that government had made the move without informing local authorities.

5 Fibs You Were Told This Week About Coronavirus, Test And Trace, And Cornish Pasties