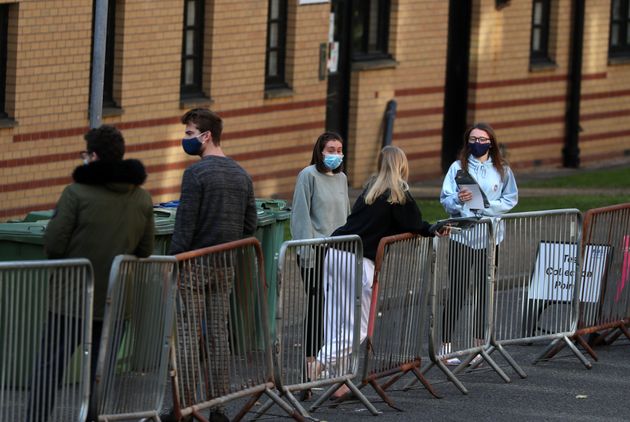 More than 7,200 university students and staff have been reported as testing positive for coronavirus in recent days, bolstering calls to let them go home without being liable for rent.

The figures come as thousands of students are being forced to self-isolate miles away from their friends and families in efforts to contain the spread of the virus.

Several universities have switched to online teaching and are providing support in the form of delivering food parcels and medication, and loaning laptops and other equipment.

While there are no official lists of infections at higher education institutions, many universities are publishing the figures themselves. As they are self-reported, the true number is likely to be higher.

UCU regional official Iain Owens said: “The huge rise in the number of students with Covid-19 makes the efforts by universities minister Michelle Donelan to downplay the seriousness of the outbreak even more staggering.

“It is time for the government to take a serious grip of the crisis, properly support students, and provide a coordinated plan to allow all them to return home if they wish once it is safe to do so.”

Universities minister Michelle Donelan was criticised after her comments about coronavirus figures for Northumbria University at a House of Commons education committee meeting on Tuesday.

Labour MP Apsana Begum made reference to the 770 students that Northumbria University confirmed had tested positive for Covid-19 as of October 2, describing it as a “really big outbreak”.

While Donelan acknowledged it was “challenging for students involved”, she claimed the figure had been misreported in the media. She said: “That figure was actually those who had obtained Covid, contracted Covid from August, not over the weekend or the last few days, and it also included their London campus and their campus in Amsterdam as well. So the real number was only just over 200.”

In response to the increasing COVID-19 infection rate in Newcastle & the impact this is having on our community, we’re temporarily delivering all teaching online from tomorrow for an initial 3 week period with a review on 23rd October https://t.co/rUgFtbJ4wFpic.twitter.com/EcNSZBdG7g

However, a spokesperson for Northumbria University confirmed to Research Professional News that all 770 of the cases reported by the university on October 2 related to students at its Newcastle campus – and did not include anyone at its London or Amsterdam outposts.

A statement on the university’s website says the figure represents the “cumulative number of students who have reported testing positive since they started to return to university for the start of term in mid-September”, meaning it does not include all individuals who had contracted Covid-19 since August as the minister suggested.

On Friday a university spokesperson said: “These students are all now self-isolating. Their flatmates and any close contacts are also self-isolating for 14 days in line with government guidance, and have been advised to contact NHS119 to book a test as soon as possible should symptoms appear. Those affected live in different student and non-student accommodation.

“We have put in place a self-reporting system to openly encourage staff and students to self-identify if they have been tested positive, and to report if they and their close contacts need to self-isolate. This approach is part of our overall plan to proactively and positively manage the health, wellbeing and safety of our staff and students, and deliver a safe campus experience.”

Around 64 universities across the UK have had at least one confirmed case of Covid-19, analysis of university responses and media reports by the Press Association suggests.

One lecturer, who asked not to be named, told the news agency: “I feel heartily sorry for the students.

“I suspect not all but many are getting nothing, and probably less, out of their uni experience than they would in the relative safety of their homes.

“After all, who could have predicted that bringing thousands of people together from all over the country, and other countries, in confined spaces would not risk an explosion in infections?

“It was sheer lunacy and a lot of staff are angry about it, and not just because of how it affects them.”

Nottingham University was under fire this week over a leaked email to all staff asking them to “deprioritise” current work, volunteer as online contact centre advisers and provide assistance in student halls.

A spokesperson from the university told HuffPost UK: “The university is setting up a new contact centre, in addition to our existing helplines and information, to support students, parents and staff with advice about our measures to support and protect them.

“We are asking for staff volunteers, who will know our community best, to help out where and if their other duties allow. We recognise that all of our colleagues are doing incredibly busy jobs and are grateful to those who can spare the time to help.”

Last month, Nicola Dandridge – chief executive of the Office for Students (OfS), the higher education regulator in England – said it would be “looking very closely” at the quality of education being provided by institutions.

Speaking to BBC Radio 4’s Today programme, she said institutions must be clear with students on what teaching conditions they can expect and if this changed.

“What we can’t have is a situation where students don’t know what’s going on, that they’re locked in their halls of accommodation, and can’t get hold of food,” she said.

She said students had “legal rights as consumers” and could raise complaints with their university and the Office of the Independent Adjudicator.

Asked if students should receive a refund of tuition fees she said it was “a question for government”.

But Johnson’s spokesperson said: “Universities are autonomous and they set their own fees.

“What we would expect is that they continue to deliver a high quality curriculum to their students.”