Five Manchester MPs are revolting against plans by Boris Johnson to place the city under the toughest local lockdown measures, including pub and restaurant closures.

The prime minister is due to set out a new three-tier approach to local lockdowns on Monday, with Manchester potentially in line for the toughest coronavirus restrictions in tier-3, which will include blanket hospitality closures.

But in a letter to Johnson and chancellor Rishi Sunak, reported by ITV News, the MPs wrote: “We are concerned that closing all regulated premises will not only lead to gatherings being pushed underground, but won’t have a sizeable effect on virus transmission rates.

“Yet, as you are well aware, would have a devastating impact on jobs, livelihoods and businesses in our area.

“We would not support Manchester being put in tier 3 on this basis.”

They say data “would not seem to support a rationale” for closing pubs and restaurants. Large proportion of the spread is among students & in private homes. Hospitality a “very small proportion” of infections. pic.twitter.com/TMYxQmfTYB

The city has for several weeks already been under a local lockdown which prevents households from mixing, but has still seen cases rise.

The five Labour MPs questioned officials’ insistence that hospitality accounts for a large proportion of Covid-19 transmission, arguing instead that the majority of infections are happening in “household settings”.

Data presented to 149 MPs from the north and Midlands by England’s chief medical officer Chris Whitty suggested hospitality accounts for 30% of “common exposure settings” for coronavirus.

But it has been criticised as relying on a small sample size, with backing from a study based on data from the United States. 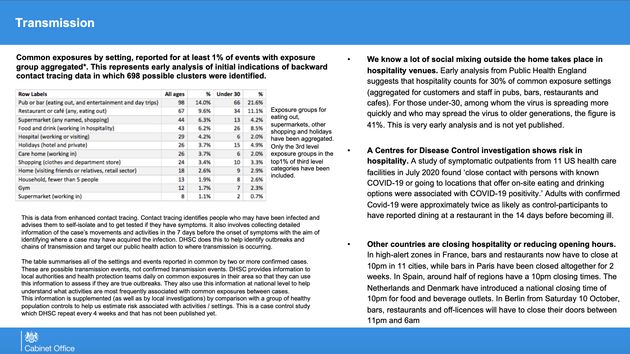 The MPs – Lucy Powell, Jeff Smith, Mike Kane, Afzal Khan and Graham Stringer – wrote:  “The data on where infections are occurring would not seem to support a rationale for your proposed measures.

“As you will know a large proportion of our recent increase in infections are amongst our student population, now being managed in confined ‘households’ mostly in halls of residence.

“Indeed, many of these were asymptomatic and were only picked up because of (locally delivered) mass testing.

“We were assured in parliament this week that confined outbreaks would not be a reason for tighter restrictions for the wider population.

“Beyond the student population the majority of transmissions are still occurring in household settings.

“Manchester has put forward thorough proposals for tracking this through local, intense track and trace alongside well-resourced door-to-door activity able to communicate the guidance effectively.

“This would need to sit with the economic support available for people to self isolate.

“Transmission in hospitality settings, as you know, constitutes a very small proportion of infection rates.

“Nonetheless Manchester authorities want the powers to quickly sanction and close individual premises not complying with the safety guidance.

“We are concerned that closing all regulated premises will not only lead to gatherings being pushed underground, but won’t have a sizeable effect on virus transmission rates.

“Yet, as you are well aware, would have a devastating impact on jobs,  livelihoods and businesses in our area.

“We would not support Manchester being put in tier 3 on this basis.”