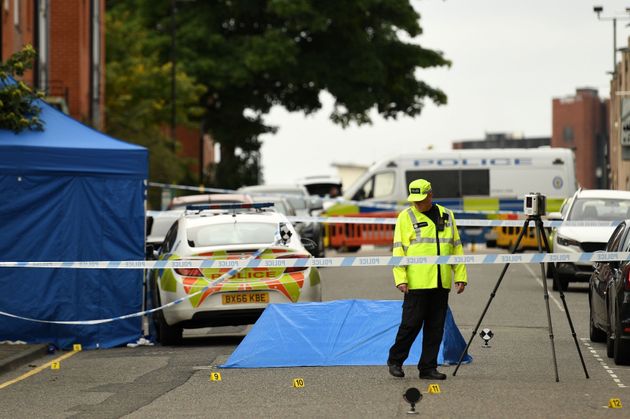 A man has died and seven people left seriously injured after multiple people were stabbed in the city centre in the early hours of Sunday morning.

Police confirmed that two people, a man and a woman, had also been seriously injured during the incident, to which police were called at around 12.30am on Sunday morning.

A spokesperson for West Midlands Police said officers were still working to identify and locate one suspect, with victims believed to have been chosen at random.

Chief superintendent Steve Graham, who is responsible for policing in Birmingham, said there is “absolutely no suggestion at all that this is terror related”.

A police statement said: “We can now confirm that we’ve launched a murder investigation following the events in Birmingham city centre overnight.

“A man has tragically died. Another man and a woman have suffered serious injuries and five others have also been injured, although their injuries are not thought to be life-threatening.

“We believe the incidents, which took place between 12.30am and 2.20am, are linked and we’re doing all we can to find whoever was responsible.”

Graham said: “The events during the early hours of this morning are tragic, shocking and understandably frightening.

“Please be assured that we are doing absolutely everything we can to find whoever was responsible and try to understand what exactly happened.

“We have well-rehearsed plans for dealing with major incidents. Your safety is always our priority and that’s why you’ll see an increase in officers on the streets.

“In the meantime, we’d ask anyone who’s in the city to remain vigilant and report anything suspicious to us.”

He added that the stabbings overnight were believed to have been linked, with police searching for one suspect.

He told reporters officers were called to reports of a stabbing in Constitution Hill, north of the city centre, and the suspect worked north-to-south.

He said: “We are still in the early stages of that inquiry but I can say that we are treating all four of those incidents as a linked series.

“We are searching for one suspect and inquiries to identify and then trace that suspect are ongoing.”

Graham also confirmed there was “absolutely no suggestion” guns were involved in the incident.

One witness, Cara, told BBC Radio Five Live she thought it was “one group of boys against another group of boys”, adding that she had heard racial slurs during one incident.

She said: “They were not just having an argument and then fighting, it was straight into fists being thrown. There was not much talking going on.

“Drinks were being dropped, bottles that they had obviously bought in the club, rings were falling off so jewellery was going everywhere, clothes were being torn.

“One of the males actually ended up with his hair being pulled out and left with a bald patch.

Speaking to Andrew Marr on BBC One foreign secretary Dominic Raab said: “We know it’s a very serious incident. Our thoughts and prayers are with the victims and their families.

“I think at this point in time we don’t know too much more than that other than to say the public should be very vigilant.”