By the time she stepped onto the red carpet at the VMAs in 2010, Lady Gaga was already one of the most recognisable people on the planet, famous for her show-stopping performances, outrageous interviews and game-changing pop tunes.

Another reason Gaga was almost permanently in the headlines during that time was her outlandish fashion choices, and that year’s Video Music Awards saw her stepping out in what was probably her most iconic outfit to date… the meat dress.

It’s now been 10 years since Gaga first donned the infamous dress, and it’s gone down in pop history as one of the most recognisable outfits of all time.

But how much do we really know about the controversial ensemble that got the whole world talking? 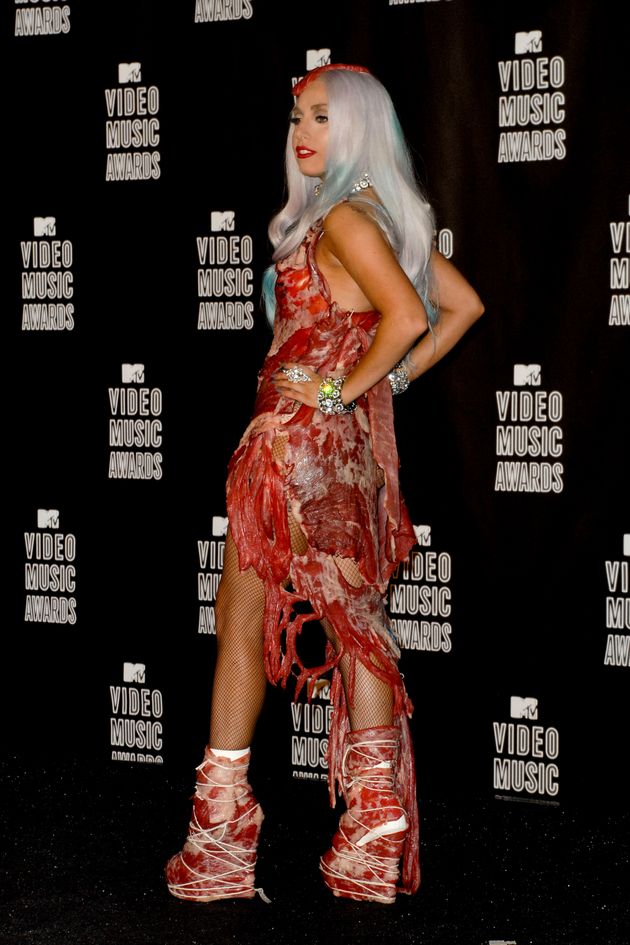 To mark the 10-year anniversary of Gaga’s meat dress, here are 15 facts about its history and its creation, as well as its legacy…

1. The dress was designed by Franc Fernandez, who has also worked with Scissor Sisters and Beyoncé

Before the meat dress took the world by storm, Franc’s biggest credit was designing one of the most famous outfits in Gaga’s Bad Romance music video – which she collected Video Of The Year for in 2010. 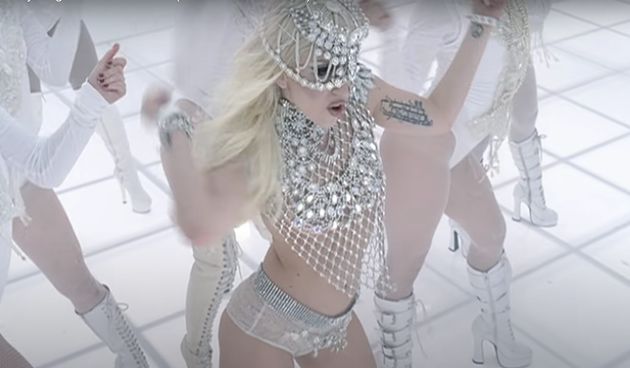 2. Seriously, how much of it was actually made of meat?

The whole thing. The dress, bag and even Gaga’s teenie little beret were all made from Argentinian beef, bought from the go-to butcher of Franc Fernandez (who originally hails from Argentina) in Los Angeles.

3. Because of the material, there was no time for an actual fitting, so the first time Gaga put it on her body was actually at the VMAs

Franc told HuffPost shortly after the VMAs: “We didn’t get a chance to have a fitting. The only time she had it on was for the VMAs. Only when I saw it in the monitor did I know it would be big.”

In fact, Gaga didn’t even arrive at the event wearing the meat dress, but changed into it during the ceremony. 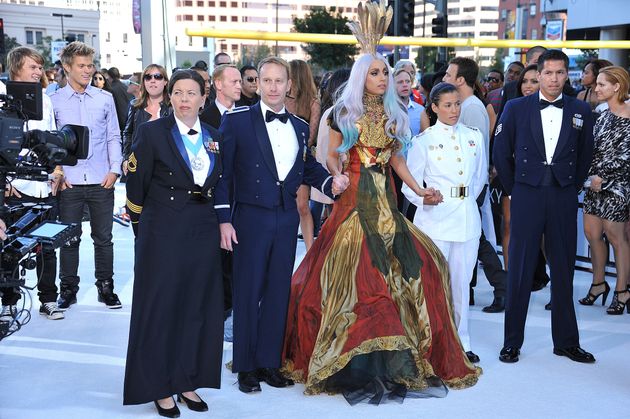 4. Gaga’s intention behind the meat dress was to make a political statement

The meat dress was intended as Gaga’s protest against the US military’s Don’t Ask, Don’t Tell policy on sexuality, which was still in effect in 2010. Prior to changing into the meat dress, the singer walked the red carpet with gay veterans as her guests.

She later told Ellen DeGeneres: “If we don’t stand up for what we believe in and if we don’t fight for our rights… pretty soon we’re going to have as much rights as the meat on our bones.”

5. The meat dress got plenty of attention from the celebs in attendance at the VMAs that year 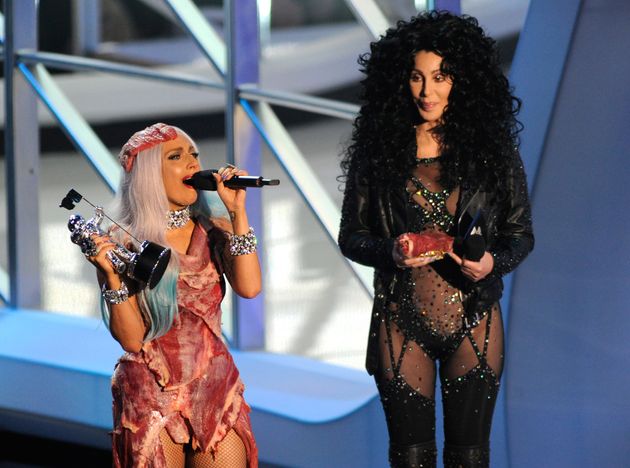 Gaga collected her Video Of The Year award from Cher, commenting on stage: “I never thought I’d be asking Cher to hold my meat purse.

We have to say, we’re big fans of this iconic photo of Gaga with a then-burgeoning Drake, in the audience, too.

6. The 2010 VMAs was a big night for Little Monsters – and not just because of the meat dress

Not only did Gaga steal the show on the red carpet, Gaga took home eight awards on the night, for her Bad Romance and Telephone music videos, including the awards show’s top prize, Video Of The Year.

After being awarded Video Of The Year, she announced her then-upcoming album would be called Born This Way, and performed a short – but still ever so slightly awkward – acapella blast of the title track during her acceptance speech.

“Gaga said it smelled good,” the designer told MTV. “It had a sweet smell.”

He added: “It hadn’t been sitting out for more than five hours. And it’s not a heavy gross meat.”

8. The dress also had its own unusual method of transportation to keep it fresh

“I had a little cooler that I carried it in,” Franc Fernandez later said. “Its own little coffin.”

Franc said after the VMAs: “While it was being made it was refrigerated, [worked on] and then refrigerated [again]. It took a span of two days on and off. Maybe three with sourcing and getting materials and everything.”

9. Gaga followed the VMAs by recording an interview with Ellen DeGeneres, still wearing the meat dress

This was only the second time that Gaga wore the meat dress, something which Ellen – a devout vegan – made no secret of her discomfort about.

At the end of the interview, Ellen presented her guest with a bikini made out of vegetables, which curiously enough, we never actually saw Gaga trying on.

10. And unsurprisingly, the animal rights activists over at Peta were less than impressed with the meat dress

They said: “In her line of business, Lady Gaga has a hard time being ‘over the top’, and wearing a dress made from cuts of dead cows is offensive enough to bring comment, but someone should whisper in her ear that there are more people upset by butchery than impressed by it – and that means a lot of young people will not be buying her records if she keeps it up.

“Meat is the decomposing flesh of an abused animal who didn’t want to die, and after being under the TV lights, it would smell like the rotting flesh that it is and likely be crawling with maggots – not too attractive, really.” 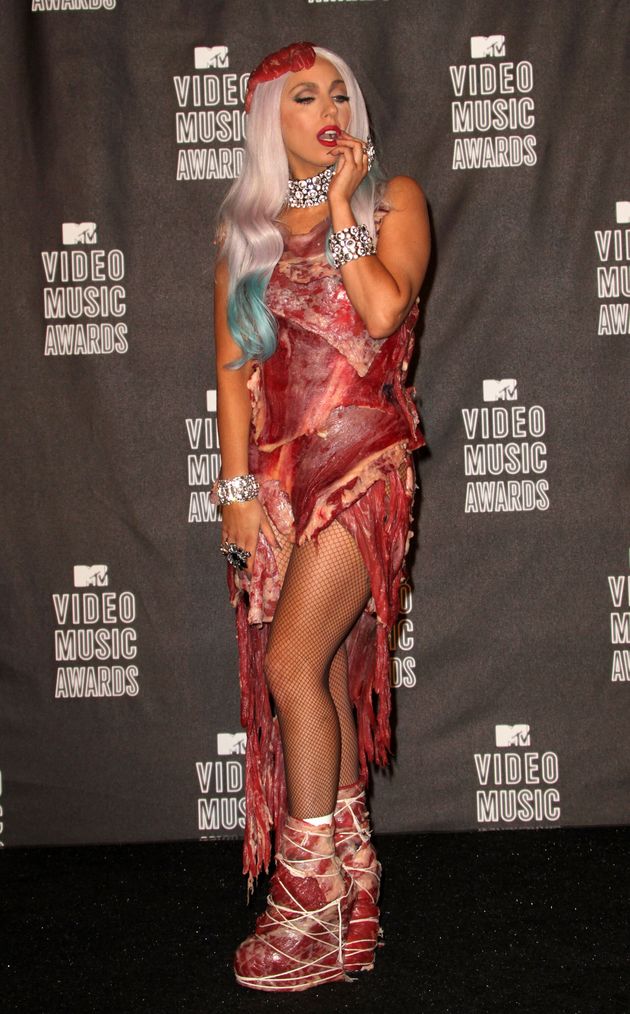 11. But despite Peta’s reaction, others were more taken with the meat dress

Days before walking the red carpet at the VMAs, Gaga unveiled her cover photo-shoot for Japanese Vogue, in which she was seen sporting a bikini made out of beef.

13. And she revisited the look on the Born This Way Ball tour

Although she’s not usually one for repeating herself, Gaga referenced the meat dress on her subsequent world tour, in support of her Born This Way album.

This time around, though, her outfit was made of fabric that had been designed to look like meat, which we imagine was a lot easier than lugging a load of beef around the globe with her.

14. The question is, where is the meat dress now?

Well, it’s in the Rock And Roll Hall Of Fame, where it was added to the exhibit Women Who Rock: Vision, Passion, Power, the year after it was first worn on the red carpet.

It does look a little different to when it was first photographed, though.

The Rock And Roll Hall Of Fame paid a taxidermist $6000 (£4690) to preserve the dress… although it did have to be painted to look more like meat than what it actually is now… jerky. 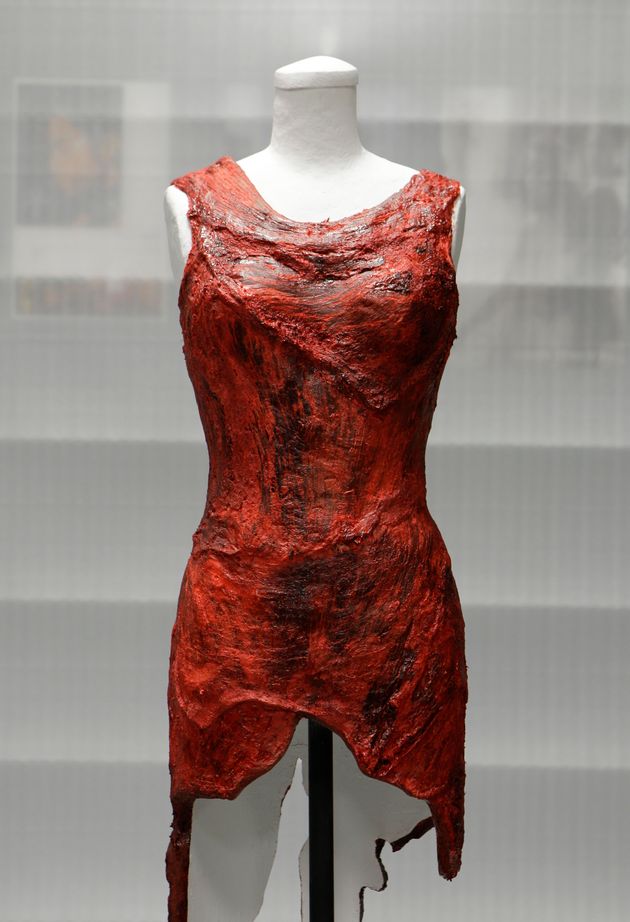 15. And how do you top the biggest fashion moment of your career?

A year after the meat dress, Gaga returned to the VMAs, where she was nominated for four awards, following the success of Born This Way.

This time around, though, she took a rather different approach with her fashion, walking the red carpet as her male alter-ego, Jo Calderone. Jo was first seen in a Japanese Vogue Hommes shoot (published the same month as that meat bikini) and Gaga stayed in character the whole night, including when she presented Britney Spears with her Video Vanguard award. 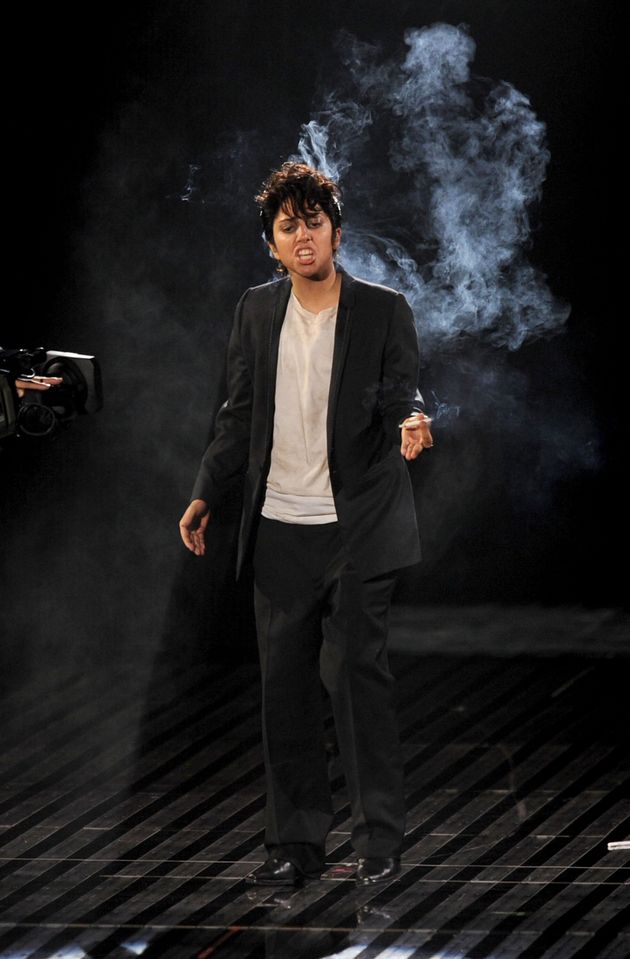 Gaga – or should we say Jo? – opened the show with a performance of her song Yoü And I, accompanied by Brian May on guitar.

Take a look at Gaga in action in the meat dress in the gallery below:

Mariah Carey Wants To Be In Mean Girls Sequel, Says She’ll Write A Song For It