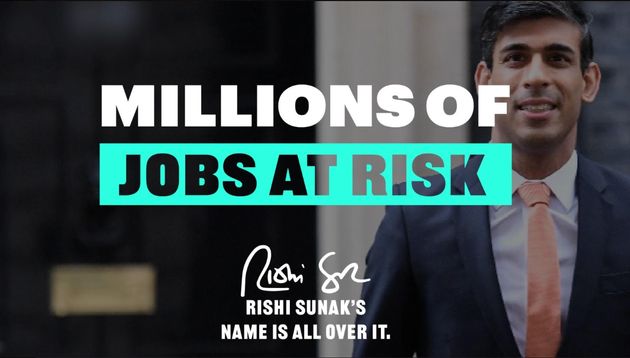 Labour is launching a series of attack ads that link chancellor Rishi Sunak’s personally signed tweets with the prospect of rising unemployment.

Titled “It’s Got His Name All Over It”, the Facebook campaign will from Wednesday target Tory seats which the Opposition claims are set to lose jobs because of a lack of targeted support from the government.

The party says that key sectors such as aviation, tourism and hospitality are at most risk from Sunak’s refusal to offer specific alternatives to his furlough scheme that is due to end next month.

The chancellor’s recent “Winter Economic Plan” set out new moves to subsidise the pay of workers who move to part-time hours, but critics have claimed that they fail to offer employers sufficient incentives to keep staff on.

Sunak began his signature tweets earlier this year, adding his autograph to various PR campaigns to highlight his jobs support plans, stamp duty and VAT cuts, and his “Eat Out To Help Out” discounts for restaurants in August.

But Labour estimates that more than half a million jobs are at risk in parliamentary seats that switched to the Tories in the general election last year.

Sunak raised eyebrows even among some Conservative backbenchers when he launched his branded social media posters in the summer, prompting suggestions that he was preparing a future leadership bid.

As our response to coronavirus adapts, tomorrow afternoon I will update the House of Commons on our plans to continue protecting jobs through the winter. pic.twitter.com/eP6aqcocxd

House sales rose 15.6% in August following the stamp duty holiday introduced in our Plan For Jobs.

This has helped to protect nearly three quarters of a million jobs in the housing sector and wider supply chain. Read the new figures out today: https://t.co/IFo4kN7Ezkpic.twitter.com/eVuihACHzn

Shadow chancellor Anneliese Dodds said: “Last week the Chancellor should have protected jobs with a proper work sharing scheme that incentivised employers to keep more staff on. Instead, he’s telling British business to start laying people off because no more help is coming.

“This wasn’t by accident – it was by design. The Chancellor’s sink or swim mentality is a throwback to the worst days of Thatcher, and just like in the 1980s people on the lowest incomes will pay the highest price.”

The Treasury has pointed out that it has pumped unprecedented amounts of money into saving jobs but that such levels of support cannot continue indefinitely and only “viable” jobs were likely to be saved.

Sunak said last week that he hoped that his new Job Support Scheme – where government will help top up part-time workers’ wages with employers to at least three-quarters of their full-time pay – would “benefit large numbers”.

Health minister Helen Whately said on Monday that “it doesn’t make sense to continue supporting jobs where there simply isn’t work at the moment”, a comment that led critics to suggest the government was abandoning sectors like hospitality.