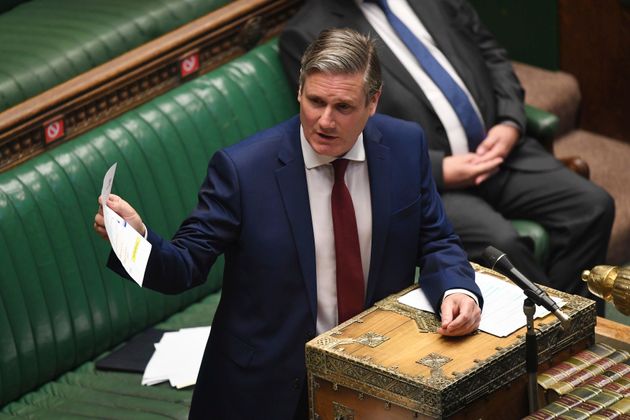 Keir Starmer has urged Boris Johnson to “get a deal” done on Brexit and focus all his energy on fighting coronavirus.

The Labour leader warned the prime minister not to “reopen old wounds” and to get a trade deal with the European Union secured in good time before the end of the year.

Starmer said getting a deal was “in the national interest” and “what the public want”, having been promised one by Johnson in the 2019 general election.

He also attacked as “wrong” any moves by the government to break its word on the Brexit agreement signed with Brussels earlier this year, after a cabinet minister admitted the UK would break international law.

During a series of broadcast interviews, Starmer told ITV News that Johnson should “concentrate” on achieving a deal and said it would be a “failure” if a free trade agreement wasn’t reached.

“Get on, negotiate, get the deal that was promised,” he said, adding: “If this ends up without a deal that will be a failure on the part of the government.”

Tory MPs have accused Starmer of being silent on Brexit because of his record in supporting a second referendum, with Labour seats falling to the Tories at the last election in the so-called “Red Wall” in the north and midlands.

But in his latest intervention, the Labour leader tried to use the PM’s “Get Brexit Done” promise against him, pointing out he needed to fulfil his pledge to the public.

He insisted negotiators have enough time to iron out any outstanding issues and come to a deal before the PM’s October 15 deadline, and stressed that coronavirus should be the priority.

“I don’t think the issues that are outstanding can’t be resolved, so let’s get a deal, move on, and focus on what the public are concerned about which is defeating this pandemic.”

‘Get a deal, move on, focus on the job in hand’

Labour leader @Keir_Starmer says any plan to override the Withdrawal Agreement is ‘wrong’ and urges @BorisJohnson to focus on getting a #Brexit deal so the UK can get back to fighting #coronavirushttps://t.co/8QW4IQHtXSpic.twitter.com/b9SOgAQpuq

He also ruled out any question of Labour backing an extension of the current negotiation deadline with Brussels.

“I don’t think there’s any need to extend the trade talks, there’s no talks of extending them,” he said, adding: “We’ve left the EU, there’s no question of a second referendum…the Leave/Remain argument is over.”

Starmer also told Channel 5 News: “What I would say to the government is don’t reopen old wounds, get a deal, move on and concentrate on defeating this virus.”

He criticised the plan to introduce new legislation overriding elements of the Withdrawal Agreement and suggested Johnson could be using the proposal as a distraction.

He told Sky News: “What the government is proposing is wrong, I think that’s plain for everybody to see. But we need to step back here and focus on getting a deal.

“There’s certainly a case to be made that this is all just being used as leverage in the negotiations and that’s wrong in principle.

“A deal can be struck in the next few weeks, the issues outstanding are not unsurmountable. To have no deal would be a failure of negotiation, a failure that has to be owned by the prime minister.”

He said he was not working with Conservative MPs riled by the proposal in order to table an amendment and block the move in a parliamentary manoeuvre.

He told Sky News: “I’ve not been talking cross-party on this issue because I’m very focused on the national interest which is getting a deal.”

The head of the Government Legal Department, Sir Jonathan Jones, resigned amid reports he was “very unhappy” with the proposal.

Starmer said he knew Sir Jonathan during his career as a lawyer, vouched for him as a professional and said he would not have resigned “lightly”.

He told Sky: “Jonathan is a first-class lawyer who has given excellent advice over the years and I’m absolutely sure he wouldn’t have done this lightly.

“I haven’t spoken to him but I have known him for many years.”