This is something you can’t makeup … or maybe you can?

With ongoing concerns about Donald Trump’s health following his Covid-19 diagnosis, the president made a video on Wednesday to show he’s doing well.

Though the video had various notable moments, including the president calling his diagnosis a “blessing from God”, Corden was struck by another curious aspect.

“Is it just me, or is Trump looking especially orange?” the Late Late Show host wondered, as he and Ian Karmel, co-head writer of the US talk show, broke into Oompa Loompa song parodies about the president.

James tried his best to listen to Trump’s message but kept getting distracted.

“I mean, look at the difference between the colour of his hands and the face,” he said, adding, “Who’s doing the makeup?”

“I think they’re like eight feet away with a fire hose applying it,” Ian then joked. 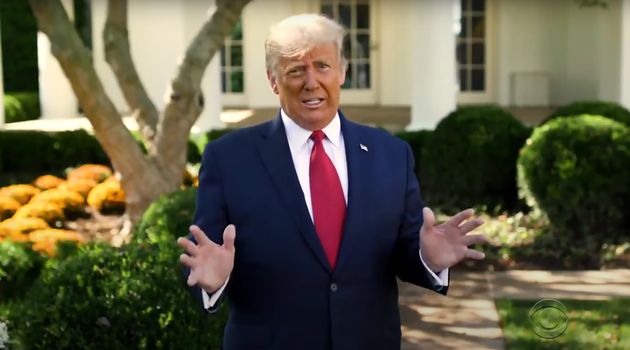 James just couldn’t get over the contrast between Trump’s hands and his face, which was so striking that he even compared it to his own makeup, leading the Late Late Show host to come to a startling revelation:

Dude’s got the same look.

“I mean, it’s not as bad, but it’s close,” James admitted, looking at his pale hands. “I mean, I’ll be honest. I regret going on this riff now because… I am in a glass house chucking some stones.”

Orange you glad you can watch the clip below?