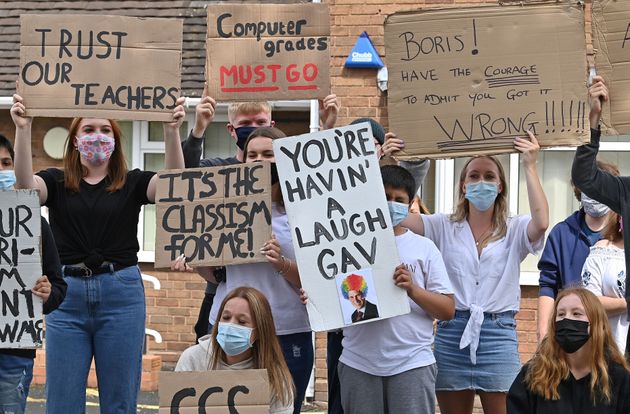 It takes a specific skillset to thrive in an admissions office at a university.

You need to possess a shedload of empathy, the hide of a rhinoceros and adaptability in the face of constantly changing priorities.

With over 10 years of admin experience behind me, I thought I’d seen it all. Then the A level results were released, and all hell broke loose.

I’m part of a team of eight who processes undergraduate entries to one of the most prestigious medical schools in the world.

We adjusted to working from home after an abrupt shutdown, which saw us locked out of buildings with barely time to collect our belongings.

We cobbled together home offices and carried on with dealing with a slew of admissions enquiries with guidelines which seemed to change hourly, not daily.

But none of that prepared us for the events of the past week.

I knew there would be an eventual U-turn. But that didn’t help us last week when we had to follow protocol and reject students who were screwed over by an algorithm, students who are now qualified for a place that’s been taken by someone else.

The emails and phone calls are unrelenting. As soon as I open my laptop at 9am, the ping of new mail starts and doesn’t stop until I log off.

I tried muting the sound, but I still hear it. I even hear it when I dream. Although official office hours are 9-5, I regularly stay on email until 9pm, scared to leave too many unanswered messages until the morning.

In the past few weeks, my team and I have fielded around 30,000 frantic emails and calls from students, parents and teachers.

Some are begging, some abusive and most tearful. We’ve had threats of legal action and several students have said they will harm themselves if they don’t gain access to the programme.

We escalate the most distressed students to a manager and I now include the details for the Samaritans in my email signature, in the hope that someone who needs it will seek help.

As soon as the A-level results were released, I knew there would be an eventual U-turn.

It seemed inevitable after the Scottish Government scrapped downgraded results. But that didn’t help us last week when we had to follow protocol and reject students who were screwed over by an algorithm, students who are now qualified for a place that’s been taken by someone else.

Being told by the government that we need to lift our cap on number is useless when there is only space on four undergraduate degree programmes out of the almost 400 the university offers.

There is no way to physically increase the quotas in the medical school, we simply don’t have the teaching staff, buildings and student housing to accommodate this.

Even if there was a massive financial injection it would be impossible to employ new lecturers and find more teaching space with less than five weeks until the start of semester.

It feels inevitable that one of us will have a complete breakdown with the stress of the job.

There’s a constant feeling our performance is being monitored and our team will be downsized if we’re deemed to be overstaffed.

Just last month, an all-staff email from our Principal outlined a series of cost cutting measures to mitigate the impact of Covid on university finances, including redundancies.

Agency staff that were holding departments together were terminated and zero-hours contractors were let go. We’re having to do the same job with fewer resources and it’s exhausting.

Admissions staff are almost at the bottom of the university food chain but are bearing the brunt of the government’s incompetence. Many of us would look for work elsewhere but feel trapped due to the economic uncertainty and current job market.

We stay because on a good day it’s an amazing job – you get to make people’s dreams to study a reality. But the bad days are outweighing the good just now.

It’s impossible to switch off from work, even at the weekends. I had to delete my profile picture from the university website as students and parents were tracking me down on social media and sliding into my DMs asking for help. I deleted my LinkedIn for the same reason.

Every member of my team has taken time off to deal with mental health issues in the past five months.

It feels inevitable that one of us will have a complete breakdown with the stress of the job.

I haven’t slept properly in a month. It’s impossible to settle my mind when I can still hear the phantom email notifications long after I’ve turned my laptop off for the day.

An algorithm may be to blame for the admissions chaos but remember, it’s humans having to clear up the mess.