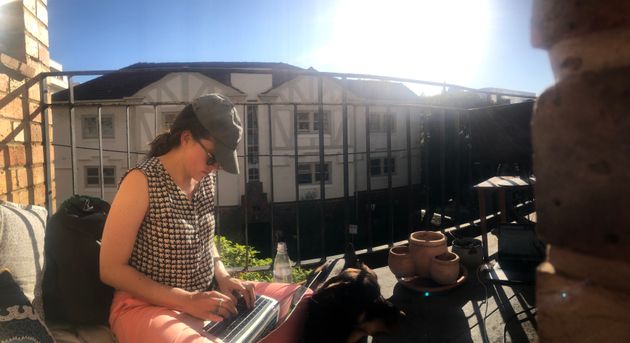 The cop car drove by slowly, with the window down. I whistled for my dog, Thor, then held my breath. He was off-leash. I was in my slippers and bathrobe, not wearing a mask and it was after 9pm. That was at least three finable offences in Melbourne, Australia.

Currently, the five million residents of Melbourne are in the ninth week of Stage 4 lockdown and the sixth month of stay-at-home orders. Some of these restrictions have begun to lift, but we have been one of the most locked-down places in the world for the longest amount of time. At the height of Stage 4 (the strictest level), only essential businesses were open and there were many finable offences, including but not limited to:

So, I held my breath, hoping to avoid one of those many fines. Maybe it was the slippers and giant Seahawks bathrobe or maybe the police were just patrolling, not keen to arrest anyone that night. Whatever the case, the car kept driving and I was off the hook. Lucky. Privileged, really.

As cliché as it is, as an American I’m “blessed” to be living here, with a stable job, incredibly loving partner, accessible workers’ rights, free Medicare, thousands of miles away from the overwhelming chaos, injustice and hurt in the United States.

Regardless, as the car drove on, the emotional wave hit me. Rising up through my body like a mean friend I’ve tried so hard to ignore, I stood on the street corner and sobbed. Just a few tears that time, but it’s been more, so much more. I miss home.

Throughout the last six months, the stages of lockdown in Melbourne have varied and with them so have my emotions. In March, it started similarly to the stay-at-home orders in the States.

Those of us who were fortunate enough to keep our jobs and not be directly affected by the virus were all spending time at home on Zoom in leggings and hoodies, swapping puzzles, hosting Zoom birthday parties, and baking homemade bagels. We obsessively read the news and collectively tried to figure this thing out. There were fines for traveling out of the city, and the borders to other states were closed. But we thought, “We can do this. The restrictions will only last until June.”

This is the part of the story that Americans also experienced. But then, the United States went in a very different direction and I was left wondering when I would ever make it home again.

By June, Melbournians “flattened the curve” with the number of new daily cases dropping to single digits (a feat the United States has yet to accomplish). Cafes, galleries and shops reopened with restricted capacities. The borders between states started to open as well. Now, sometimes I ask myself if that two-week period was a dream.

Then the second wave hit. Like an earthquake aftershock, this one felt heavier and harder than the first. This part of the Covid-19 Melbourne lockdown story is something no other Australian state has had to endure, much less any Americans.

In early July, when a few hot spots emerged, government officials started administering COVID-19 tests door-to-door in certain Melbourne neighbourhoods. We were back to closed state borders and only essential services open. On our team Zoom calls, we no longer swapped recommendations for online self-improvement classes or baking recipes. Instead, discussions around daily case numbers, rumours of a mythical, impending Stage 4, and vacation daydreams took their place.

Early August saw the number of new daily cases in Victoria reach the hundreds and sure enough Melbourne was plunged into Stage 4 lockdown — where boredom, anxiety, resentment and homesickness have been building ever since.

This is a very different reality than what I see when I log onto social media and digitally check in with my friends back in the U.S. Their posts show halfhearted attempts at wearing masks at bachelorette parties, groups going camping, friends having a “socially distanced” dinner party. They know COVID-19 is taking a tragic toll on Americans and are kind of trying to stop the spread. For the most part, these are weak attempts in comparison to Melbourne’s mandatory restrictions, and I’m left feeling resentful.

Even if I broke my visa status (essentially ending my loving relationship and quitting my job) and had enough funds to book an expensive, three-stop, 34-hour-minimum flight to the US, I wouldn’t be able to return to Australia.

Sure, I can send cards, care packages, and flowers to loved ones in America. We can FaceTime. But when can I hug them? When can I jump on a plane for a few hours and show up at their doorsteps? Hold their babies? Dance at their weddings? The five-kilometre travel limit and mandatory mask-wearing requirements are not the worst part. This question of “when” is what wrenches the heart.

Now, as restrictions finally start to ease, and there are whisperings of a Stage 3 relaxation on the horizon in November, people are starting to make plans. It feels like a big Melbourne family reunion is right around the corner. I just wonder when I’ll get to see mine.

So, Americans, beyond the public safety decency and quest to help those truly sick and dying: Please wear a mask, vote with compassion in November, and think of your expats, so one day the rest of us can come home.

In the meantime, I will revel in balcony “tailgates” with my partner as we watch Monday Night Football on a Tuesday, munch jalapeño poppers from Costco and remember to find joy in the mundane.

Covid Killed My Wife Six Months Ago. We’re Still Learning How To Grieve Her Loss