Marine biologists are racing against the clock to rescue survivors in a mass stranding of whales in Tasmania.

About 500 pilot whales became beached on a sandbar at Macquarie Heads off the remote west coast of the island on Monday, in the largest mass stranding ever recorded in the country.

On Wednesday, 380 whales were confirmed to have died, and 50 had been rescued.

Government scientists said it appeared that at least a third of the animals had already died. Pilot whales are a species of oceanic dolphin that can grow seven metres long and can weigh up to 1,000 kilograms.

Rescuers told a press conference on Tuesday they had developed a triage-style strategy. 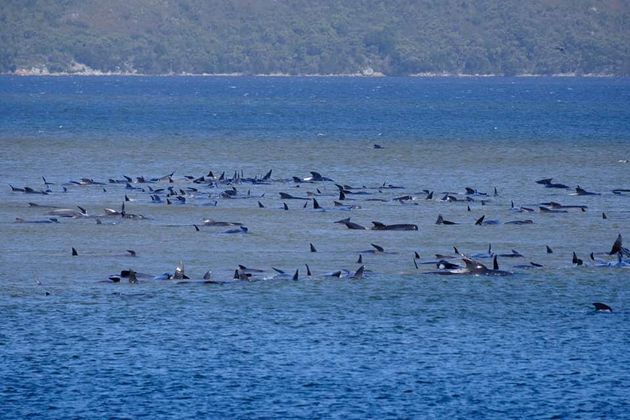 “We got animals spread over a large area and in really challenging locations. We’re going to basically take the animals with the best chance to start with and the ones that we are able to deal with,” a rescuer known as Chris told reporters.

“We’re going to refloat several animals and assess behaviour. So this entire operation, a lot of it depends on how these animals respond once they got water underneath them and are free-floating.”

Nic Deka, a regional manager for Tasmania Parks and Wildlife Service, said the delicate operation could take days and there are about 60 people involved.

“We have police assisting us. We got some folk from the fish farm assisting us and also a handful of volunteers,” he told reporters.

Tasmania Parks and Wildlife Service said as long as conditions stay the same and the whales remain wet, the animals could survive up to a few days. 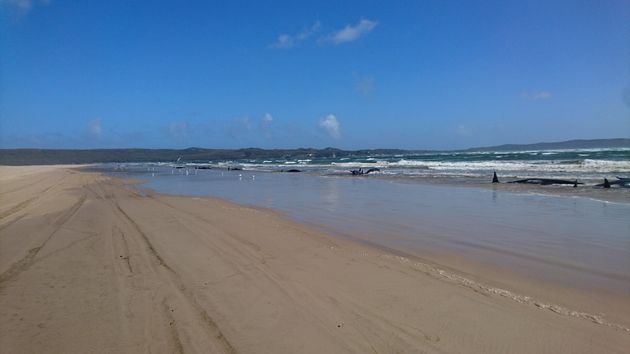 Local helicopter pilot Dave Paton, who is part of the rescue effort, flew overhead to assess the situation.

“We could visibly see them under some sort of stress there. So we tried to minimise the impact in the area,” Paton told ABC’s ‘News Breakfast’ on Tuesday.

“It’s not something you’d like to go out and see on a daily basis at all. There appeared to be two separate groups of pilot whales. A larger group closer to the boat ramp and another group further into Macquarie Harbour.” 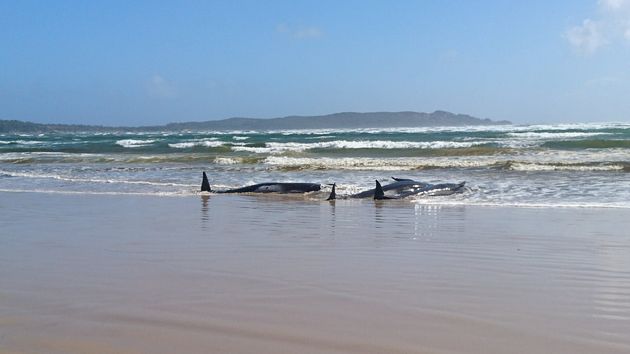 Officials usually respond to reports of strandings of dolphins and whales in Tasmania once every two or three weeks, on average.

“While strandings are not uncommon in Tasmania, and while strandings of this scale aren’t (unprecedented), we certainly haven’t had one for at least 10 years,” Deka said.

Experts had first thought the mass stranding involved about 70 whales when it was viewed from the air, but a closer inspection revealed the larger number.

It is not known why whales, which travel together in pods, sometimes beach themselves but they are known to follow a leader, as well as gather around an injured or distressed whale.

“Their social groups and strong bonding between the groups causes often all of them to strand,” Olaf Meynecke, a whale researcher and Project Manager of whales and climate at Griffith University, told Reuters.

Reuters contributed to this report.