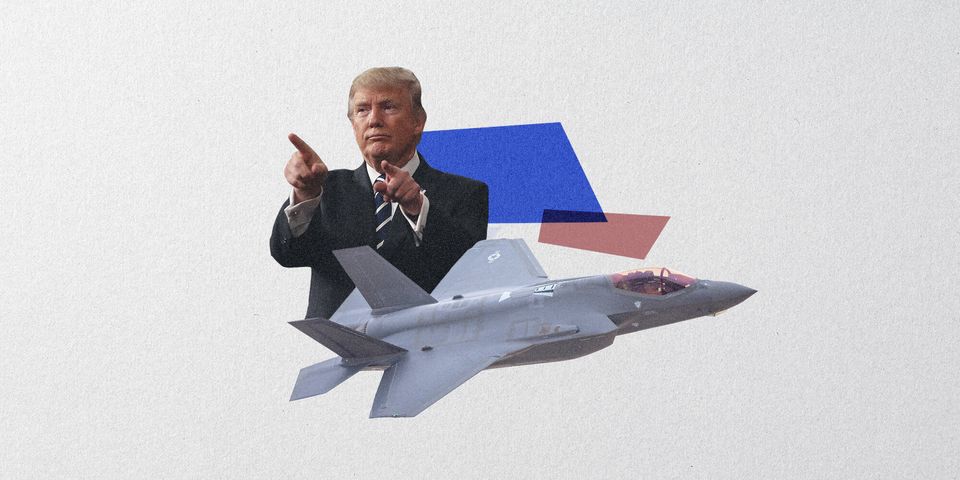 On March 20, 2018, President Donald Trump sat beside Saudi crown prince Muhammed bin Salman at the White House and lifted a giant map that said Saudi weapons purchases would support jobs in “key” states — including Pennsylvania, Michigan, Florida and Ohio, all of which were crucial to Trump’s 2016 election victory.

“Saudi Arabia has been a very great friend and a big purchaser of equipment … but if you look, in terms of dollars, $3 billion, $533 million, $525 million — that’s peanuts for you. You should have increased it,” Trump said to the prince, who was (and still is) overseeing a military campaign in Yemen that has deployed US weaponry to commit scores of alleged war crimes.

Trump has used his job as commander-in-chief to be America’s arms-dealer-in-chief in a way no other president has since Dwight Eisenhower, as he prepared to leave the presidency, warned in early 1961 of the military-industrial complex’s political influence. Trump’s posture makes sense personally ― this is a man who regularly fantasises about violence, usually toward foreigners ― and he and his advisers see it as politically useful, too. The president has repeatedly appeared at weapons production facilities in swing states, promoted the head of Lockheed Martin using White House resources, appointed defence industry employees to top government jobs in an unprecedented way and expanded the Pentagon’s budget to near-historic highs ― a guarantee of future income for companies like Lockheed and Boeing.

Trump is “on steroids in terms of promoting arms sales for his own political benefit,” said William Hartung, a scholar at the Centre for International Policy who has tracked the defence industry for decades. “It’s a targeted strategy to get benefits from workers in key states.”

In courting the billion-dollar industry, Trump has trampled on moral considerations about how buyers like the Saudis misuse American weapons, ethical concerns about conflicts of interest and even part of his own political message, the deceptive claim that he is a peace candidate. He justifies his policy by citing job growth, but data from Hartung, a prominent analyst, shows he exaggerates the impact. And Trump has made clear that a major motivation for his defence strategy is the possible electoral benefit it could have.

Next month’s election will show if the bargain was worth it. As of now, it looks like Trump’s bet didn’t pay off ― for him, at least. Campaign contribution records, analysts in swing states and polls suggest arms dealers have given the president no significant political boost. The defence contractors, meanwhile, are expected to continue getting richer, as they have in a dramatic way under Trump.

Trump has thrice chosen the person who decides how the Defence Department spends its gigantic budget. Each time, he has tapped someone from a business that wants those Pentagon dollars. Mark Esper, the current defence secretary, worked for Raytheon; his predecessor, Pat Shanahan, for Boeing; and Trump’s first appointee, Jim Mattis, for General Dynamics, which reappointed him to its board soon after he left the administration.

Of the senior officials serving under Esper, almost half have connections to military contractors, per the Project on Government Oversight. The administration is now rapidly trying to fill more Pentagon jobs under the guidance of a former Trump campaign worker, Foreign Policy magazine recently revealed ― prioritising political reasons and loyalty to Trump in choosing people who could help craft policy even under a Joe Biden presidency.

Such personnel choices are hugely important for defence companies’ profit margins and risk creating corruption or the impression of it. Watchdog groups argue Trump’s handling of the hiring process is more evidence that lawmakers and future presidents must institute rules to limit the reach of military contractors and other special interests.

“Given the hundreds of conflicts of interest flouting the rule of law in the Trump administration, certainly these issues have gotten that much more attention and are that much more salient now than they were four years ago,” said Aaron Scherb, the director of legislative affairs at Common Cause, a nonpartisan good-government group.

The theoretical dangers of Trump’s approach became a reality last year, when a former employee for the weapons producer Raytheon used his job at the State Department to advocate for a rare emergency declaration allowing the Saudis and their partner the United Arab Emirates to buy $8 billion in arms ― including $2 billion in Raytheon products ― despite congressional objections. As other department employees warned that Saudi Arabia was defying US pressure to behave less brutally in Yemen, former lobbyist Charles Faulkner led a unit that urged Secretary of State Mike Pompeo to give the kingdom more weapons. Pompeo pushed out Faulkner soon afterward, and earlier this year, the State Department’s inspector general criticised the process behind the emergency declaration for the arms. 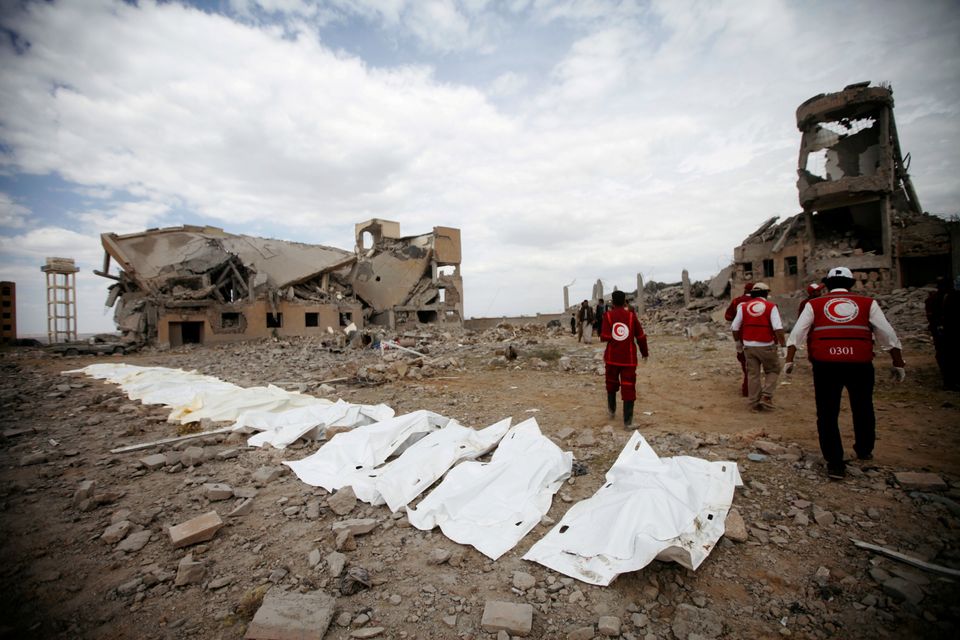 Even Trump administration officials not clearly connected to the defense industry have shown an interest in moves that benefit it. In 2017, White House economic advisor Peter Navarro pressured Republican lawmakers to permit exports to Saudi Arabia and Jared Kushner, the president’s counselor and son-in-law, personally spoke with Lockheed Martin’s chief to iron out a sale to the kingdom, The New York Times found.

When Congress gave the Pentagon $1 billion to develop medical supplies as part of this year’s coronavirus relief package, most of the money went to defense contractors for projects like jet engine parts instead, a Washington Post investigation showed.

“It’s a very close relationship and there’s no kind of sense that they’re supposed to be regulating these people,” Hartung said. “It’s more like they’re allies, standing shoulder to shoulder.”

In June 2019, Lockheed Martin announced that it would close a facility that manufactures helicopters in Coatesville, Pennsylvania, and employs more than 450 people. Days later, Trump tweeted that he had asked the company’s then-chief executive, Marillyn Hewson, to keep the plant open. And by July 10, Lockheed said it would do so ― attributing the decision to Trump.

The president has frequently claimed credit for jobs in the defence industry, highlighting the impact on manufacturing in swing states rather than employees like Washington lobbyists, whose numbers have also grown as he has expanded the Pentagon’s budget. Lockheed has helped him in his messaging: In one instance in Wisconsin, Hewson announced she was adding at least 45 new positions at a plant directly after Trump spoke there, saying his tax cuts for corporations made that possible.

Trump is pursuing a strategy that the arms industry uses to insulate itself from political criticism. “They’ve reached their tentacles into every state and many congressional districts,” Scherb of Common Cause said. That makes it hard for elected officials to question their operations or Pentagon spending generally without looking like they are harming their local economy.

Representative Chrissy Houlahan, a Democrat who represents Coatesville, welcomed Lockheed’s change of course, though she warned, “This decision is a temporary reprieve. … I am concerned that Lockheed Martin and [its subsidiary] Sikorsky are playing politics with the livelihoods of people in my community.”

The political benefit for Trump, though, remains in question, given that as president he has a broad set of responsibilities and is judged in different ways.

“Do I think it’s important to keep jobs? Absolutely,” said Marcel Groen, a former Pennsylvania Democratic party chair. “And I think we need to thank the congresswoman and thank the president for it. But it doesn’t change my views and I don’t think it changes most people’s in terms of the state of the nation.”

With polls showing that Trump’s disastrous response to the health pandemic dominates voters’ thoughts and Biden sustaining a lead in surveys of most swing states, his argument on defence industry jobs seems like a minor factor in this election.

Hartung of the Centre for International Policy drew a parallel to President George HW Bush, who during his 1992 reelection campaign promoted plans for Taiwan and Saudi Arabia to purchase fighter jets produced in Missouri and Texas. Bush announced the decisions at events at the General Dynamics facility in Fort Worth, Texas, and the McDonnell Douglas plant in St. Louis that made the planes. That November, as Bill Clinton defeated him, he lost Missouri by the highest margin of any Republican in almost 30 years and won Texas by a slimmer margin than had become the norm for a GOP presidential candidate. 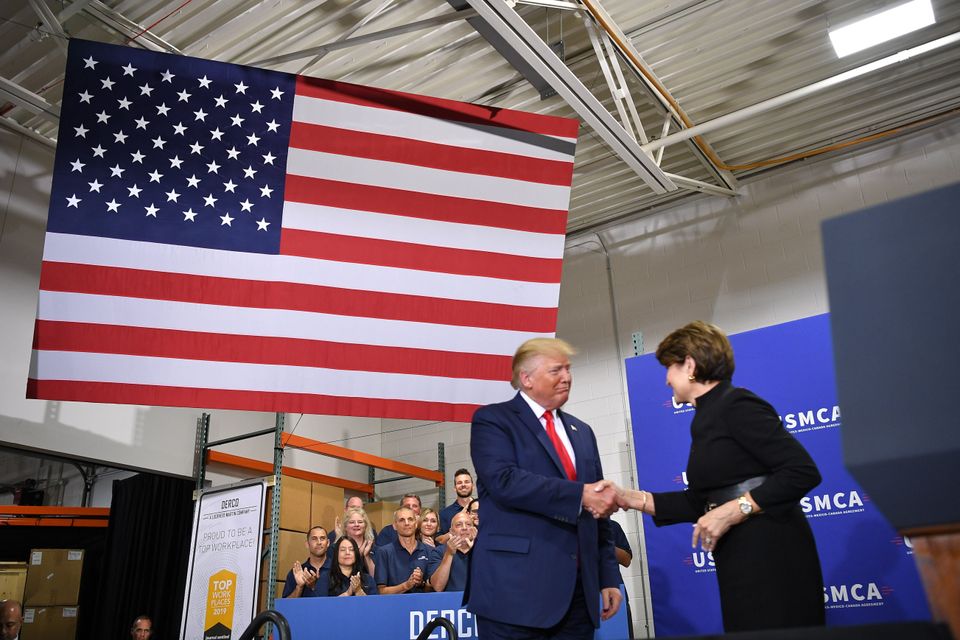 The defence industry can’t control whether voters buy Trump’s arguments about his relationship with it. But it could, if it wanted to, try to help him politically in a more direct way: by donating to his reelection campaign and allied efforts.

Yet arms manufacturers aren’t reciprocating Trump’s affection. A HuffPost review of Federal Election Commission records showed that top figures and groups at major industry organisations like the National Defence Industrial Association and the Aerospace Industries Association and at Lockheed, Trump’s favourite defence firm, are donating this cycle much as they normally do: giving to both sides of the political aisle, with a slight preference to the party currently wielding the most power, which for now is Republicans. (The few notable exceptions include the chairman of the NDIA’s board, Arnold Punaro, who has given more than $58,000 to Trump and others in the GOP.)

Data from the Centre for Responsive Politics shows that’s the case for contributions from the next three biggest groups of defence industry donors after Lockheed’s employees.

One smaller defence company, AshBritt Environmental, did donate $500,000 to a political action committee supporting Trump ― prompting a complaint from the Campaign Legal Centre, which noted that businesses that take federal dollars are not allowed to make campaign contributions. Its founder told ProPublica he meant to make a personal donation.

For weapons producers, backing both parties makes sense. The military budget will have increased 29% under Trump by the end of the current fiscal year, per the White House Office of Management and Budget. Biden has said he doesn’t see cuts as “inevitable” if he is elected, and his circle of advisers includes many from the national security world who have worked closely with ― and in many cases worked for ― the defence industry.

And arms manufacturers are “busy pursuing their own interests” in other ways, like trying to get a piece of additional government stimulus legislation, Hartung said ― an effort that’s underway as the Pentagon’s inspector general investigates how defence contractors got so much of the first coronavirus relief package.

Meanwhile, defence contractors continue to have an outsize effect on the way policies are designed in Washington through less political means. A recent report from the Centre for International Policy found that such companies have given at least $1 billion to the nation’s most influential think tanks since 2014 ― potentially spending taxpayer money to influence public opinion. They have also found less obvious ways to maintain support from powerful people, like running the databases that many congressional offices use to connect with constituents, Scherb of Common Cause said.

“This goes into a much bigger systemic issue about big money in politics and the role of corporations versus the role of Americans,” Scherb said.

Given its reach, the defence industry has little reason to appear overtly partisan. Instead, it’s projecting confidence despite the generally dreary state of the global economy: Boeing CEO Dave Calhoun has said he expects similar approaches from either winner of the election, arguing even greater Democratic control and the rise of less conventional lawmakers isn’t a huge concern.

In short, whoever is in the White House, arms dealers tend to do just fine.