“Would you shut up, man?” Biden asked Trump after the president repeatedly interrupted Biden’s response to a question about expanding the number of justices on the Supreme Court.

“The country would be better served if we allowed both people to speak with fewer interruptions,” Wallace said before directly asking Trump to keep things civil. “I’m appealing to you, sir, to do it.”

The rapid-fire interruptions throughout the night even got etiquette experts talking.

“Look, I know the realm of politics isn’t known for its politeness, but the incessant interruptions by the president ― both of the moderator and of his opponent ― was a disturbing spectacle to witness,” said Thomas P. Farley, an etiquette expert and host of the podcast “What Manners Most.”

“I think the president’s steadfast refusal to await his turn or to resist voicing a complaint was probably a turn-off for any viewer who had tuned in eager for a substantive debate over the very real issues facing the United States,” Farley told HuffPost.

People interrupt either as a classic bullying technique, combined here with Trump with low-impulse control, or an inability to cognitively follow the other person’s train of thought, thereby using interruption to mask this lack of comprehension.Jodi R.R. Smith, owner of an etiquette consulting firm

Jodi R.R. Smith, owner of an etiquette consulting firm, couldn’t help gaming out how Biden’s camp should handle the next debate to keep things more civil.

“If I was asked to advise the Biden team, I would recommend a [pre-debate meeting] with the moderator that has specific ‘if-then’ arrangements,” she mused. “If he interrupts during my responses, then his microphone will be turned off.” If he interrupts repeatedly, the other person should be given additional time to respond, starting when the opponent is silent, she said.

We asked etiquette experts like Smith and Farley ― and one family psychologist, for good measure ― to share how to talk to a chronic interrupter without losing your mind.

If you know you’re dealing with a repeat interrupter, plan for the worst.

Whether you’re dealing with an angry client, your partner, a snooty friend of a friend or your know-it-all college-aged son, if you’ve gotten into it with the person before, you know what to expect: more impossible conversation and lots of interruptions.

With your experiences in mind, stage as much as possible in advance and prepare yourself, said Diane Gottsman, an etiquette expert and owner of The Protocol School of Texas.

“Going into the conversation, find a neutral place to talk, speak for short bursts rather than monopolising the conversation and avoid an aggressive tone of voice,” she said. “Be open to listening to their point of view and watch your body language so you don’t send the message that you are closed to hearing their message.”

Recognise why they’re interrupting so often and don’t fall into the same trap.

Consider this the “know thy enemy” pointer: Generally speaking, motives for interrupting can be classified into two categories, Smith said.

“People interrupt either as a classic bullying technique, combined here with Trump with low-impulse control, or an inability to cognitively follow the other person’s train of thought, thereby using interruption to mask this lack of comprehension,” she said.

We all want to be of a calm, steady mind and express our thoughts and feelings coherently, but sometimes the excitement involved in the conversation gets the best of us. That’s when interruptions happen, said Ryan Kelly, a psychologist in Charlotte, North Carolina.

“Someone who is interrupting you is likely coming from an emotional state, whether it be through something harmless like excitement (e.g., someone with ADHD finishing your sentences) or something harmful like disrespect or emotional reactivity (e.g., pride, anger),” he said.

What’s important for you in these moments is “to not allow their interruptions to force you into an emotional mind, too,” he said. 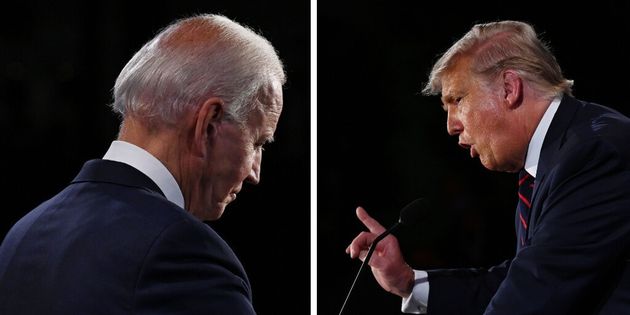 Think about being effective versus being right.

What should you do in the heat of the moment if you’re being interrupted? Take a deep breath, relax your shoulders and think about being effective versus being right.

According to Kelly, there’s a big difference: Of course you think your perspective is right, but if you’re having a healthy debate with a friend or family member with differing views, the goal is to hear each other’s side. That’s an effective dialogue.

If the other person continues to interrupt or make snide comments under their breath, try to reason with them.

The psychologist recommended saying something along the lines of: “I can tell you’re very passionate about this topic, and I very much appreciate that. And I’m really enjoying exchanging opinions and trying to understand yours, but when you interrupt like you’ve been doing ― which I don’t think you’re doing to be disrespectful, by the way ― I can’t address your points or express my points, which I personally need to have a conversation like this.”

You’re not perfect, so while you’re at it, admit that you’ve probably made some annoying interruptions along the way, too ― and that you want the other person to call you out if you do again.

Ideally, you set these baseline ground rules before you get into the thick of an argument, but if not, there’s nothing wrong with establishing them in the middle of a testy conversation, Kelly said.

Use your hands when you need to.

Sadly, like Wallace, you don’t have a mic cut function, either, but you can use your hands to act as a sort of pause button, Gottsman said.

That doesn’t mean you coil your hands into a confrontational, tightfisted gesture, though.

“Instead, if you can’t get the other person’s attention any other way, put your hand up and palm out with fingers showing the number five,” Gottsman said. “Then calmly say, ‘Let me finish.’ Pause, look at them, and if they continue to speak, look away. Sometimes you just need to disengage until they’ve stopped talking.” 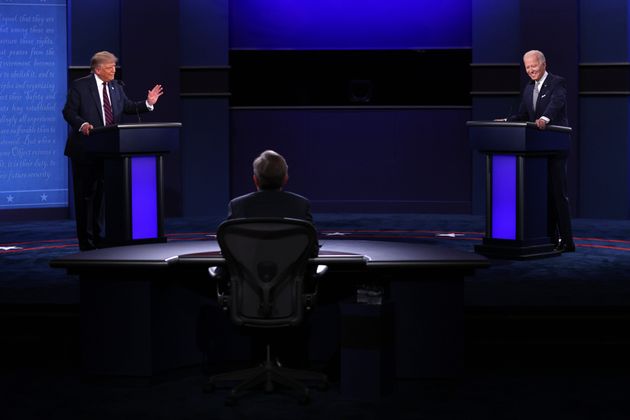 Stay calm and use humour to diffuse the situation.

Though Biden had his outbursts (“Would you shut up, man?” among them), for the most part, he stayed relatively calm when Trump tried to get a rise out of him. As Michael Barbaro on The New York Times “The Daily” podcast pointed out, at times Biden closed his eyes, almost like he was meditating (and certainly like he’d been trained by someone not to lose his cool).

Calmness is obviously an effective strategy for heated, interruption-heavy conversations, Farley said. So is humour.

“If you’re dealing with an interrupter, smile, laugh and don’t get defensive during the interruptions,” the etiquette expert said. “If the other person sees that you are not going to play this game but rather that you are finding the constant protestations amusing ― whether that’s true or not ― you may actually succeed in shutting down the interruptions altogether.”

If you’re looking for an example, Farley thinks Biden wielded humour effectively, too.

“He offered softly uttered interjections and light sarcasm,” he said. “For instance, after the Supreme Court judge back-and-forth, he said, ‘That was really a productive segment, wasn’t it?’ It showed he could have a sense of humour despite the chaos being wrought on the other side of the stage.”

Remember: It’s also okay to walk away from an emotionally overreactive person.

Biden (or Trump) probably wouldn’t have scored any points (or undecided voters) if he had simply walked off the stage, but there’s no reason you can’t leave a conversation when someone is steamrolling you.

“There is no reason even the most patient and considerate among us should ever feel stuck in a situation where someone in our midst is disrespecting us and interrupting us to the point of badgering,” he said.

“If any civilian ever encountered the kind of behaviour we saw at the debate,” Farley said, his advice would be this: “Do not dignify the other person with even one more moment of your presence.”

Look the person directly in the eye, Farley said, and simply say, “It’s a been a pleasure,” and confidently exit the scene.