How The Recession Will Actually Affect Your Day-To-Day Life

How The Recession Will Actually Affect Your Day-To-Day Life 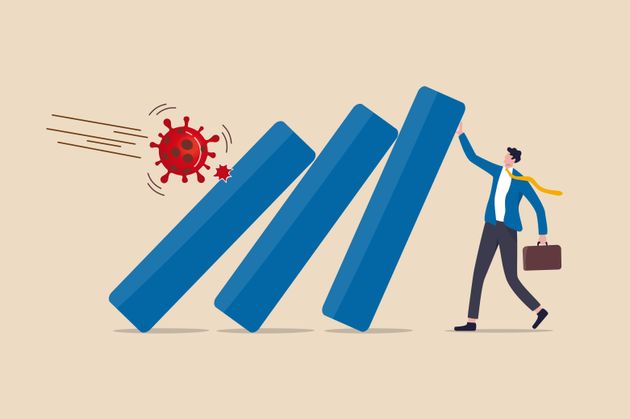 Recessions aren’t pretty, and the UK is in a big one – the largest one on record, to be precise, after the coronavirus pandemic sent the economy plunging by 20.4% between April and June.

A recession is defined as two successive quarters of decline in gross domestic product (GDP). And we’re now facing that because lockdown meant many businesses shut up shop for a long period of time – resulting in the red drop on the graph below. 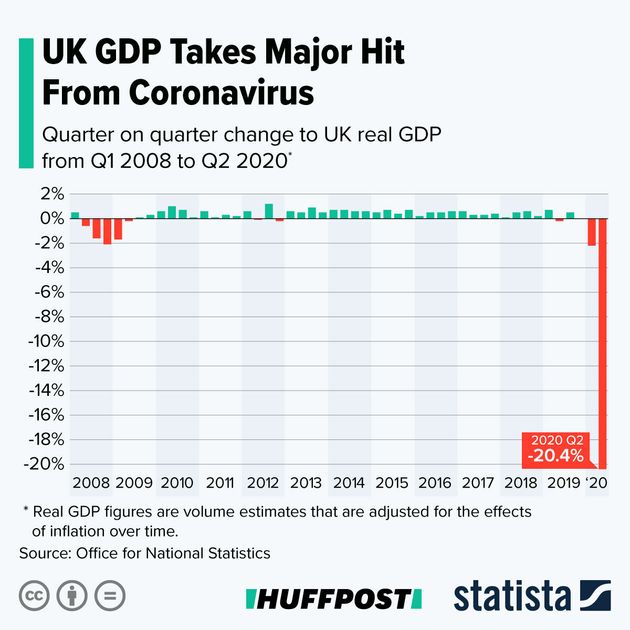 Monthly figures showed the economy bounced back by 8.7% in June, following upwardly revised growth of 2.4% in May, as lockdown restrictions eased. While this is positive, it’s nowhere near where it needs to be.

But these percentages and graphs don’t tell us much about how our lives will actually change. Rather than stats on GDP growth, you probably want to know: what does a recession mean for me?

We’ll break it down for you. (You might want to grab a brew.)

Your job could take a hit

The impact of the recession has already been felt by tens of thousands of people in the UK who’ve lost their jobs since the pandemic hit. Some industries have been totally decimated, with people forced to look for jobs in different fields due to not knowing when their industry will return – if ever. The jobs market is also incredibly competitive, as thousands apply for the same roles.

Dr Kemar Whyte, a senior economist at the National Institute of Economic and Social Research (NIESR), tells HuffPost UK most of the impact from the recession will be on people’s jobs and incomes.

“When there’s a recession, there will be a lot of job loss,” he says. “It’s also quite unlikely you’ll have people getting salary increases and promotions. So our finances will be affected by this.”

With incomes affected across the board, this is likely to have a knock-on effect on everything else. “A lot of life hinges on the money that we earn and this is where all of the issues will stem from,” he says.

Your living situation could be affected

Loss of income can have repercussions on the housing sector, because tenants may no longer be able to pay rent, which will affect access to housing, says Dr Whyte. This can also lead to landlords selling up, rather than facing the prospect of fronting up costs themselves. If that doesn’t happen, a recession can also see the price of rent go up, points out Adam McKay from The Tenants Voice, a website offering expert advice and support for renters.

There’s already been talk of young people – and even people in their 30s – moving back in with their parents due to loss of income or lack of job opportunities because of the pandemic.

While the government’s stamp duty holiday has given people impetus to move, the recession might mean that house prices drop because there are more houses on the market and less demand as people are losing their jobs. So, if you’re selling, your property might not sell for as much as you’d hoped. But if you’re buying, you might get a bargain.

Taking out a mortgage might be harder as banks will want to lend less money overall – this means you could be asked to stump up a bigger mortgage deposit than usual, but would also mean your monthly mortgage payments should be lower. If you’re looking to buy, now’s the time to speak to a mortgage broker as they can help you navigate the trickiness of it all.

Usually, inflation tends to fall during a recession, so things become a bit cheaper as there’s less demand in the economy for goods.

Professor Ratula Chakraborty, an expert in business management at the University of East Anglia, predicts prices will be pretty flat for most goods, while there’s less demand and key input costs, like oil prices, remain low. “Indeed, we could see deflation for some goods as consumers become reluctant to spend money when fearing they’re at risk of losing their jobs,” she says.

But the exception might be where Brexit creates problems, she suggests, with international trade and increases in transport costs and delays. This could mean some fresh food prices might rise, and we might also see higher prices on medicines where importing goods becomes more expensive.

Dr Whyte believes we might also see inflation caused by the easing of the pandemic. “At the moment, because demand is tempered now due to people not having as much income, people not working as much, and because of social distancing, we don’t have as much demand for products – so we don’t have that demand pull inflation at the moment,” he explains.

But as more businesses begin to reopen, we might see prices go up because companies are trying to claw back some of the money they lost during the prolonged period of being closed. “We might have some cost push inflation because firms will face higher costs and firms will try to make up what they’ve lost during this,” he says. “From personal experience, when my barber reopened he immediately told me it would be £10 extra for my haircut.”

Alongside this, we have “pent-up demand” from consumers, because everything has been closed. Dr Whyte says when lockdown measures are fully eased and social distancing becomes a thing of the past, “we will then see some potential price rises”. Great.

Taxes will go up

Nobody likes to talk taxes, but the reality is that to pay off the huge debts the UK has accrued during the pandemic, taxes will inevitably rise.

“It has to [rise],” says Dr Whyte. “But not immediately, because right now there’s a lot of pressure on businesses and consumers alike. At the moment I don’t foresee, or think that there should be, any sort of tax rise. I think it’ll come next year.”

What kind of taxes we’ll see is another story. “The job on the government’s hands now is how it goes about administering this tax increase,” says Dr Whyte. One option might be to raise income tax, but there’s also the option to instigate a wealth tax, he says. This is pretty much what it says on the tin: a tax on net worth meaning rich people would get taxed more, which would help to reduce widening inequality.

Prof Chakraborty expects to see stealthy tax changes rather than blatant ones, such as increasing “sin taxes”, like on alcohol and tobacco, on the justification of supporting public health measures.

Low-paid workers and young people will be hit hardest

“What normally happens in a recession, and it’s very likely in this particular recession, is that the impact isn’t normally felt equally across income levels,” says Dr Whyte. “It’s usually those lower-skilled or lower-paid workers that are normally more affected by a recession. This will obviously then exacerbate the inequality issue that’s currently present in the UK – and worldwide.”

It’ll also impact young people disproportionately, as we saw from the recession in 2008. “Recessions have a lasting impact on those affected in terms of lost income and lost job opportunities for career progression,” says Prof Chakraborty, “and we can expect this particular recession to be especially hard on young adults seeking their first jobs or at risk of losing their jobs in service sectors greatly affected by lockdowns and travel restrictions.”

Are there any positives?

It’s pretty easy to feel disheartened by all of this, but it’s worth noting recessions can also be places where people find their feet – for example, if they find a gap in the market with a business idea or offer a product that’s in high demand.

Ultimately though, recessions are tough – and in the coming months (and years) we’ll need to be kind to ourselves and simply do the best we can.

‘My Baby Was So High Up, She Got Stuck In My Pelvis’

The Key To Treating Covid-19 Could Be In The Nose