A rule-breaking Bolton man who went on a pub crawl instead of self isolating after returning from holiday is partly to blame for the town’s “extreme spike” in coronavirus cases, the council leader has said.

David Greenhalgh, Bolton council leader, says the man went on holiday and went out drinking almost immediately after returning home to Bolton – even though he was supposed to be quarantining.

Greenhalgh told BBC Radio 4’s Today Programme that high rate of Covid-19 cases had been linked back to pubs and a “cohort of people” who refused to follow the guidance. 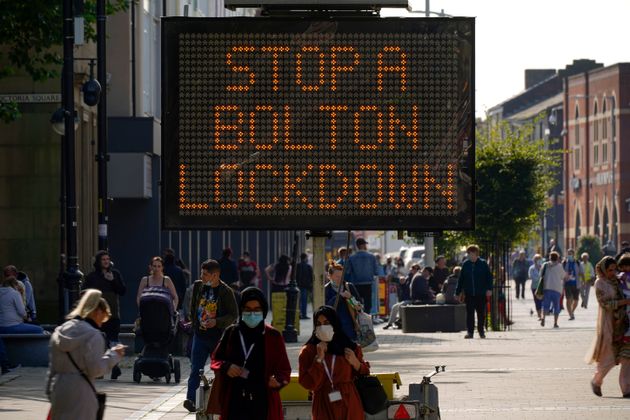 This led to Bolton having the highest infection rate in England and stricter restrictions were imposed to try to curb the soaring cases.

“We had somebody who did not adhere to quarantine, did not stay the 14 days, literally went on a pub crawl with a number of mates,” said Greenhalgh.

“From that incident which took place over a weekend – they visited a number of premises -– led to a large number of individual transmissions from that one person which you can imagine then is like holding back the tide because he then became symptomatic two days after they had all gone on this pub crawl.

“That is four or five days where all the people he was in contact with have been going about their normal day-to-day business.”

The news of the rule-breaker has angered many people on social media – but others have questioned the rise being blamed on the actions of one person.

The dickheads in Bolton who went on a pub crawl after catching Covid, I hope he has to pay for the Lockdown. If he has no money, he should be made to work for nothing and then stoned to death by people suffering because of his stupidness.

The selfish shit stain on society who went in a pub crawl instead of self isolating should be identified to the public, assuming he had a job his boss needs to know the type of human sewage he employs, charged with assault, GBH & if anyone in Bolton dies in 2nd wave manslaughter

@lordfarmer Talking about Covidiots, have you heard about the lad in Bolton? Went on holiday, came back & didn’t self isolate as he was meant to, went on a pub crawl & is now responsible for over 200+ positive test results & is being blamed for the reason Bolton is so high 🤦‍♂️

i have never been one for vigilantism, shaming etc but the twat who came back off holiday, didnt isolate but chose to go on a pub crawl with friends in Bolton ..which the council leader says has led directly to the town having UK’s biggest outbreak ..deserves some attention!

Evidently a guy from Bolton came back from abroad, tested positive for Covid, was told to isolate, went on a pub crawl. Now Bolton’s in lockdown. As the guy is presumably known, has he been punished?

If, as a Bolton Councilor claims, someone who returned from holiday did not isolate but went on a pub crawl with mates. Hope the Councillor has a name and identifies the offender. Maybe even inform the Police with details.

Absolutely howling at the fact they are trying to pin the blame on one person from Bolton going on a pub crawl after coming back from holiday and not quarantining. Anything to make the Bolton lockdown seem justifiable.

Bolton is under tougher coronavirus measures than most of England, with hospitality venues only allowed to operate as takeaways and ordered to shut by 10pm.

However, areas in the north west, West Yorkshire and the Midlands will also see tougher restrictions come into place from Tuesday to control the spread of coronavirus following a rise in cases.