We do love an early morning innuendo on breakfast telly, and Good Morning Britain served up a corker on Friday.

Before you go getting any ideas, though, we should stress that he was chatting about her kitchenwear.

Jacqui appeared on GMB live from home as part of a panel discussion, but Ben quickly noticed something was looking a little different to usual. 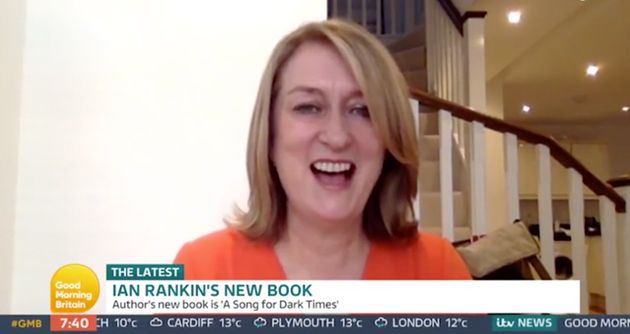 “We are missing the jugs though!” Ben said. “We don’t want people moaning about the lack of jugs.”

Now, for those that are either a) unobservant, or b) don’t usually watch GMB, what you won’t know is that Jacqui usually sets her camera up in her kitchen, showing off her lovely collection of jugs.

However, Kate failed to recall that detail and looked stunned at Ben’s comment.

“What?! What are you talking about?” she said.

“Kate! You know I usually have my jugs on display when I come on Good Morning Britain!” Jacqui laughed.

“Kate never pays attention to what’s going on in the background,” Ben said.

“No I’m listening to what she has to say, I’m not staring at her jugs!’ Kate joked.

‘Usually, I have my jugs on display when I come on Good Morning Britain’ – @Jacqui_Smith1

There was a bit of confusion about Jacqui’s jugs when she spoke to Ben and Kate about Strictly. 🤣

But did you notice there was one thing in common? pic.twitter.com/yJhZKnpowP

Jacqui is currently gearing up to take part in this year’s Strictly Come Dancing.

She is one of 12 celebrities taking part on the BBC ballroom show, although there’s no word yet as to whether her famous jugs will be making a cameo appearance.