Game Of Thrones stars Rose Leslie and Kit Harington have announced that they are expecting their first child together.

The couple met on the set of the hit fantasy show – where Rose played Ygritte for three series, and Kit portrayed Jon Snow – and got together in 2012.

Since then, they have kept a low profile when it comes to their relationship, with Rose choosing to reveal she’s expecting in an understated way, in a photo-shoot with Make magazine, in which her pregnancy bump is visible.

The magazine’s fashion editor Ursula Lake shared one such picture on Instagram, writing: “So wonderful working with the beautiful Rose Leslie for the cover story of Make magazine out now!

“A very special all-woman team photographic shoot capturing Rose at this wonderful time as she prepares for motherhood for the first time!”

So wonderful working with the beautiful Rose Leslie for the cover story of @make_magazineuk out now! A very special all woman team photographic shoot capturing Rose at this wonderful time as she prepares for motherhood for the first time! My team were: @billiescheepersphotography @liztaw doing beautiful hair and @justinejenkins wonderful makeup. Rose wears @stellamccartney. Huge thanks to @vrwpublicity for organising the shoot and to Hannah Rand for her interview. #roseleslie #makemagazine #rose #portraitphotography #portrait #interview #covershoot #cover #stellamccartney

In the accompanying interview, Rose spoke about her home with Kit in the English countryside, saying she was looking forward to raising a family there, after years of living in New York.

“What a glorious thing to be able to run to the countryside and recoup,” she said.

“It’s a great privilege to be surrounded by greenery, birdsong and hedgerows, and our delightful neighbours. It’s so peaceful.” 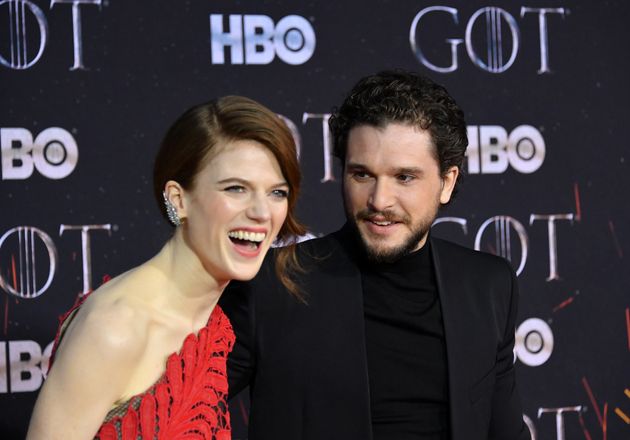 Kit and Rose announced their engagement with a post in The Times newspaper’s Births, Marriages and Deaths page in 2017, five years after their first got together.

They eventually tied the knot a year later at Rose’s family’s castle in Wardhill, Aberdeenshire, with former co-stars Maisie Williams, Peter Dinklage, Emilia Clarke and Sophie Turner all in attendance.