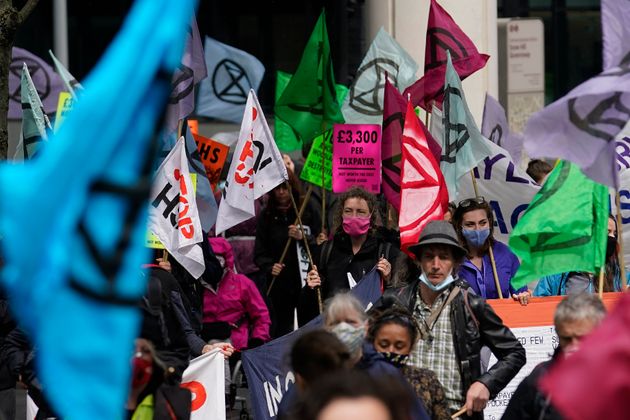 Extinction Rebellion has accused the Met Police of “trying to crush” protests after it received a copy of an open letter from the force warning against mass gatherings – despite political protests being exempt from the legislation.

The letter, which Scotland Yard said was sent to a number of organisers planning gatherings over the bank holiday weekend and beyond, “strongly advises” against attending large gatherings and states that those who organise or attend could be committing a criminal offence.

But Extinction Rebellion have fiercely criticised the letter, highlighting the exemption of “political bodies” – as set out in the Health Protection Regulations 2020 – and have accused the force of attempting to shut down their protests.

The environmental group on Friday launched a bank holiday weekend programme of non-violent, disruptive protests taking place across the UK, with airports, oil companies and HS2 sites all set to be targeted by protesters.

From September 1, thousands will gather in London, Cardiff and Manchester for further protests, specifically targeting seats of power such as Westminster.

“We think that is wrong. The right to assemble and protest is an enduring one, and the current regulations clearly permit supporters of Extinction Rebellion, as a political movement, to gather, provided that care is taken to do so safely.

“XR is well aware of the regulations, and this attempt by the police to draw attention to them seems to be directed at creating anxiety about being involved in protest. The police should focus on supporting and facilitating peaceful protest, rather than wasting everybody’s time and effort by trying to crush it.”

The letter from the Met Police states that organising, attending or encouraging others to attend could constitute an offence, adding that fines could be imposed on those breaking the rules. On Friday, new legislation introducing fines of up to £10,000 for event organisers was brought in.

The letter does state that “certain types of body” are exempt from the rules, provided they cary out full risk assessments and limit where possible the spread of the virus. The examples of exempt groups they provide are businesses and charities, but public and political bodies – which are included in the legislation itself – are not included in the letter.

As an organisation campaigning for a change in governmental policy, Extinction Rebellion have said they have a legal right to be regarded as a political body and therefore exempt from the restrictions on gatherings.

The legislation itself specifically states that political body refers either to a political party or a political campaigning organisation – which “promote[s], or oppose[s], changes in any law applicable in the United Kingdom or elsewhere, or any policy of a governmental or public authority.”

Paul Stephens, a former officer and member of Extinction Rebellion’s police liaison team said: “The exceptions they [the police] list are businesses and charities and they didn’t mention protests. Of course in the regulations, political protests are actually in there.

“So it’s really an empty letter which is a vague threat against coming out to protest such a serious thing as extinction.

“I don’t think it’s very helpful not to tell the truth completely, it’s playing a political game and we’re going to challenge that as we go forward.”

Expert lawyers have also weighed in on the letter, highlighting the fact that the regulations specifically permit political gatherings and adding that police should not be “attempting to deter protest by sending letters out to political groups containing vague threats”.

Jules Carey, of Bindmans Solicitors, who represents Extinction Rebellion, said: “The right to protest is a key aspect of a democratic society and a fundamental right.

“The coronavirus regulations restricting gatherings specifically permit  gatherings by political groups, although they require assessments to be made and measures to be taken to limit the risk of transmission of the virus. Police forces should be using their best endeavours to facilitate protest and ensuring that they take appropriate precautions when approaching protesters in order to protect the protesters health as well as their own.

“Police forces should certainly not be attempting to deter protest by sending letters out to political groups containing vague threats of sanctions under the corona virus regulations”.

Extinction Rebellion’s case bears similarities to that of Ken Hinds, a community activist based in London who was told he could face police investigation after going to the force to ask for help facilitating an antiracism march from Notting Hill on Sunday.

The Guardian reported that even just by publicising the protest he was at risk of investigation, according to the Met, despite the fact that his event – like Extinction Rebellion’s protests – were being lawfully held as a political protest.

The police have since retracted their warnings of an investigation and have admitted that the protest met the criteria of a political body, meaning the protest can now take place.

Solicitor Lochlinn Parker, who represented Hinds, said: “Mr Hinds is obviously pleased that the protest can now go ahead without the threat of prosecution, but protesters should not have to have to instruct lawyers to help them exercise their rights to freedom of expression and assembly.”

A Met spokesperson said: “Our advice is to carefully consider the Health Protection Regulations relating to gatherings. Contravening this legislation could result in anyone involved in the holding of a large gathering (over 30 people) being subjected to a significant financial penalty. These regulations, have been designed to help protect people from coronavirus.

“In most locations participation in gatherings over 30 persons is an offence unless the gathering comes under one of the exemptions in the Health Protection (Coronavirus, Restrictions) (No. 2) (England) Regulations 2020.

“Officers will continue to engage and encourage Londoners looking to attend an event of their obligation to adhere to these regulations.”