England And Scotland At Odds Over Face Masks In Schools

England And Scotland At Odds Over Face Masks In Schools

Secondary school students in Scotland may soon be asked to wear face coverings – but England has no plans to follow suit.

Scottish first minister Nicola Sturgeon said the government was consulting teachers and councils on whether pupils should wear masks in corridors and communal areas where there is a higher risk of Covid-19 transmission.

It comes after a number of schools have been hit with coronavirus cases following the reopening of Scottish classrooms from August 11, although Sturgeon has said these infections are mainly being picked up in the community away from education.

But despite English schools reopening from next week, Downing Street said Boris Johnson had no plans to explore similar guidance, once again putting the two UK countries at odds over their coronavirus responses.

“There are no plans to review the guidance on face coverings in school,” a No.10 spokesperson told reporters, in response to Sturgeon’s announcement.

They added: “Our guidance does not recommend face coverings as pupils and staff will mix in consistent groups and we acknowledge that face coverings could obstruct communication between teachers and pupils.” 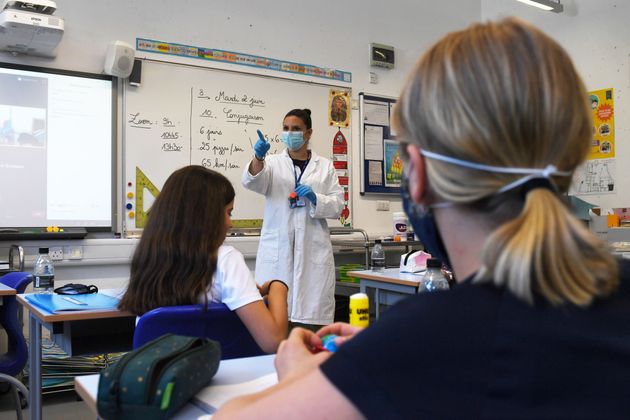 Sturgeon said new guidance on face coverings in schools was in its “final stages” and that Scottish education secretary John Swinney was consulting on its introduction.

She said: “We’re consulting on this specific measure because, firstly, mixing between different groups is more likely in corridors and communal areas – increasing the potential for transmission.

“Secondly, crowding and close contact in these areas is more likely and voices could be raised, resulting in greater potential for creating aerosol transmission.

“Finally, there’s also less scope for ventilation in these areas.”

The first minister said that decisions would be made in the coming days on whether the guidance should be extended to school transport.

There are currently no plans for mandating coverings in class in Scotland, she said.

It came after UK schools minister Nick Gibb on Monday morning said masks were “not necessary” for staff and pupils when schools in England reopen.

Gibb said as long as schools put in place the hygiene measures outlined in government guidance in early July, face coverings will not be required to stop the spread of coronavirus.

He was backed by child health professor Calum Semple, who sits on the government’s Scientific Advisory Group for Emergencies (Sage), who said the evidence for wearing masks in school was “fairly weak”.

Semple said there was more of a risk from parents meeting at the school gates, or going for a coffee after dropping their children off, and urged them to follow social distancing rules.

The pair spoke as the prime minister returned to work from his holiday in Scotland with a plea to parents to send their children back to the classroom when schools reopen, having been largely closed since March because of the pandemic.

PM Opposes Calls To Ditch Rule Britannia At Last Night Of The Proms, No.10 Signals